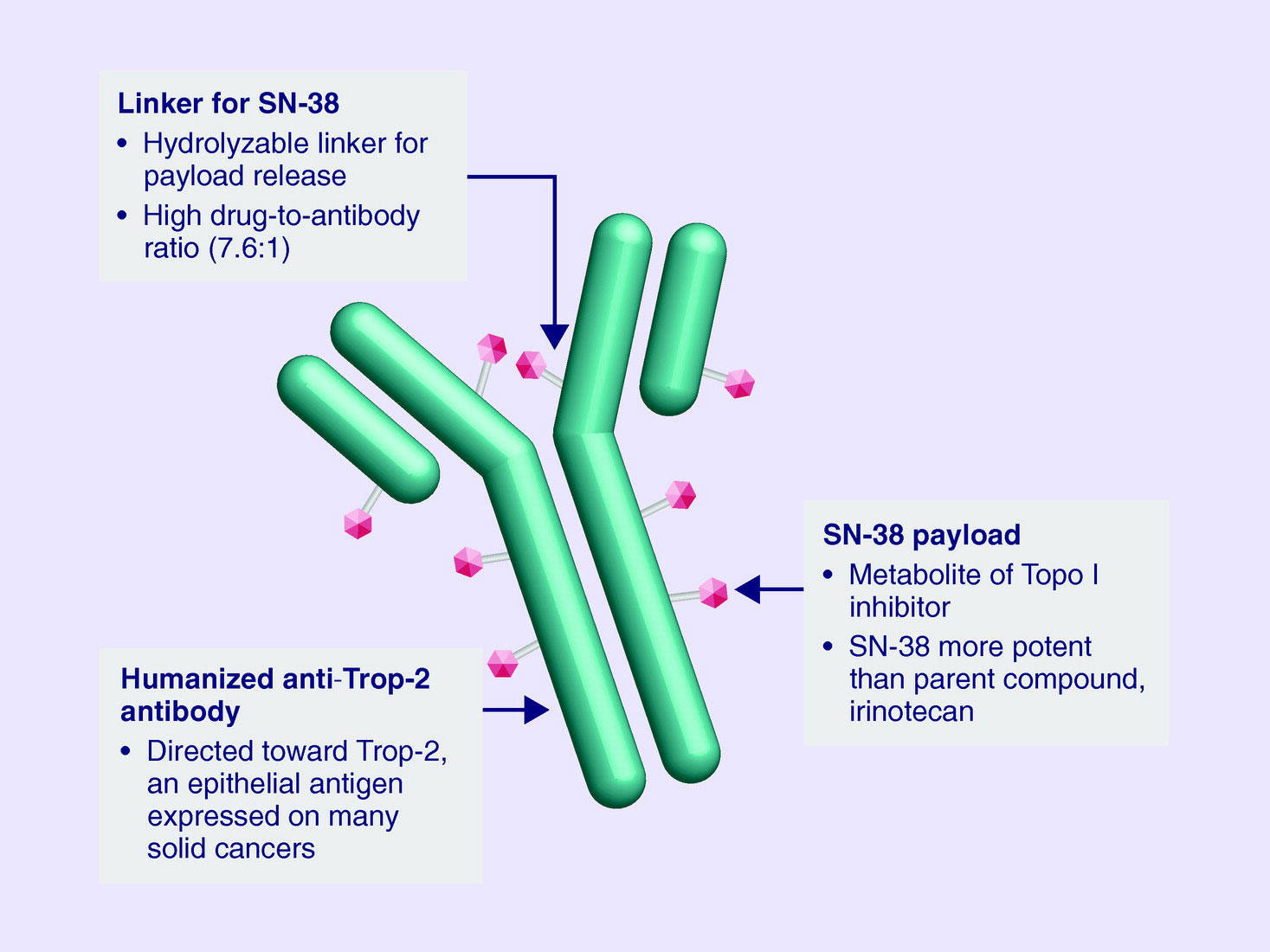 On April 22, the Food and Drug Administration (FDA) approved sacituzumab govitecan (Trodelvy) for the treatment of some patients with a particularly aggressive form of breast cancer called triple-negative breast cancer.

The approval covers the use of sacituzumab govitecan in adults with triple-negative breast cancer that has spread, or metastasized, to other parts of the body. Under the approval, patients must have already undergone at least two prior treatment regimens.

The new approval was based on findings from a phase 2 clinical trial that was sponsored by Immunomedics, the drug’s manufacturer. The trial enrolled 108 patients with metastatic triple-negative breast cancer, and all the participants received sacituzumab govitecan.

One-third of the patients who received sacituzumab govitecan had a tumor response, meaning their tumors shrank by at least 30%, according to results from the trial published last February in the New England Journal of Medicine. The response lasted an average of 7.7 months, which is very promising for this specific group of patients, said Stan Lipkowitz, M.D., Ph.D., chief of the Women’s Malignancies Branch in NCI’s Center for Cancer Research, who was not involved in the study.

Breast cancer is divided into subtypes based on how much estrogen receptor and progesterone receptor (known as hormone receptors) or human epidermal growth factor receptor 2 (HER2) is present on the surface of the cancer cells. All three receptors are known to fuel the growth of breast cancer, and drugs that block their activity are a mainstay of breast cancer treatment.

However, one potential target, a protein called Trop-2, is present at high levels in triple-negative breast cancer and in other cancers. Several drugs that target Trop-2 have been developed, though sacituzumab govitecan, a type of therapy called an antibody‒drug conjugate, is the first Trop-2-related therapy to be approved by FDA.

“It’s what we call a ‘smart bomb’ idea, where you target the toxin directly to the cancer cell,” said Hope S. Rugo, M.D., director of Breast Oncology and Clinical Trials Education at the University of California San Francisco, who was a principal investigator of the study.

Many drugs that are effective at killing cancer cells also kill normal cells and cannot be safely administered to patients. One solution researchers have developed is to link some of these drugs to an antibody, which renders the drugs inactive until they are released specifically in cancer cells that are targeted by the antibody.

One reason SN-38, which is the activated form of the commonly used chemotherapy drug irinotecan (Camptosar), was chosen for this antibody‒drug conjugate is because it is not highly toxic, explained Dr. Rugo. Using a less toxic drug linked to the right tumor-targeting antibody allows for higher doses of the drug to be given while limiting severe side effects that can cause patients to stop treatment early.

Using SN-38 as part of an antibody‒drug conjugate could be a particularly good choice of drug for patients with triple-negative breast cancer, added Dr. Lipkowitz. The patients in the trial were likely to have already received one of several types of chemotherapies that can cause numbness and pain in the hands and feet, called peripheral neuropathy. Peripheral neuropathy can be severe enough to prevent patients from continuing to receive treatment. SN-38 does not cause these problems, so it can be administered without worsening these difficult side effects. In fact, less than 3% of the patients in the trial discontinued treatment due to side effects.

Some of the most common severe side effects caused by sacituzumab govitecan were neutropenia (low levels of a type of white blood cell called neutrophils), anemia, and diarrhea.

Sacituzumab govitecan was given an accelerated approval by FDA based on the overall response rate and on how long those responses lasted in patients in the trial. Instead of waiting for data on whether the drug actually extends survival, which can take additional months or years to collect, under the accelerated approval process a drug can be approved based on surrogate endpoints. The drug company will need to conduct additional studies to confirm that sacituzumab govitecan has clinical benefits for these patients.

In this case, the approval was based on evidence that sacituzumab govitecan shrinks tumors. In patients with triple-negative breast cancer, FDA considers tumor shrinkage to be reasonably likely to predict real clinical benefits, such as increased time before the tumor begins to grow or possibly increased survival, Dr. Lipkowitz explained.

The original trial initially recruited patients with a number of different cancer types, Dr. Rugo said. The investigators chose to expand enrollment of patients with triple-negative breast cancer due to promising preliminary results and the lack of effective drugs for these patients. Additional trials testing sacituzumab govitecan on other tumor types are ongoing.

“I think it’s really exciting to have new agents,” said Dr. Rugo. “It’s offering new hope for our patients who have a really resistant cancer.”