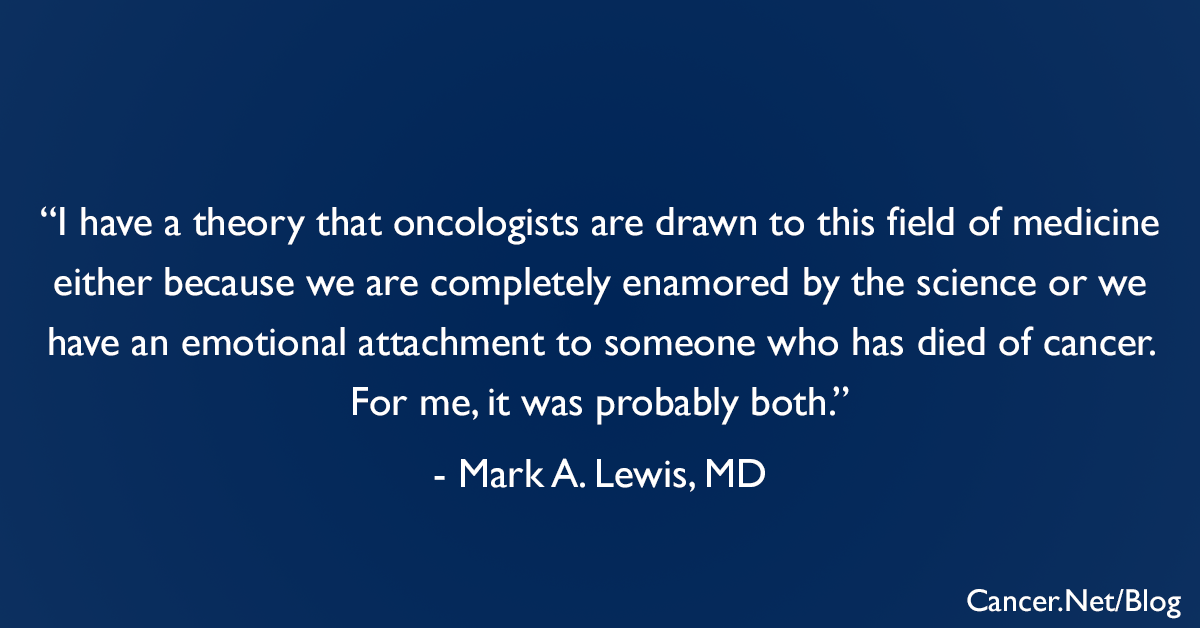 Dr. Lewis is Director of Gastrointestinal Oncology at Intermountain Healthcare Utah; Vice President of American Multiple Endocrine Neoplasia Support; Head of the Communications Committee for the North American Neuroendocrine Tumor Society; and a member of the Board of Directors for the Neuroendocrine Tumor Research Foundation. You can follow him on Twitter.

My father died of thymic cancer when I was 14, and that’s when I decided I wanted to become an oncologist. Ironically, the first patient I diagnosed with cancer was me. In 2009, during my first week of training in hematology/oncology at the Mayo Clinic in Rochester, Minnesota, I began having severe abdominal pain, which had plagued me on and off for years. Laboratory tests showed that I had high levels of calcium in my blood, called hypercalcemia. I remembered my father had suffered from hypercalcemia his whole life. In fact, several members of the paternal side of my family had an unusual run of bad luck when it came to their health and died in middle age.

My father, a clean-living minister and theologian, died at the age of 49. His brother died at the age of 52 from an unusual pituitary tumor that affected his vision and ultimately led to a stroke. My paternal grandfather, who was also a minister, suddenly became unable to speak in his 60s and had a mysterious mass in his chest that was never formally diagnosed. All of these relatives went to their graves never knowing what was killing them and thinking that all their health conditions were a coincidental misfortune.

The discovery that I, too, had hypercalcemia convinced me that my relatives’ ill health was no random happenstance. Rather, it was most likely the result of a genetic defect that caused multiple endocrine neoplasia type I (MEN1), and it was likely that I probably had inherited the defective MEN1 gene as well. Subsequent testing proved I was right.

Coping with an inherited disease

MEN1 syndrome predisposes people with the condition to benign or cancerous, also called malignant, tumors in their endocrine organs. In my case, I have developed benign tumors in my parathyroid and malignant ones in my pancreas. At age 30, I had surgery to remove my parathyroid gland because the tumors were leaching calcium from my bones and causing osteoporosis. Since then, my calcium levels have stabilized, and my bone density has returned to normal.

By 2017, my pancreas was full of tumors. The largest one had grown over the course of a year and threatened to spread to my liver, so I decided to undergo Whipple surgery. During Whipple surgery, the surgeon removes the head of the pancreas, the part of the small intestine called the duodenum, the bile duct, and the stomach, then reconnects the digestive tract and biliary system. So far, all my surgeries have been preventive or corrective, and I remain healthy today.

In the event the cancer does spread to my liver, I will most likely have to undergo chemotherapy or some other systemic therapy. Although I dread the day when that might happen, I’m encouraged by the many people with endocrine tumors I have treated with systemic therapy and who today live close to normal lives. I am the fortunate beneficiary of their successes. In many ways, they are preparing me for whatever the future might hold, and I feel privileged to be in this position of both patient and physician.

Loving the practice of oncology

I have a theory that oncologists are drawn to this field of medicine either because we are completely enamored by the science or we have an emotional attachment to someone who has died of cancer. For me, it was probably both. After my father died, I knew I wanted to be a doctor and, more specifically, an oncologist. I was lucky to be mentored by my father’s oncologist, who took me under his wing and allowed me to work in his practice throughout high school and college.

What impressed me the most during those years was the close relationship—bordering on friendship—the physician had developed with his patients. In addition to recording all the pertinent details of his patients’ treatments and medical progress into their charts, he would also include information about their families and important milestones in their lives. He personalized every encounter, treating everyone as a human being and not just as a tumor inside a host. I have tried to emulate him and incorporate those qualities into my own gastroenterology practice.

MEN1 syndrome affected the first-degree male relatives in my family, and I have passed the inherited condition on to my 9-year-old son, Alan. Thankfully, my daughter Emma, 12, does not have the MEN1 gene alteration. My wife Stasha, a pediatrician, and I have explained to Alan that he will have this condition his whole life. But we’ve also explained that if he is vigilant and monitored closely, he will not have the outcome his grandfather, great-grandfather, and great-uncle had, and he will likely have a better outcome and longer life than I will.

Stasha and I have normalized this condition for our son, and I expect with advances in the treatment of MEN1, Alan will be able to have close to a normal life and lifespan. He has the advantage of knowing what to expect long before symptoms start showing up at around age 30. At least my son will be prepared to cope with the disease. He is already interested in medicine, and before the COVID-19 pandemic, he loved to come to my office when I was working on weekends, showing no fear of illness and, in fact, having a fascination with the body.

Being both a patient and a physician has made me more sensitive to my patients’ needs and has given me greater insight into the difficulties they may be facing, even when they uncomplainingly undergo treatment. Having cancer has taught me to be more cognizant of how a specific therapy might impact patients’ lives. Before I recommend any treatment, I ask myself how tolerable the side effects would be for me or for my loved ones. If the answer is “not very,” I explain to patients that the side effects of a particular drug might not be acceptable to them. I encourage them to let me know if the therapy is impacting their quality of life.

Today, I feel terrific. I love being an oncologist and having patient contact, my professional lifeblood. I am so lucky to have relatively good health, a wonderful family, and to be able to continue my life’s work. I don’t know how long it will last, but I’m relishing every moment.

Cancer in My Community: The Roadblocks to Receiving Cancer Care in...

The RAD51-IF Test Is Feasible for Assessment of the Functional Status...

Cancer in My Community: Advancements in Cancer Care in Singapore

How to Be Brave When Your Parent Has Cancer: A Kid’s...