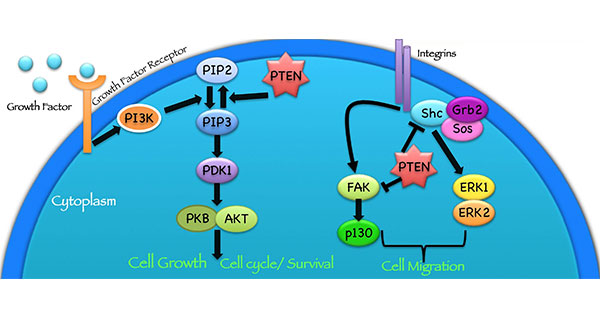 Most targeted therapies for cancer are developed with the aim of turning off a growth-promoting process that has run amok. In particular, many targeted drugs used to treat cancer today block proteins produced by cancer-causing genes, or oncogenes, that encourage cancer cells to grow.

But another class of proteins important to cancer development has proven more difficult to manipulate: tumor-suppressor proteins. As their name suggests, these proteins normally act to stop abnormal cell growth. But they can lose this function in cancer cells. If they could be turned back “on” with drugs, such an approach would represent another front in cancer therapy.

Researchers have now identified, in both human cancer cells and mouse models, a way to turn on one of the tumor-suppressor proteins most commonly silenced in cancer, called PTEN. They also found a natural compound, currently sold as a dietary supplement that, in laboratory studies at least, could flip the on switch.

“This is the first study to identify a pathway that lets us reactivate PTEN pharmacologically,” said Pier Paolo Pandolfi, M.D., Ph.D., of Beth Israel Deaconess Medical Center, whose lab led the research.

“The fact that they found a tactic to reactivate a tumor suppressor has great promise. We’ve had much more success [to date] with attacking oncogenes than re-activating tumor-suppressors,” said Rihab Yassin, Ph.D., chief of the Cancer Cell Biology Branch in NCI’s Division of Cancer Biology.

Many cancer types, including breast and prostate cancer, often lose some of their PTEN function as they grow, Dr. Yassin explained. As a result, proteins that are normally kept in check by PTEN (a signaling pathway) can become overly active and can drive uncontrolled cell growth, she said.

Researchers have identified several cell-signaling pathways that control the behavior of PTEN. But the pathways discovered to date have not shown promise as targets for treatment, Dr. Pandolfi noted.

Looking for a better approach to reactivating PTEN in cancer cells, the study’s lead investigator, Yu-Ru Lee, Ph.D., and his colleagues in the Pandolfi lab embarked on a 5-year search for other proteins that interact with PTEN. They began by sifting through cancer cells looking for proteins that bind physically to PTEN.

The team zeroed in on one such protein, WWP1, which was already known to be produced in abundance in some types of cancer. In a series of experiments, Dr. Lee and his colleagues found that WWP1 keeps molecules of PTEN from joining together in pairs and moving to the surface of cells. PTEN can exert its tumor-suppressive functions only when it is located in the surface area of cells.

Importantly, the team found that WWP1 is controlled by a well-known oncogene called MYC. MYC itself is a key driver of cancer, explained Dr. Yassin, but has proven difficult to target safely.

“Although it’s an oncogene when deregulated, MYC is [also] vital for normal cellular processes. So when you knock it down or out, you affect other critical cell functions that can lead to unwanted side effects,” she said.

To see if WWP1 might be a weak link in this pathway between MYC and PTEN, researchers deleted the gene for WWP1 in mice that are genetically prone to developing prostate tumors.

“The most exciting thing …was that these mice that lacked WWP1 are normal,” Dr. Lee said. “WWP1 looks like a very important oncogene, but there was no toxicity when it’s knocked out,” he added.

The team next looked for compounds that could potentially block WWP1. They used a computer to create 3D models of the structure of WWP1 and then virtually fit other molecules into it, like a key might fit into a lock.

The analysis predicted that a compound called indole-3-carbinol (I3C) can likely bind to WWP1 and prevent it from interacting with PTEN. I3C is found naturally in small amounts in some vegetables, including broccoli and brussels sprouts. It’s also sold over the counter as a dietary supplement.

When the researchers treated human cells containing too much WWP1 with I3C, they saw PTEN start to accumulate at the cells’ surfaces, indicating that WWP1 was being blocked.

They then tested I3C in mice engineered to produce too much MYC. Mice given the compound developed much smaller tumors than those that did not. No side effects were seen with I3C at the doses needed to produce this tumor-suppressive effect.

The researchers would like to see a clinical trial of I3C launched, said Dr. Lee, though they acknowledge that doing so will take time and planning.

“It takes years to translate knowledge from the lab to a human trial,” Dr. Yassin agreed. For example, even with a marketed dietary supplement, the best dose to affect cancer cells while leaving normal cells relatively unharmed still must be determined, she said.

While IC3 was a lucky find and should be tested further, Dr. Lee said, it’s not necessarily the only or the best candidate for WWP1 inhibition. He and his colleagues are currently examining whether other compounds—either existing or yet to be designed and built in the lab—could inhibit WWP1 more effectively.

The Pandolfi lab is additionally looking into whether targeting another protein known to affect PTEN activity, called PI3K, in tandem with shutting down WWP1 could potentially be even more effective.

The team is also digging deeper into WWP1. “We want to learn: What proteins are interacting with WWP1? Which are helping it function? Can those be targeted too? Could this maximize therapeutic potential?” said Dr. Lee.

“We need to work hard at understanding more about WWP1 and its physiological functions” agreed Dr. Pandolfi. “There’s a huge lot to do still.”

Share
Facebook
Twitter
Google+
Pinterest
WhatsApp
Προηγούμενο άρθροGirl Whose Insides Were Sucked From Her Body While Sitting On Pool Suction Defies Medical Odds
Επόμενο άρθροGrandma Saves Her Money To Put Up A Billboard For Everyone To See. Now It’s Going Viral