Progress in Treating GI Cancers Through Molecular Testing: The 2021 Advance of the Year 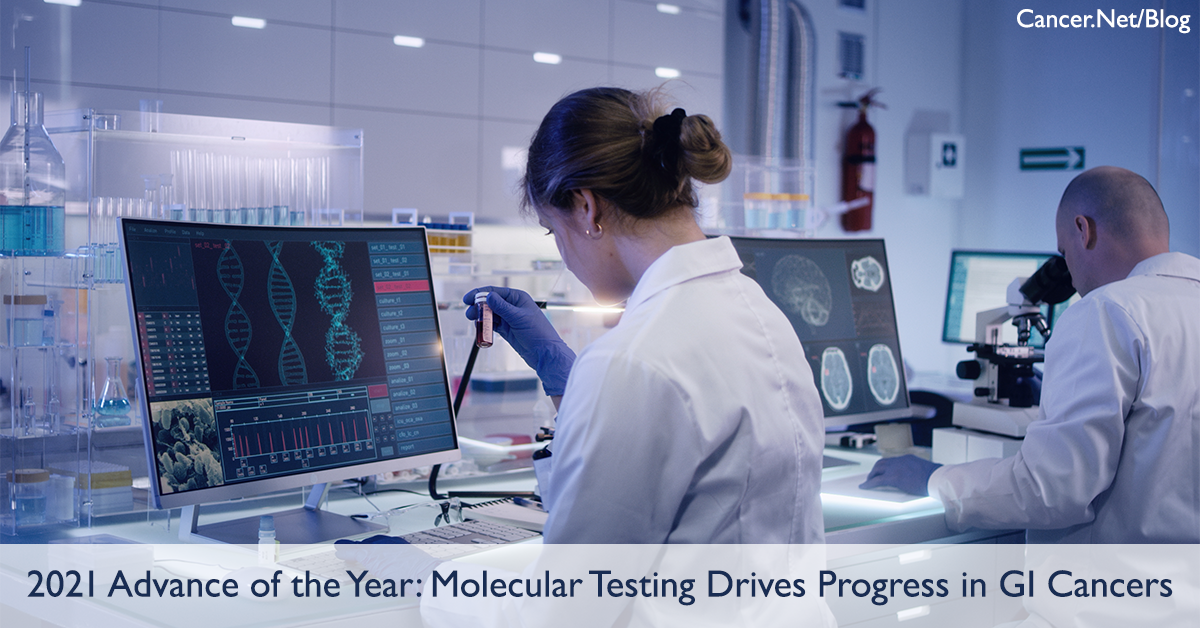 The American Society of Clinical Oncology (ASCO) releases its Clinical Cancer Advances report at the beginning of each year. The report is published in ASCO’s Journal of Clinical Oncology and highlights key advances made in cancer care over the past year. Each report features the Advance of the Year, which is selected by leaders in the oncology field as the area of research that has reached the most progress in the past year.

Molecular testing is a type of testing that identifies the molecular and genetic makeup of a tumor to help better treat the disease. The standard treatments for GI cancers usually include surgery, radiation therapy, and systemic therapy. Systemic therapy is the use of medication to destroy cancer cells. However, these treatments cannot successfully treat all types and stages of GI cancers, so research continues into additional approaches to treatment. Molecular testing has made more treatment options available for people with GI cancers. Specifically, targeted therapies or immunotherapies that match the molecular profile of a specific tumor could be used to treat the cancer. Targeted therapy uses drugs to target specific genes and proteins involved in the growth of cancer cells but limits damage to healthy cells. Immunotherapy is a type of treatment that works by boosting the body’s natural defenses, or immune response, against cancer. It uses substances made either by your body or in a laboratory to improve your immune system’s response to cancer by helping it find and destroy cancer cells more easily.

Some cancers, including some stomach and esophageal cancers, depend on a gene called human epidermal growth factor receptor 2 (HER2) to grow. The HER2 gene makes HER2 proteins, which are found on certain cancer cells and contribute to cancer cell growth. Cancers that have many copies of the HER2 gene or high levels of the HER2 protein are called “HER2-positive.”

The standard first treatment for people with HER2-positive stomach or esophageal cancer is the targeted therapy trastuzumab (Herceptin, Herceptin Hylecta, Herzuma, Ogivri, Ontruzant) given with chemotherapy. Trastuzumab is a type of targeted therapy called a monoclonal antibody that works by targeting HER2 proteins on cancer cells to stop cancer growth. The standard second treatment for people with this type of cancer is the chemotherapy paclitaxel (available as a generic drug) with ramucirumab (Cyramza). Ramucirumab is a type of targeted therapy called an angiogenesis inhibitor, which blocks blood from getting to tumors.

Now, 2 studies have shown promise for a new drug called trastuzumab deruxtecan (Enhertu) in treating people with advanced stomach or esophageal cancer or metastatic colorectal cancer when the first or second treatments do not work. Trastuzumab deruxtecan is a combination of a drug that is similar to trastuzumab, called a biosimilar, linked to a small amount of a strong chemotherapy. The biosimilar finds the HER2-positive cancer cells and then releases the chemotherapy to destroy them. This type of combined treatment is called an antibody-drug conjugate. Trastuzumab deruxtecan is already approved by the U.S. Food and Drug Administration (FDA) for the treatment of HER2-positive metastatic breast cancer.

The first study involving trastuzumab deruxtecan, called DESTINY Gastric-01, was a phase II clinical trial of people with locally advanced or metastatic HER2-positive stomach cancer or esophageal cancer that was not stopped by treatment with trastuzumab. In the study, patients were randomly assigned to groups receiving either trastuzumab deruxtecan (125 patients) or the doctor’s choice of chemotherapy (62 patients).

The second study involving trastuzumab deruxtecan was a phase II clinical trial called DESTINY-CRC01 that included people with HER2-positive metastatic colorectal cancer that had not been stopped by 2 or more treatments. In this clinical trial, the treatment worked in close to half of patients (45.3%). In 1 patient, there were no signs of cancer after the treatment; this is called a complete response. In 23 patients, the cancer shrunk but did not go completely away; this is called a partial response. As in the previous study, the most common side effects were low levels of red and white blood cells, and 5 patients developed lung scarring or inflammation.

By identifying and then targeting HER2-positive cancer cells through the use of molecular testing, researchers are able to find more effective ways of treating people with GI cancers while limiting the side effects. Trastuzumab deruxtecan highlights the strides molecular testing in GI cancers has made over the past year.

There are different types of immunotherapy drugs. Pembrolizumab (Keytruda) is a checkpoint inhibitor that targets PD-1, a receptor on tumor cells, and prevents the tumor cells from hiding from the body’s immune system.

High microsatellite instability (MSI-H) and mismatch repair deficiency (dMMR) are genetic changes that affect the ability of cells to repair damage to their DNA. Because of this inability, MSI-H/dMMR tumors often develop many changes, also called mutations, in their DNA. These mutations create unusual proteins on the tumor cells that make it easier for immune cells to find and attack the tumor. About 5% of people with metastatic colorectal cancer have MSI-H/dMMR tumors.

In a phase III clinical trial, called KEYNOTE-177, researchers found that using pembrolizumab as the first treatment for people with MSI-H/dMMR metastatic colorectal cancer stopped the cancer from growing and spreading for 16.5 months compared with 8.2 months for chemotherapy. Pembrolizumab also caused fewer severe side effects, with 22% of patients who received pembrolizumab experiencing side effects compared with 66% of patients who received chemotherapy.

In June 2020, the FDA approved pembrolizumab as a first treatment for people with unresectable or metastatic MSI-H/dMMR colorectal cancer. Unresectable means surgery is not an option. The results of this study and the following FDA approval show how identifying molecular features can lead to more effective treatments earlier in the treatment plan for people with certain GI cancers.

0
Cancer Research UK’s spin-out, GammaDelta Therapeutics (‘GammaDelta’), has been given approval from the US Food and Drug Administration (FDA) to trial its unique T-cell...
Διαβάστε περισσότερα
World News

0
The ECOG-ACRIN EA1131 study hypothesised that invasive disease-free survival (iDFS) would not be inferior but improved in patients with basal subtype triple-negative breast cancer...
Διαβάστε περισσότερα

0
Cancer Research UK’s spin-out, GammaDelta Therapeutics (‘GammaDelta’), has been given approval from the US Food and Drug Administration (FDA) to trial its unique T-cell...
Διαβάστε περισσότερα

0
The ECOG-ACRIN EA1131 study hypothesised that invasive disease-free survival (iDFS) would not be inferior but improved in patients with basal subtype triple-negative breast cancer...
Διαβάστε περισσότερα

How Does CAR T-Cell Therapy Work in Treating Cancer?

0
Craig A. Portell, MD, is an Associate Professor of Medicine at the University of Virginia and a member of the UVA Cancer Center in...
Διαβάστε περισσότερα