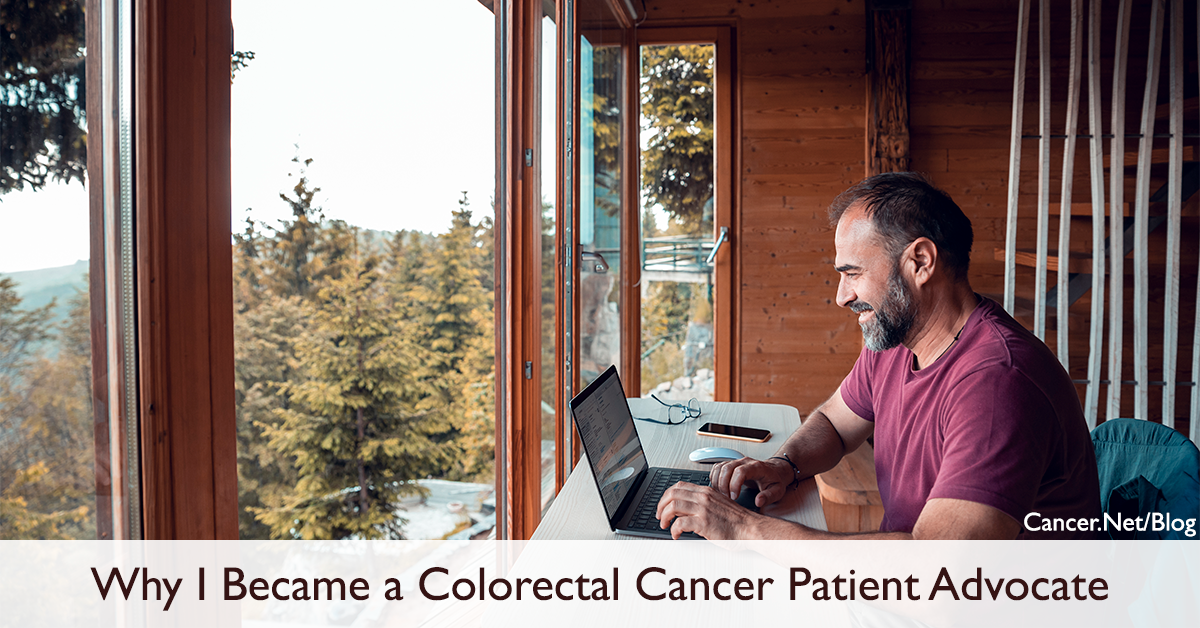 Mr. Wilson is a colorectal cancer survivor and patient advocate who lives in Denver, Colorado.

The first half of 2016 was arguably the most exciting of my life. My wife, Jaione, and I had decided to leave the United Kingdom and move with our 2 children, Andrew, then 14, and Alba, then 10, to Denver, Colorado, where I was taking on a leadership role in corporate affairs for a brewery company. By the beginning of summer, I noticed I was losing a bit of weight and was leaner than usual, but the weight loss wasn’t dramatic enough to be concerning. I assumed it was due to the frenzy of relocating our family to a new country and settling into our new life. But soon after, I started noticing specks of blood in my stool, and that set off an ominous alarm bell in my head.

My mother had been diagnosed with colorectal cancer when she was 56 and died 3 years later. I was now 48. I had been screened for colorectal cancer at age 46 via a guaiac-based fecal occult blood test. In England, to qualify for a colonoscopy, even if you are at high risk for colon cancer, you have to be 55 or older or have 2 first-degree relatives who died of the disease. The blood test was found to be negative for colon cancer. I’m now convinced the test was inaccurate.

The blood in my stool immediately sent me to a primary care physician. Before I could even meet with him, after taking my medical history and noting my current symptoms, the nurse practitioner sent me for an appointment with a gastroenterologist and a colonoscopy. After that, everything changed.

I awoke from the anesthesia to the fearsome words, “We have found a mass, and you will require surgery.” I felt like the blood was draining from my body and remember thinking, “This is cancer, and I could die.” A computed tomography (CT) scan of my body found more bad news. I had multiple tumors and lesions in my liver. The diagnosis was stage IV colorectal cancer, and at that moment, life just stopped.

The oncologist I met with suggested I have surgery to remove the mass in my colon, followed by an aggressive chemotherapy regimen of fluorouracil, leucovorin, and oxaliplatin (FOLFOX) to eliminate the tumors in my liver. And because the metastatic cancer is RAS wild-type, the monoclonal antibody panitumumab (Vectibix) was added to the mix.

The very next event changed my life.

My boss offered to call his friend who worked at the Translational Genomics Research Institute in Phoenix, Arizona, to ask his advice. A few hours later, I received a call from him. He started the conversation by saying that although he couldn’t offer me a groundbreaking treatment that would cure my cancer, he had faith in the standard of care I would be receiving and believed the therapy would be successful in putting me in remission. But his next words seared in my memory and have become the encouraging words I now use in my patient advocacy: “If the treatment doesn’t work, we will be here for you.” Those words gave me the hope I needed to move forward and have propelled me to become a patient advocate.

He was right. The initial treatment was successful in eliminating the cancer in my liver, and maintenance therapy with panitumumab has kept the cancer from returning. Although I haven’t been declared cured of colorectal cancer, there is no evidence of the disease in my body. I don’t know how long I’ll have to be on maintenance panitumumab, but perhaps it will be for the rest of my life. I once asked a physician about the timeframe for continuing maintenance therapy, and she said, “You never want to turn your back on metastatic cancer.” Her words have stuck with me.

When I got the diagnosis, my oncologist didn’t offer a prognosis, and I didn’t ask for one. The only question I asked was, “Can this cancer be treated?” Once he said, “Yes,” I didn’t focus on the outcome, but rather on the results from each new imaging scan, which subsequently got better as the treatment worked its magic. Each scan showed a reduction in the tumors in my liver and no other signs of metastases, and Jaione and I held onto that improvement in my health and tried not to think too far ahead.

When you don’t know whether the rest of your life will be measured in months, years, or decades, you become more focused on the here and now and what is important in your life. I knew I wanted to give back to the oncology community that had given so much to me. I wrote a book that chronicles the story of my cancer recovery through the focus of my wildlife photography lens, and donated all the proceeds to the Colorectal Cancer Alliance. I also became a patient advocate and have joined the Colorado Cancer Coalition to help accelerate a bill through the Colorado state legislature that would lower the age guideline for insurance coverage for screening colonoscopies from 50 to 45.

My experience with cancer also has led me to look for ways to raise awareness of colorectal cancer, especially in younger adults. I completed a short-term assignment with Fight Colorectal Cancer and served on the national board of the Colorectal Cancer Alliance helping to raise much-needed funding for research, and the work has been very rewarding.

I know my diagnosis of colorectal cancer at a young age puts my children at higher risk for developing the disease. I want to do everything I can to change the potential trajectory of our family history so they never have to hear the words, “You have colorectal cancer.”

I am incredibly fortunate. I’ve been the beneficiary of research advances that have allowed me to surpass the survival odds and of an oncology team that treated me as a partner in all treatment decision-making and never allowed me to give up hope. Because of their efforts, I’ve turned my pain into a new life purpose, and I’m committed to ensuring that every person with colorectal cancer has those same advantages, so they, too, have a chance at living fulfilling lives after cancer.

Addition of an EGFR Antibody to Fluorouracil/Folinic Acid Maintenance Therapy in...

What Is Peripheral Neuropathy and How Can It Be Prevented or...

Why it’s difficult to estimate the number of extra cancer deaths...