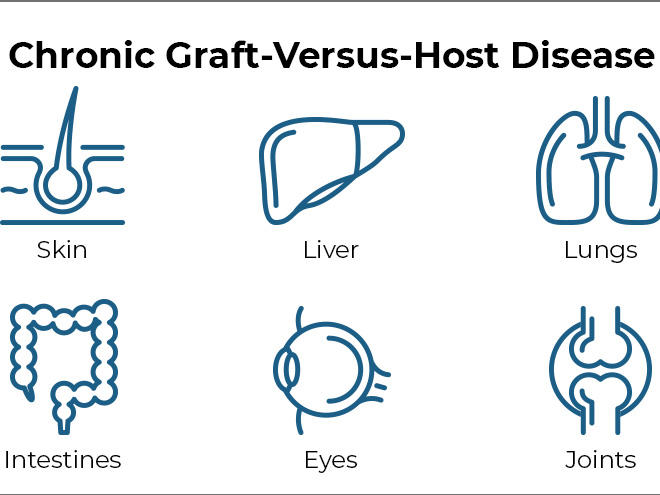 People with chronic graft-versus-host disease (GVHD), a common complication of bone marrow and stem cell transplants, now have a new treatment option. On July 16, the Food and Drug Administration (FDA) approved belumosudil (Rezurock) for people 12 years and older who have already tried at least two other therapies for the disease.

The approval is based partially on findings from a phase 2 clinical trial of 65 people with chronic GVHD, who were in remission from cancer after treatment with a bone marrow or stem cell transplant. Three-quarters of those patients responded to belumosudil, meaning their GVHD symptoms improved.

Although the standard treatment for chronic GVHD—high doses of a steroid such as prednisone—works for about half of patients, it causes many toxic side effects that limit its long-term use. And although there are more than 30 other treatment options, only one is FDA approved for chronic GVHD and there’s no way to know which one will work best for an individual.

“Throughout most of transplant history, we have been taking drugs that were developed for other [purposes], putting them into [patients with chronic GVHD], and seeing if they work,” said study investigator Stephanie Lee, M.D., M.P.H., of Fred Hutchinson Cancer Research Center.

“This is the first time in history that [a drug] was developed, from animal experiments to clinical application, as a therapy for chronic GVHD,” added study investigator Steven Pavletic, M.D., of the Immune Deficiency Cellular Therapy Program in NCI’s Center for Cancer Research.

GVHD occurs when transplanted immune cells (the graft) attack the recipient’s body (the host). The disease can affect nearly every organ and can cause many painful and debilitating symptoms.

GVHD is a concern for people with blood cancer because bone marrow and stem cell transplantation are part of the standard treatments for blood cancers.

“As techniques [for stem cell transplants] became safer and patients started living longer, this late effect became a big issue,” Dr. Pavletic explained. “These patients are cured from cancer, and now they are suffering from a new autoimmune disease that affects [them from] head to toe.”

The disease can develop quickly (acute GVHD) or slowly (chronic GVHD). Chronic GVHD usually develops within 12 months after the transplant and can take 3 to 5 years to resolve, if at all. Around 5,000 people in the United States develop chronic GVHD every year.

The clinical trial that led to the FDA approval included 65 participants who took belumosudil as a pill once per day. The drug works by turning down the activity of immune cells and preventing the buildup of scar tissue—another hallmark of GVHD. The study was supported by Kadmon Pharmaceuticals, the company that makes belumosudil.

At the start of the study, 46 participants (71%) had chronic GVHD that was considered severe. Most participants had previously received three or more treatments for the disease.

The research team assessed each patient’s symptoms over time using guidelines established by Dr. Pavletic and others in 2014. Symptoms are evaluated in eight organs that are most commonly affected by chronic GVHD, namely the eyes, mouth, skin, joints, liver, gut, lungs, and connective tissue (fascia).

For 4 people (6%), belumosudil completely resolved disease symptoms in all eight organs. For 45 others (69%), the treatment partially improved symptoms, meaning there was a meaningful improvement in at least one organ and no worsening of symptoms in other organs.

Those improvements lasted for a median of 50 weeks, and fewer than half of those who responded to belumosudil needed additional treatments. In addition, 20% of participants stopped taking steroids for chronic GVHD and 65% were able to take smaller doses.

Across the board, the researchers saw improvements in every organ that they evaluated, including difficult-to-treat organs such as the lungs and skin. The disease can cause irreversible changes in some organs, so it’s challenging to resolve symptoms in those organs, the researchers explained in a study report published July 15 in Blood.

In an earlier study of belumosudil, Dr. Lee and her colleagues also found that half of the study participants experienced an improvement in quality of life. “For a chronic disease like this, [quality of life] is big. Patients [with chronic GVHD] are suffering from [it] every day,” Dr. Lee said.

Another benefit of belumosudil, Dr. Lee said, is that it seems to be safe to take with most other drugs. That’s “helpful because our patients are on a lot of different kinds of medications, and sometimes those [drug] interactions prevent us from using other medicines” to treat chronic GVHD, she said.

The most common side effects seen in the two clinical trials of belumosudil were infections, lack of energy, nausea, and diarrhea. Some participants stopped the treatment, either temporarily (29%) or permanently (18%), due to side effects. One person died from organ failure and infection, but it was unclear whether this was related to treatment.

The Impact of GVHD Consensus Guidelines

Nearly 2 decades ago, “the bone marrow transplant community realized something should be done [to address] this disease, but there were no tools or rules for how to [study] it,” Dr. Pavletic said.

So, in 2003, NIH put together a multidisciplinary team and developed a comprehensive research program focused on chronic GVHD. This team, led by Dr. Pavletic and collaborating with other scientists around the world, created guidelines and tools to diagnose, stage, and study chronic GVHD in preclinical and clinical studies.

For the first time, researchers could measure chronic GVHD symptoms in a patient and tell if they were getting better or worse, Dr. Lee said. “That laid the groundwork so that, as new [drugs] came along, we had a framework and an infrastructure to test them.” All of that work “really [got] us to this point” of the new FDA approval, she added.

While the approval of belumosudil is a major step forward, Dr. Pavletic said, more research is needed because most patients in the trial only experienced a partial improvement. “It tells us how much more work we have to do to [develop] even better drugs, or combine drugs, or give them at an earlier stage,” he said.

The addition of a new treatment option for chronic GVHD also makes the management of patients more complex because there are so many choices, Dr. Lee said. It’s currently difficult for a doctor to know which of the more than 30 available treatments will be best for their patient.

“Trying to match the right treatment to each patient is more complicated [now]. It’s a good problem to have, but we have to understand it better,” she said.

In addition to studying treatments for chronic GVHD, Drs. Pavletic and Lee are also searching for ways to prevent the disease from developing or getting too severe. Dr. Pavletic’s group is developing approaches to predict which patients will go on to develop chronic GVHD, so that they have the option to take medicines to help prevent the disease. Because these prevention treatments come with the risk of serious side effects, it would be helpful if they could be given only to patients who really need them, Dr. Pavletic explained.

Dr. Lee’s group, meanwhile, is working to find early signs of GVHD so that patients can receive treatment before the disease worsens. If there are effective drugs that are also non-toxic and easy for patients to take, then “we can prevent people from having permanent disability and damage to their organs,” she said.

Research with Integrity – the madness of short methods

First-of-its-kind app for patients on clinical trials being piloted by Cancer...

Study Suggests that Cancer Patients Who Eat Peanuts Frequently May Be...