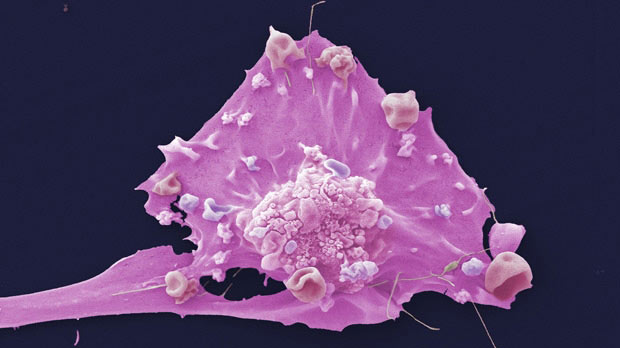 The National Institute for Health and Care Excellence (NICE) has recommended the use of the immunotherapy drug pembrolizumab (Keytruda) as an option for some people with early triple negative breast cancer (TNBC) in England and Wales.

The NHS has also negotiated a new discount on the drug from its manufacturer, MSD.

According to NICE estimates, this new guidance means that, in England alone, approximately 1,600 more people affected by this aggressive form of the disease should now be eligible for immunotherapy every year.

Pembrolizumab was previously available for a small group of people with advanced TNBC that had spread or couldn’t be surgically removed.

NICE has now recommended that the drug should also be made available for people affected by early TNBC at high risk of recurrence or locally advanced TNBC that hasn’t spread elsewhere in the body. It will be given with chemotherapy as a way of reducing the size of a tumour before surgery and on its own as a post-surgery treatment.

It will give hope to those who are diagnosed, and prevent the cancer from progressing, allowing people to live normal, healthy, lives.

Clinical trials have shown that this combined approach can reduce the chance of TNBC growing or progressing by 37% compared to chemotherapy alone.

It also increases the likelihood that a cancer will completely respond to treatment, lowering the risk of it returning in future, and lessens the need for mastectomies, surgeries that fully remove people’s breasts.

“This is good news for people affected by early triple negative breast cancer,” said Michelle Mitchell, Cancer Research UK’s chief executive. “This type of breast cancer has a high risk of recurring after treatment, which can cause real anxiety for patients.

“Clinical trial evidence has shown that pembrolizumab with chemotherapy before surgery – and pembrolizumab on its own after surgery – can not only extend the time before the cancer comes back, but also increase the chance that the cancer disappears.”

What is triple negative breast cancer?

TNBC is a less common form of breast cancer. Around 8,000 people in the UK are diagnosed with it every year. It only makes up around 15% of breast cancer cases, although it disproportionately affects women under 40 and those from Black backgrounds.

Unlike most other breast cancers, TNBC cells don’t have receptors for either of the two main female sex hormones (oestrogen and progesterone) or a protein called HER2.

That means TNBC doesn’t respond to the hormone treatments and targeted drugs that are part of the standard of care for most other breast cancers.

Moreover, TNBC is often more aggressive than other types of breast cancer. It’s also more likely to return after treatment.

As a result, despite its relative rarity, TNBC causes around 25% of breast cancer deaths.

There have been limited improvements to treatment options for early and locally advanced TNBC in recent years. Before this recommendation, people affected by it usually had chemotherapy and then surgery.

The NICE committee concluded that, given the pressing need for treatments, adding pembrolizumab before and after surgery would be welcomed as a potential “lifeline” for people affected by the disease.

The benefits of pembrolizumab

Pembrolizumab helps immune cells like this one attack cancer. fusebulb/Shutterstock.com

The decision was made based on interim results from the KEYNOTE-522 trial, which is scheduled to finish in 2025. When it was evaluated by NICE, the study showed that combining pembrolizumab with chemotherapy made it more likely that early-stage TNBC would completely respond to treatment.

In this study, people were said to have experienced a ‘complete response’ if treatment removed all signs of cancer from their breast tissue and surrounding lymph nodes. This is an important measure for TNBC because it lowers the need for invasive surgery and often leads to better long-term outcomes.

The trial also showed that adding pembrolizumab to chemotherapy before surgery, then continuing with pembrolizumab alone after surgery increases the time before TNBC recurs or progresses.

Together, these findings suggest that, over a longer period of time, adding pembrolizumab to standard care would also make a difference to how long people live after receiving treatment.

Although adding pembrolizumab to chemotherapy also increases the risk of serious side-effects, NICE concluded that this is outweighed by the drug’s benefits. As a patient expert told the committee, that’s especially important because TNBC is associated with younger people, who may have young families.

“This is a hugely significant moment for women,” said Amanda Pritchard, the chief executive of the NHS. “The NHS has struck a new deal to roll out a potentially life-saving drug for patients suffering with the most aggressive form of breast cancer that has been traditionally very difficult to treat.

“It will give hope to those who are diagnosed, and prevent the cancer from progressing, allowing people to live normal, healthy, lives.”

How does pembrolizumab work?

Pembrolizumab is a type of immunotherapy called a checkpoint inhibitor. It’s given by a drip into a vein and works by blocking a specific protein on immune cells that can stop them from attacking cancers.

In that case, atezolizumab (Tecentriq) was recommended with chemotherapy as a first treatment for people whose cancer has spread or returned and can’t be surgically removed. At the time, that group included around 600 people.

Then, in June this year, NICE recommended pembrolizumab for a smaller group of people in the same position who aren’t eligible for treatment involving atezolizumab.

The main difference between pembrolizumab and atezolizumab is in the way they activate the immune system. Atezolizumab blocks a protein that cancer cells use to disarm immune cells. Pembrolizumab, meanwhile, stops immune cells from being disarmed.

The latest guidance for pembrolizumab makes immune checkpoint therapy available for a much larger group of people with earlier stage TNBC across England and Wales. NICE decisions are also usually adopted in Northern Ireland.

Associations Between Genomic Features and Response to Neoadjuvant Treatment in a...

What People With Breast Cancer and Survivors Should Know About Exercising...