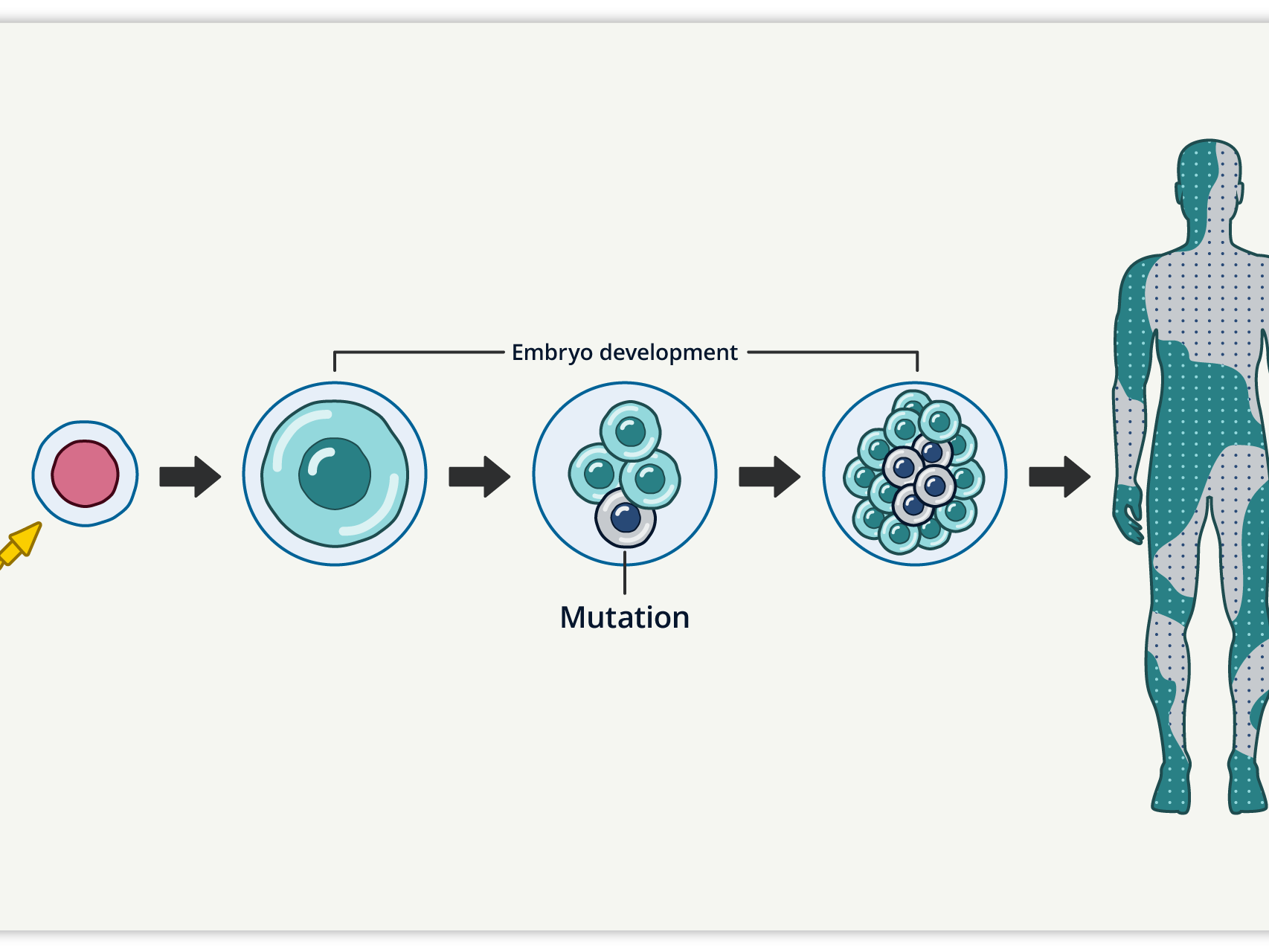 Scientists may have pegged a somewhat surprising cause of cancer for some people, according to a new study. The culprit is mutations in genes known to be related to cancer (cancer susceptibility genes). But the unexpected part of their finding was when the mutations occurred: in the womb, during the earliest days of embryo growth.

Because each embryo cell grows to form a portion of the body’s organs and tissues, mutations that occur in the womb wind up in a mosaic, or patchwork, pattern in the person’s body. As such, mutations that pop up during embryo development are aptly called “mosaic mutations.”

Mutations in cancer susceptibility genes, which are known to increase cancer risk, are typically thought to be inherited, meaning passed from parent to child. But the new study highlights that these mutations can also occur after conception, as a result of spontaneous errors that happen as cells divide.

But “we had no idea what the extent of this phenomenon was in cancer patients we’re seeing every day,” Dr. Mandelker said.

“What we found here is that mosaicism affecting cancer susceptibility genes is much more widespread than we previously anticipated,” said Senior Scientist Jorge Reis-Filho, M.D., Ph.D., also of MSKCC.

Looking through the genetic test results of more than 35,000 people with cancer treated at MSKCC, the team found 36 patients with mosaic mutations in cancer susceptibility genes. The study was published April 1 in Cancer Discovery.

Finding out whether someone has a mosaic mutation in a cancer susceptibility gene is important for their cancer care, noted the study’s lead scientist, Fresia Pareja, M.D., Ph.D., of MSKCC. It can help determine the most appropriate cancer treatment and might also indicate the need to monitor for the growth of additional cancers.

The research team will continue to check for mosaic mutations in every patient who is treated at MSKCC, Dr. Mandelker noted, and they hope other cancer centers will follow suit.

Cancer starts with a cell that has a harmful mutation in a gene that controls how cells grow and divide. When that mutation arises, however, can vary.

For most people with cancer, the mutation occurred later in life, sometimes years or decades after birth. Those mutations, known as somatic mutations, are found in the tumor but not in other cells in the body.

For a smaller group of people with cancer, the mutated gene was inherited from a parent at conception. Inherited, or germline, mutations are present in every cell in the body as well as in the tumor.

Previous studies have hinted that cancer-related mutations can also occur after conception, early in embryo development. Because each embryo cell goes on to form a specific set of organs and tissues—muscles and bones, for example—these mosaic mutations are present in some cells in the body as well as in the tumor.

Before this study, “I don’t think there was much consideration of this early embryonic mosaicism” among cancer researchers and doctors, said Ian Fingerman, Ph.D., of NCI’s Division of Cancer Biology, who wasn’t involved in the work.

“The general school of thought was you either have germline mutations or somatic mutations,” Dr. Fingerman said. But this new study, partially funded by NIH, could change that view if the findings are confirmed in other studies, he said.

The contribution of mosaic mutations to cancer hadn’t been given much thought because they’re typically overlooked, Dr. Mandelker noted, due to technical limitations of conventional genetic tests.

“But with the [approach] we employed, we were able to detect these mosaic mutations that were missed before,” Dr. Pareja said.

For the study, the scientists tapped into data from MSK-IMPACT, a genetic test that scans more than 500 cancer-related genes (including 61 cancer susceptibility genes) for harmful mutations. Every patient at MSKCC gets the test to identify potential treatments that might help them or clinical trials they might be able to join.

“The breakthrough here with MSK-IMPACT is we are doing paired samples, so we have the blood and the tumor [tested] alongside each other,” Dr. Mandelker noted. That allows them to find mosaic mutations present in both blood and tumor cells, she explained.

The research team scoured the test results of more than 35,000 patients, both children and adults, for mosaic mutations in cancer susceptibility genes. They identified 36 patients with mutations that fit their criteria for mosaicism—those that were present in a fraction of blood cells and in a higher fraction in tumor cells.

Based on their finding that 36 of 35,000 total patients had mosaic mutations, the researchers estimated the frequency of mosaic mutations to be around 1 in 1,000. But the true number is likely to be higher than that, Dr. Reis-Filho noted.

And there may be other cancer-related genes that are affected by mosaic mutations, in addition to the 61 cancer susceptibility genes the researchers focused on.

“So, we might be seeing the tip of the iceberg,” she said.

Families with germline mutations in cancer susceptibility genes tend to share certain patterns of cancer. For example, family members may develop cancer at an unusually young age for that type of cancer or develop more than one type of cancer.

People with mosaic mutations in cancer susceptibility genes had patterns of cancer that were similar to people with germline mutations, the researchers found. Many were diagnosed with cancer at a younger age, and some had more than one kind of cancer.

These findings suggest that, even if someone doesn’t have a germline mutation or have a family history of cancer, “having a mutation occur very early in embryonic development [can] still predispose you to those same types of cancers” as someone who does, Dr. Fingerman noted.

The MSKCC team’s “approach for identifying mosaic cancer-predisposing alleles could provide substantial benefit to screening practices and suggests that many individuals who have cancer-predisposing mosaicism may often be overlooked,” wrote L. Alexander Liggett, Ph.D., and Vijay Sankaran, M.D., Ph.D., in an accompanying commentary.

If you have cancer, finding out that you have a mosaic mutation in a cancer susceptibility gene is important for three reasons, the researchers explained.

For example, people with mosaic mutations in the MSH2 or MSH6 genes can be treated with the drug pembrolizumab (Keytruda).

Second, having a mosaic mutation in certain genes might put you at risk for other cancers, signaling the need to monitor you for the growth of additional cancers (what’s known as surveillance).

Study participants who were found to have a TP53 mosaic mutation were put on MSKCC’s cancer screening protocol for people with a germline TP53 mutation, Dr. Mandelker noted. Germline mutations in TP53 cause Li-Fraumeni syndrome, a disorder that predisposes people to multiple cancers, including bone, brain, and breast cancer.

And third, mosaic mutations can be passed down to your children if the mutation is present in your egg or sperm cells, which can happen depending on when in development the mutation arose and in which cell. “So, it’s very important for reproductive counseling as well,” and for genetic testing of existing children, Dr. Mandelker said.

Overall, the study findings have brought about “a fundamental shift in the way we approach [mosaic mutations]. Rather than being incidental findings of academic curiosity, they have become important for treatment decision-making,” Dr. Reis-Filho said.

Zooming in: Fine-tuning the picture to diagnose oesophageal cancer earlier