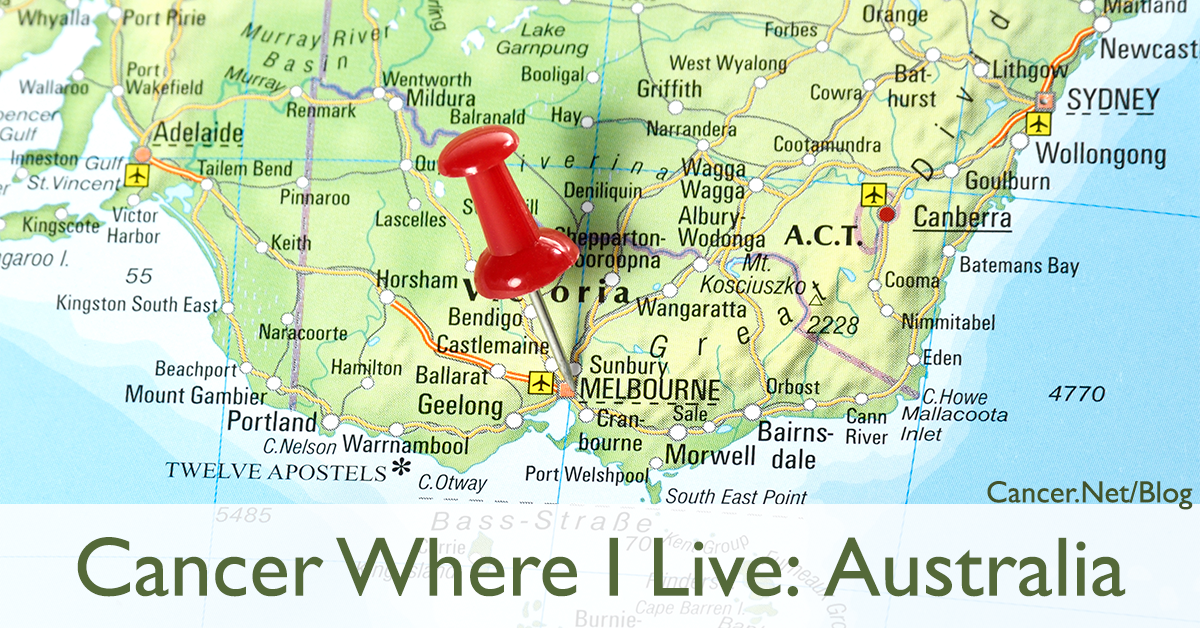 Cancer in My Community is a Cancer.Net Blog series that shows the global impact of cancer and how people work to care for those with cancer in their region. Michael Jefford, MBBS, MPH, PhD, GAICD, FRACP, is a medical oncologist at the Peter MacCallum Cancer Centre (Peter Mac) in Melbourne, Victoria, Australia. He is also the director of the Australian Cancer Survivorship Centre based at Peter Mac and a full professor at the University of Melbourne. He is currently the Chair-Elect of the American Society of Clinical Oncology (ASCO) Cancer Survivorship Committee. You can follow him on Twitter.

Why I care for people with cancer

As a medical student and as a junior doctor, my interests were in specialties that had a large component of patient interaction rather than being a proceduralist. I really enjoyed my first oncology rotation, particularly the interactions I had with people affected by cancer. Patient interactions, the breadth of oncology practice, developments in treatment and science, and professionals within the specialty drew me to medical oncology as a career.

For people directly affected by cancer, and for their family and friends, a cancer diagnosis is scary. Hopefully oncology professionals can make it less scary and provide a path through the fears and the unknowns people with cancer face. I believe that I can do this well, and I gain professional reward from knowing that I can help people. I have a responsibility to provide up-to-date, evidence-based advice as well as compassionate care. I hope that I deliver this consistently.

My role is roughly half clinical, or patient facing. The remainder of my role focuses on efforts to improve care, experiences, and outcomes for cancer survivors, with a particular emphasis on the phase after treatment. I lead the Australian Cancer Survivorship Centre (ACSC), which is based at Peter Mac. Everything we do at ACSC has a link to our goal of optimizing the health and well-being of survivors and caregivers.

Cancer is common in Australia. Excluding non-melanoma skin cancers, the most common cancers are prostate cancer, breast cancer, colorectal cancer, melanoma, and lung cancer. These 5 cancers account for about 60% of all cancers diagnosed in Australia. Survival rates are very good; they are among the highest in the world. Five-year survival rates have improved from about 5 in 10 people surviving cancer from 1987 to 1991 to nearly 7 in 10 people surviving cancer from 2012 to 2016. Even though survival rates have been improving, cancer still accounts for around 3 out of every 10 deaths in Australia.

While cancer survival rates have improved overall, people diagnosed with cancers such as pancreatic cancer, lung cancer, and mesothelioma have a less than 1 in 5 chance, on average, of surviving at least 5 years after being diagnosed. Aboriginal and Torres Strait Islander people, as well as people in lower socioeconomic groups, have lower survival rates compared with other Australians.

All Australians have access to free health care. Almost all drugs, including expensive anti-cancer therapies, are funded by the government through the Pharmaceutical Benefits Scheme (PBS). Health care is funded through income tax, with around 2% of income paid to Medicare. Australia also has a parallel private health care system. Australians are incentivized to have private insurance, paying additional tax if they don’t have private coverage. A significant amount of cancer care is in the private system.

In terms of risk factors for cancer, around two-thirds of all Australians are overweight or obese. Smoking rates are falling, with the prevalence of daily smoking in Australian adults about 13.8%. A slightly higher percentage consume alcohol at harmful levels. Australians also enjoy the sun. Unhealthy sun behaviors contribute to the high incidence of skin cancers and deaths, particularly from melanoma.

While we have 3 free national screening programs, the number of people using these programs is lower than desired, which means there are significant preventable cancer cases and cancer deaths in our country. Challenges with early detection and prompt diagnosis contribute to some people being diagnosed with cancer at a later, potentially less curable stage.

Access to comprehensive care can also be difficult for people in Australia, especially for those living in rural and remote areas. Radiation therapy services, for example, have tended to be concentrated in large centers. Clinical trials may not be available at all sites, and there can be delays between when treatments are proven to be effective in clinical trials and when they are readily available and funded through the PBS. There are significant gaps in the supportive care, or palliative care, services in Australia, including psychosocial care. There is also uneven access to hospice and to community-based palliative care services.

Even though treatments are provided at no charge through the health care system, people frequently report significant financial toxicity. We believe that there are many opportunities to improve the model of care after active treatment ends for people with cancer in Australia. This could lead to improved care and outcomes for survivors and help lessen the number of people treated in hospitals.

While Australians enjoy excellent survival outcomes, we have little data about the quality of their lives, and there is very limited public reporting. Investment in cancer research is modest compared with some countries, and some would argue that Australia does not have an effective path to convert laboratory discoveries into useful drugs for patients.

Community-based organizations play a critical role in supporting people affected by cancer in Australia. Cancer Council Australia is a federation of cancer charities operating in each state and territory of Australia. There are many organizations representing, supporting, and advocating for people affected by particular cancers (e.g., Breast Cancer Network Australia, Leukaemia Foundation, Prostate Cancer Foundation of Australia), or for people with cancer at different life stages (e.g., CanTeen, Redkite).

Peter Mac provides a listing of community support organizations for people with cancer. The ACSC, based at Peter Mac, has 3 broad areas of focus: providing information and support for survivors; education and training for health care professionals; and leadership and guidance around survivorship care (with an emphasis on the post-treatment phase).

What Is Mindfulness and How Can It Help People With Cancer?

Science Surgery: ‘Can cancers develop in the heart?’

What Hodgkin Lymphoma Survivors Should Know About Mantle Radiation and Breast...

A Penny for Your Thoughts