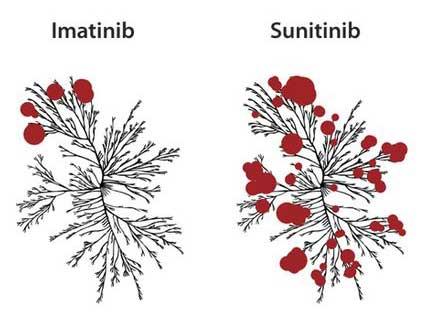 People with gastrointestinal stromal tumors (GIST) driven by a specific gene alteration have a new targeted drug option for treatment.

On January 9, the Food and Drug Administration (FDA) approved avapritinib (Ayvakit) for some adults with GIST whose tumors have an alteration in a portion of the PDGFRA gene called exon 18. The most common of these alterations is called a D842V mutation. The approval only applies to those whose tumors cannot be removed with surgery or have spread elsewhere in the body.

Most people with GIST can be effectively treated for some time with a targeted drug called imatinib (Gleevec), although their tumors typically develop resistance to the drug within several years. People with GIST whose disease has progressed during treatment with imatinib may still benefit from similar drugs, including sunitinib (Sutent).

However, none of the drugs previously approved to treat GIST are effective in PDGFRA exon 18 mutation-positive GIST. In contrast, in the small clinical trial that led to avapritinib’s approval, 84% of participants’ tumors with this mutation shrank or disappeared entirely. Another 12% had their tumors stop growing.

And these tumor responses were long-lasting. One year after starting treatment, 74% of tumors that had responded to avapritinib still had not started to grow again (progressed), and 90% of trial participants were alive a year after joining the trial.

For patients whose tumors have PDGFRA exon 18 mutations, “this approval changes the landscape completely … from ‘we have no hope that anything will work’ to something that we expect to work in almost everybody,” said Michael Heinrich, M.D., of Oregon Health & Science University, an investigator on the study.

The approval also highlights an overall trend in cancer research, with drugs being designed for small, genetically defined populations of patients, said John Glod, M.D., of NCI’s Center for Cancer Research, who was not involved with the trial.

“I think that’s where we are in oncology,” said Dr. Glod, who specializes in the treatment of sarcomas, including GIST. “We’re breaking these diseases up into smaller and smaller patient groups, and these new drugs can work quite well for those patients.”

A Lock Without a Key

In people with GIST, tumors are most commonly found in the stomach and small intestine, but they may be found anywhere in or near the gastrointestinal tract. In some people, GIST can be treated with surgery alone. But when a tumor can’t be removed entirely with surgery or has spread to other parts of the body (metastasized), targeted therapies are a standard treatment.

Up to 85% of GIST tumors contain mutations in one of two genes, PDGFRA and KIT. These mutations lead to the production of aberrant KIT and PDGFRA proteins that drive the cancer, explained Dr. Heinrich. These two proteins can usually be shut down by imatinib and similar drugs, called tyrosine kinase inhibitors, that block the protein’s activity.

“The [mutant] protein acts like the powerhouse, or engine, of the cancer. When we’re able to turn those proteins off, that turns off the engine, and the cancer cells die or stop growing,” Dr. Heinrich said.

Other tyrosine kinase inhibitors used to treat GIST bind tightly to parts of the KIT or PDGFRA proteins that normally control cells’ energy intake. But a PDGFRA exon 18 mutation changes the shape of PDGFRA proteins in a way that prevents the drugs from binding to them, added Dr. Heinrich. “A PDGFR [exon 18] mutation [creates] a lock that none of our previous keys fit into,” he explained.

Avapritinib was chosen for development specifically based on its ability to bind to PDGFRA and KIT proteins. In laboratory studies, the drug could bind to all tested mutant PDGFRA proteins and inhibit their activity in cancer cells.

An early-stage trial called NAVIGATOR, which was funded by Blueprint Medicines, avapritinib’s manufacturer, included 43 people with PDGFRA exon 18 mutation-positive GIST, all but one of whom had metastatic disease.

Of these 43 participants, 34 (79%) had their tumors shrink (a partial response) and 3 (7%) experienced a complete response to treatment, meaning the tumors disappeared entirely, according to data presented at the 2019 annual meeting of the Connective Tissue Oncology Society. Another 5 (12%) had their tumors stop growing (stable disease). Only one trial participant had no response to treatment.

Most of the participants had previously received imatinib or another tyrosine kinase inhibitor. Two of the five participants who had been treated with avapritinib alone had a complete response.

The FDA approval includes the use of avapritinib as an initial, or first-line therapy. “I think the anticipation is that we wouldn’t try other things that have no chance of working, instead we would just try this,” said Dr. Heinrich.

More serious but less common side effects included bleeding from blood vessels in the brain, and cognitive impairment, such as memory problems and confusion. Cognitive effects “are an unusual side effect for a kinase inhibitor,” said Dr. Heinrich, “so it’s important for oncologists to be aware of it and monitor patients closely. In most patients, these symptoms can be managed with changes in dose or brief drug-free intervals.”

A larger, randomized clinical trial, called VOYAGER, is comparing avapritinib with regorafenib (Stivarga) in people whose GIST tumors have any KIT or PDGFRA mutation, and have progressed after treatment with at least two other tyrosine kinase inhibitors.

“This [drug] could make a big impact in adult GIST,” said Dr. Glod. Unfortunately, he added, it’s not likely to be tested in pediatric GIST, as those tumors are usually driven by mutations in another family of genes called SDH.

For adults with GIST, this approval will likely increase the number of patients who undergo molecular testing of their tumors, explained Dr. Heinrich. “There are other reasons we should be doing that, but … we don’t want to miss the patients with exon 18 mutations for sure now,” he said.

As part of the approval process for avapritinib, Blueprint Medicines embarked on a unique collaboration with a GIST advocacy and support group called the Life Raft Group.

For about 20 years, the group has run a patient registry to capture the experience of living with GIST and its treatment. To date, more than 2,000 people with GIST have shared their information—and, in some cases, tissue samples.

“It’s all patient-reported data. The information comes directly from patients or caregivers,” explained Sara Rothschild, a patient advocate with the Life Raft Group.

In 2016, Blueprint Medicines approached the group about using their database to understand how patients with GIST describe their experience living with the cancer and to learn how common mutation testing is in GIST nationwide.

“They wanted to understand the burden of disease, the burden of treatment, the benefits and risks in the management of the disease,” said Rothchild. As part of the 21st Century Cures Act, FDA is now encouraging pharmaceutical companies to include this type of patient-reported perspective in their drug approval applications, she explained.

The database is now “capturing information from patients on avapritinib and what they’re doing to handle some of the side effects,” Rothchild said. That information is being used by the Life Raft Group to create a webinar that will help patients talk with their doctors about their care.

How My Advanced Colorectal Cancer Diagnosis Led Me to Patient Advocacy

Lighting Ceremony at Lincoln Memorial Honors the 400,000 Lives Lost to...

Husband Turns Wife’s Inspiring Poem for Her Daughters into a Book...

A coming together of minds for early detection