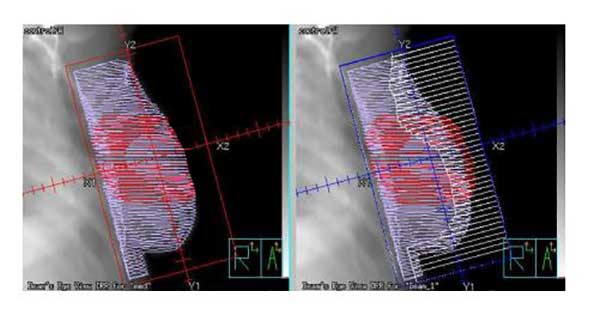 New results from two clinical trials suggest that either of two types of radiation therapy after breast-conserving surgery for women with early-stage breast cancer can reduce the risk of the cancer returning.

In the randomized clinical trials, both whole-breast irradiation (WBI) and accelerated partial-breast irradiation (APBI) were associated with low rates of the cancer recurring in the breast where the disease originally developed. The median follow-up ranged from more than 5 years to more than 10 years.

US and Canadian researchers presented results from both trials at the San Antonio Breast Cancer Symposium on December 6.

WBI is typically given to the whole breast in a series of treatments 5 days a week for 4 to 6 weeks. By comparison, APBI is given only to the part of the breast that has or had cancer in it, and the treatments are completed in a week or less.

Previous studies have shown that after a diagnosis of early-stage breast cancer, a lumpectomy followed by WBI decreases the risk of the cancer recurring in the same breast. But many women do not receive the recommended radiation therapy for various reasons, including the inconvenience of traveling to a distant treatment center.

By delivering larger individual doses of radiation across fewer treatment sessions, APBI has emerged as an alternative approach to WBI. Studies have shown that by treating the area of the breast in the vicinity of the original tumor, APBI can reduce recurrences.

The new trials provide head-to-head comparisons of the two approaches with long-term follow up.

In the US study, for instance, more than 95% of participants in each treatment group—those receiving either WBI or APBI—did not have a recurrence at a median follow-up of 10 years after their treatments ended. Investigators with the Canadian RAPID trial reported similar results, although the median follow-up was shorter.

“In both studies—and in both treatment arms—the outcomes overall were extremely good,” said Larissa Korde, M.D., of NCI’s Cancer Therapy Evaluation Program. Patients with early-stage breast cancer, she continued, “can use this information to decide whether APBI is the right course for them individually.”

Following Patients for More than a Decade

The NCI-supported National Surgical Adjuvant Breast and Bowel Project (NSABP), now part of NRG Oncology, led the US phase 3 trial. NSABP researchers randomly assigned 4,216 patients with breast cancer who had recently received a lumpectomy to treatment with APBI or WBI.

After a median follow-up of 10.2 years, 161 patients had a breast cancer recurrence: 90 patients who received APBI and 71 who received WBI. There were modest differences between the groups in terms of side effects.

“An Acceptable Choice for Many Women”

The two methods of radiation therapy produced similar, if not statistically equivalent, results, noted Frank Vicini, M.D., of 21st Century Oncology of Michigan, who presented the findings of the US study in San Antonio. “The less burdensome radiation method of APBI may be an acceptable choice for many women,” he added.

Dr. Vicini said that although APBI produced “good results for a large population of women and does remain a good option,” the study results also suggested that there are “limits to the extent that we can cut back” on the schedule and dose of radiation for certain patients and still achieve good outcomes.

More research is needed to develop tools such as biomarkers that could help predict which patients with early-stage breast cancer might benefit most from WBI or APBI, according to Dr. Korde.

In the RAPID study, 2,135 patients from Canada, Australia, and New Zealand were randomly assigned to receive WBI or APBI. Of this group, 82% of patients had invasive breast cancer and 18% had DCIS only. The median follow-up was 8.6 years.

Both treatment groups had low rates of tumor recurrence: In the APBI group, the 5-year and 8-year cumulative rates of recurrence were 2.3% and 3.0%, respectively, whereas the corresponding rates for the WBI group were 1.7% and 2.8%, respectively.

Dr. Korde noted that both trials have collected data on the toxic side effects and the effects on physical appearance associated with each type of radiation therapy.

“It will be helpful to have more data that can be used to better understand which patients have a low risk of toxicity with any type of radiation therapy, and therefore which patients might feel more comfortable with using the shorter course of APBI,” said Dr. Korde.

In the future, she continued, “additional information on toxicity from the NSABP trial will further add to this important discussion.”

Overall Breast Cancer Incidence Down Since 1999, Rates Increase for Women Under 40

0
U.S. breast cancer death rates decreased by about 1% per year between 2013 and 2018. What were the new case rates during that same...
Διαβάστε περισσότερα
World News

Overall Breast Cancer Incidence Down Since 1999, Rates Increase for Women Under 40

0
U.S. breast cancer death rates decreased by about 1% per year between 2013 and 2018. What were the new case rates during that same...
Διαβάστε περισσότερα