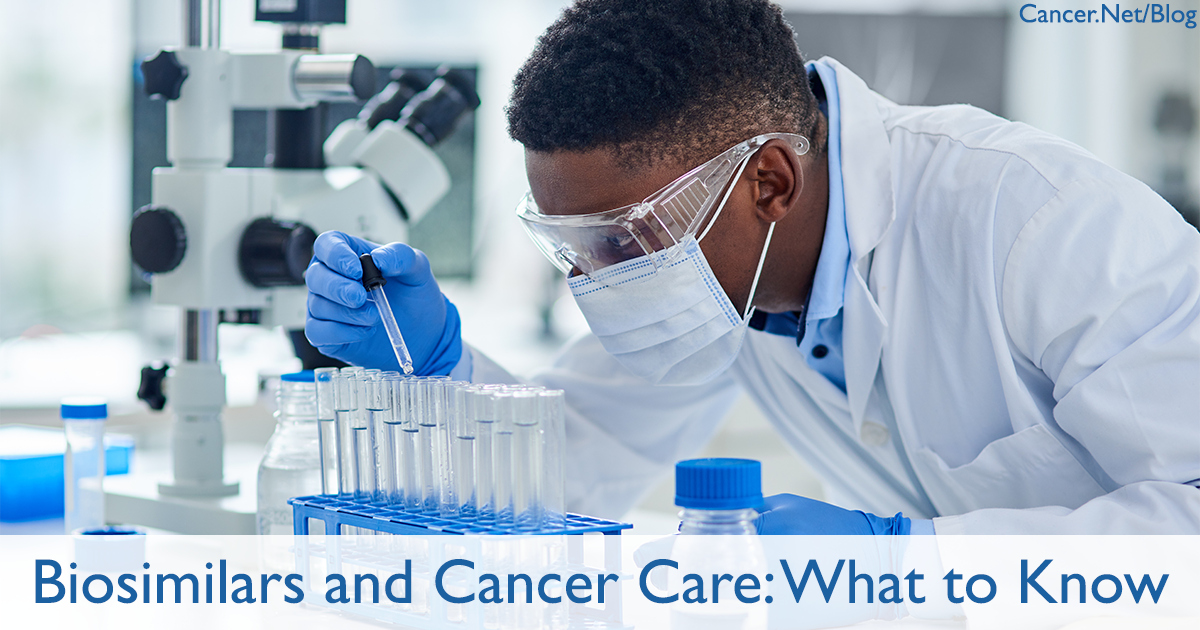 Lowering the cost of treatment would be welcome news for people with cancer and their loved ones. After all, 8 of the 10 most expensive drugs on the market are cancer drugs, according to a 2018 statement by the American Society of Clinical Oncology (ASCO).

1. What is a biosimilar?

A biosimilar is a version of a known and proven biologic drug. Biologic drugs are drugs that are made from living things like cells, tissues, or proteins. Vaccines and antibodies are examples of biologic drugs.

A biosimilar is somewhat like a generic version of a biologic drug, though the 2 are not entirely the same. A generic drug has the same active ingredients as its brand name drug. Biosimilars are not considered generic because there may be small differences between the biosimilar and its reference drug. However, these variations do not cause clinical differences in the biosimilar’s safety or how well it works.

2. How can biosimilars help with the cost of cancer care?

Biologic drugs are expensive. They treat some of the most difficult, deadly diseases. They are also more complex in structure than other drugs. They are often tricky to manufacture and store because they are made from living things. They are sensitive to light and temperature, which means they need to be manufactured in tightly controlled environments. All of these factors add to the cost of the drug.

Biosimilars are based on drugs that have already gone through the expensive process of research and development, so they may cost less to make and to test than the reference biologic drugs. Because of this, biosimilars can offer lower-price options for patients while delivering the same treatment effectiveness. The costs of biosimilars may be different for different patients. That’s because coverage for drugs differs between health insurance providers like Medicare, Medicaid, or private insurance. While biosimilars may cost less than their reference drugs, biosimilars are still not low-cost treatment options for cancer.

Researchers believe that biosimilars can eventually be interchanged for biologic drugs. Interchangeability would mean that the safety and effectiveness of the treatment would not change if a patient were switched to a biosimilar from the reference drug.

3. What kinds of biosimilars are used to treat cancer?

In the United States, FDA-approved biosimilars can be used to treat breast cancer, stomach cancer, colorectal cancer, and other cancers. They can also be used to treat side effects of cancer treatments, such as low white blood cell counts that increase the risk of infections. Below are some of the cancer-related biosimilars currently approved in the United States. You can also find a list of all FDA-approved biosimilar drugs on their website.

Educators Raise Money in Memory of Teacher Who Dedicated Herself to...

Husband Turns Wife’s Inspiring Poem for Her Daughters into a Book...

Assessment of Patients’ Perspective on the Consequences of the COVID-19 Pandemic...

Green Beret With Lung Cancer Surprised With Hundreds Of ‘Thank You’...