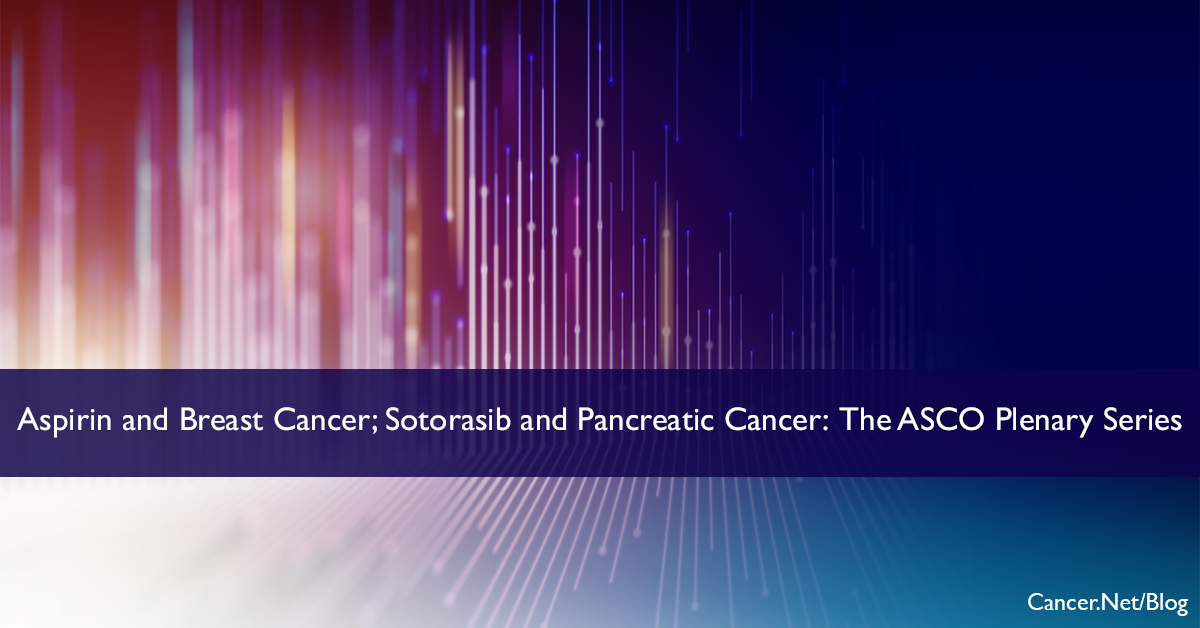 The February 2022 session in the ASCO Plenary Series features 2 studies:

Who does this study affect: People treated for HER2-negative breast cancer with a high risk of recurrence.

This study included 3,021 people who had invasive HER2-negative breast cancer (both triple negative breast cancer and hormone receptor-positive breast cancer) and were between 18 and 70 years old. To join this clinical trial, participants needed to have a higher risk of recurrence. Among those with HR-positive cancer, the cancer had to also be node-positive, meaning it had spread to lymph nodes, and diagnosed in the past 10 years. Among those with HR-negative cancer, the cancer could be either node-positive or the tumor was larger than 2 centimeters, and it had to have been diagnosed in the past 18 months (about 1 and a half years). The participants were evenly divided into 2 groups. The first group received 300 milligrams of aspirin daily for 5 years. The control group received a placebo pill daily for 5 years. Neither the study participants nor the researchers involved in this study knew whether the participants were receiving the aspirin or the placebo. This kind of study is called a double-blind, placebo-controlled study, and it is a very reliable way to figure out if a treatment is effective without introducing bias.

The researchers were trying to determine how effective aspirin was at preventing recurrence by measuring invasive disease-free survival (iDFS). iDFS is a measurement of the amount of time between the initial treatment for cancer and the time until cancer returns. The participants were observed for a median of 20 months, which means half were observed for more than 20 months and the other half were observed for less than 20 months. Among those taking aspirin, 107 patients had their cancer come back, and among those in the control group, 84 had their cancer come back. At that point, it was calculated that people in the aspirin group did not have a lower rate of cancer recurrence, and it was unlikely that aspirin would be helpful in preventing breast cancer recurrence. The group of experts responsible for judging the safety of the clinical trial (called a Data and Safety Monitoring Board) recommended that participants be notified which treatment group they were in. This ended the clinical trial.

What does this mean for patients: Aspirin did not help prevent recurrence among people diagnosed with HER2-negative breast cancer and a high risk of recurrence.

“Although inflammation may still play a role in cancer progression, aspirin is not recommended for prevention of breast cancer recurrence.”

Who does this study affect: People with advanced pancreatic cancer with a KRAS G12C mutation.

What did this study find: A report from an ongoing clinical trial, called CodeBreaK 100, has shown that a medication called sotorasib might be an effective treatment for advanced pancreatic cancer with a specific genetic mutation. Sotorasib is a targeted therapy that targets a genetic change called a KRAS G12C mutation. CodeBreaK 100 is a phase I/II clinical trial testing whether such tumors respond to sotorasib and the treatment is safe for patients.

In pancreatic cancer, the KRAS mutation is found in about 90% of cases. Between 1% and 2% of metastatic pancreatic cancers will have a specific type of change in the KRAS gene, called G12C. The standard treatment for this diagnosis uses combinations of chemotherapy. If the cancer is not stopped by 2 different lines of chemotherapy, there are no treatments proven to help patients live longer.

This study included 38 people with pancreatic cancer. The average age of the participants was 65 years, and 3 of every 4 were men. By the time the study began, all participants had stage IV cancer, and about 4 of every 5 had received 2 or more lines of treatment.

What does this mean for patients: This phase I/II clinical trial showed that advanced pancreatic cancer with the KRAS G12C genetic change responded to sotorasib and that treatment side effects are manageable for patients.

“These data are promising for pancreatic cancer patients with high unmet medical need who have limited treatment options.”

Coping With Cancer Recurrence: My Perspective As Both a Patient and...