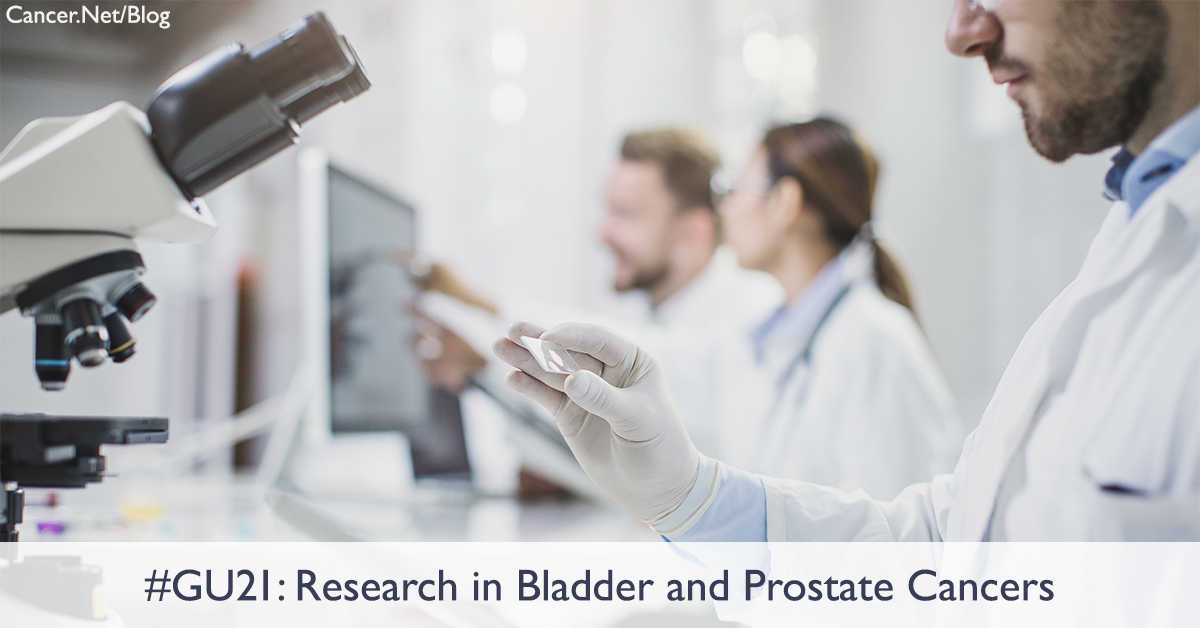 The 2021 Genitourinary Cancers Symposium will be held virtually February 11 to 13. This conference highlights research on improving the treatment and care of people with genitourinary cancers, including those with bladder cancer, kidney cancer, penile cancer, prostate cancer, and testicular cancer.

You can learn more about research from this symposium by following the #GU21 hashtag on Twitter.

Summaries of 2 studies that will be presented at the symposium are described below:

A phase III clinical trial called CheckMate 274 found that adding the immunotherapy nivolumab (Opdivo) for the treatment of muscle-invasive urothelial carcinoma with a high risk of recurrence nearly doubled disease-free survival. Disease-free survival is the length of time after a person receives treatment that no cancer is found.

Nivolumab is a type of immunotherapy called an immune checkpoint inhibitor that works by blocking the protein PD-1, which contributes to cancer cell growth and survival. By blocking PD-1, the immunotherapy helps the immune system to recognize and attack cancer cells.

This study included people with high-risk muscle-invasive urothelial carcinoma who were randomly assigned to receive either nivolumab (353 patients) or a placebo (356 patients) after surgery with or without neoadjuvant chemotherapy. The study found that those who received nivolumab had a disease-free survival of 21 months, compared with nearly 11 months in those who received the placebo after initial treatment. Among those whose tumors expressed PD-L1, a protein that interacts with PD-1, disease-free survival was also improved.

Patients receiving nivolumab more commonly experienced severe side effects (17.9%), compared with those who received the placebo (7.2%).

What does this mean? For people with high-risk muscle-invasive urothelial carcinoma, including those who cannot receive chemotherapy, nivolumab given after surgery may significantly reduce the chances of cancer coming back.

“Nivolumab is the first immune therapy to be used in the adjuvant setting that provides a statistically significant and clinically meaningful improvement in disease-free survival for patients with high-risk muscle-invasive urothelial carcinoma after radical surgery with curative intent, irrespective of PD-L1 status.”

Researchers have found that an increase in diagnoses of metastatic prostate cancer in the United States between 2008 and 2016 may be the result of less use of prostate-specific antigen (PSA) screening.

PSA is a substance found in the blood that is primarily made by the prostate gland. It can be found in higher levels in people with various prostate conditions, including prostate cancer. Using PSA testing to screen people for prostate cancer when they have no symptoms has been controversial. PSA testing is helpful in finding prostate cancer earlier and before it can spread to other parts of the body, but it can also lead to unnecessary or excessive treatment, which can have a significant impact on a person’s quality of life. In its guidance in 2008 and 2012, the U.S. Preventive Services Task Force (USPSTF) did not recommend PSA screening for most individuals. In 2018, the USPSTF issued new recommendations that individuals aged 55 to 69 should discuss with their doctor whether PSA screening is right for them.

What does this mean? In states where less PSA screening was used, researchers found an associated increase in diagnoses of metastatic prostate cancer. This underscores why it is important for patients and doctors to discuss whether PSA screening is right for them.

“The variation between states is one of the precise strengths of our study. The magnitude of decreased PSA screening was correlated to the magnitude of increased metastatic disease, suggesting that there may be a link at population level.”

What Is Mindfulness and How Can It Help People With Cancer?

Invasive Lobular Carcinoma Is Invisible On Mammograms, Isn’t A Lump

Breast-Cancer Mom Is Living On 84 Pence As She Fights For...

Cancer Patient’s Appetite Increases And His Blood Pressure Lowers After A...

Opinion: ‘Let’s not be short-sighted – the UK’s medical research charities...