NExT: Advancing Promising Cancer Therapies from the Lab to Clinical Trials 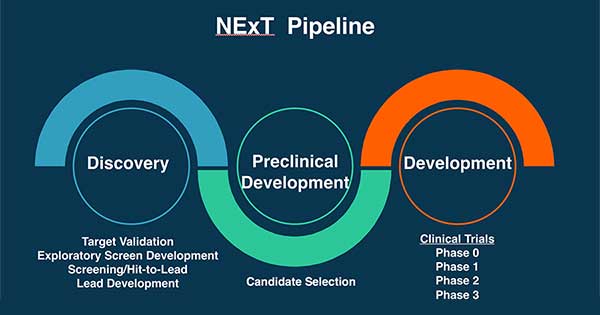 James Doroshow, M.D., is director of NCI’s Division of Cancer Treatment and Diagnosis, and Barbara Mroczkowski, Ph.D., is the director of the NCI Experimental Therapeutics (NExT) program.

At the intersection of the federal government and the private sector lies a unique program called the NCI Experimental Therapeutics (NExT) program.

Although NCI operates the program, it runs very much like a small pharmaceutical or biotechnology company, working with external investigators and top scientific experts to advance promising or novel therapies from the earliest stages of research to human clinical trials.

Earlier this week, in fact, we were encouraged to see signs of promise from one NExT-developed therapy, when researchers from Duke University reported results from the first human trial of their cancer-killing, or oncolytic, virus therapy in patients with the brain cancer glioblastoma.

The genetically-modified poliovirus therapy, called PVSRIPO, is a feat of remarkable engineering: an inactivated poliovirus that has been programmed to target cells harboring a protein called CD155, which is overexpressed in many different cancer types, including glioblastoma.

The results from the phase 1 trial—presented on June 26 at the International Conference on Brain Tumor Research and Therapy and published simultaneously in the New England Journal of Medicine—are preliminary, but they also hint at a potentially important advance.

The trial enrolled patients with advanced glioblastoma whose cancer had progressed after numerous earlier treatments. Although phase 1 trials are primarily meant to assess whether a therapy is safe enough to move into larger human studies, the trial’s lead investigator, Matthias Gromeier, M.D., and his colleagues reported that the 2- and 3-year survival rates among those in the trial were substantially higher than what is historically seen in patients with this highly fatal cancer.

Far more work needs to be done to determine whether the therapy is truly safe and effective. But the release of these results is an ideal example of what the NExT program was designed to do.

NExT focuses primarily on therapies that have the potential to provide an important advance or meet a critical need but are unlikely to initially attract private sector investment because they are too high risk or may only be of potential benefit to a small patient population.

And the poliovirus therapy is a good example.

For more than a decade, NCI worked with the Duke team to transform a virus with a propensity for killing cancer cells into a clinical-grade therapy. That painstaking work improved the virus’s potency in eradicating tumor cells while ensuring that it would not mutate into a disease-causing infectious agent. This effort involved extensive laboratory testing and manufacturing work by many investigators, including the development of a next-generation sequencing test to ensure the engineered virus was genetically stable from batch to batch.

The development and production of this oncolytic virus required difficult, complicated science that relies on technology and expertise that is not available at most institutions, even large academic centers. And it involved a type of therapy that, at the time PVSRIPO was accepted into the program, the private sector considered to be high risk and was unwilling to pursue. [One oncolytic virus is now approved to treat cancer, melanoma, and others are being tested in clinical trials.]

Excitingly, this therapy will soon be tested in trials involving other cancer types, including childhood brain cancers, breast cancer, and melanoma.

This oncolytic virus is just one example of NExT in action. There are others, and their rapid ascension through the NExT development pipeline reflects the evolution and maturation of this program.

For example, although NExT has always relied on cutting-edge science and the expertise of leading researchers and clinicians, over the past decade NExT has approached developing drugs much like biotechnology or pharmaceutical companies do.

That includes doing things like forming multidisciplinary teams to address the critical factors needed to move a therapy forward. The members of these teams include scientists from outside NCI with the specific expertise needed to advance drugs through the development process, from optimizing the chemical structure of a small-molecule drug to how best to test certain types of therapies in cell lines and preclinical animal models.

It also means embracing a sense of urgency by establishing aggressive timelines so that the agents in the NExT pipeline can advance through this preclinical process as expeditiously as possible.

For example, researchers at Vanderbilt University initially discovered a small-molecule drug that targets the protein MCL-1, one of the most commonly overexpressed proteins in human cancer. MCL-1 has also been linked in a number of studies to treatment resistance, making it a highly attractive target for a cancer therapy.

Stephen Fesik, Ph.D., and his colleagues at Vanderbilt initially applied to the NExT program in 2013 to help further develop their MCL-1 inhibitor. After being accepted, the compound then went through numerous studies, including complex analyses to understand and optimize its structure so that it more effectively binds to its target on cancer cells, thus reducing the risk of side effects.

Those efforts paid off earlier this spring, with the licensure of this agent to the pharmaceutical company Boehringer Ingelheim, where it is anticipated to be tested in human clinical trials.

Another compound that recently graduated from NExT is one that blocks the activity of mutant forms of the protein IDH1, which are thought to be important drivers in glioblastoma.

Initially accepted into the NExT program in 2011, this compound has been tested extensively in the lab to ensure that it potently blocks the activity of IDH1 in cancer cells, to validate its ability to shrink tumors with IDH1 mutations, and to identify any signs of potential side effects.

Like the MCL-1 inhibitor, this drug was recently licensed to a private-sector company, in this case Fortress Biotech, where it is also expected to continue its progression toward human clinical trials.

Validation of the NExT Approach

The rapid turnaround from an initial compound to the brink of human studies seen with both the MCL-1 and IDH1 inhibitors is on par with what is typically achieved in the private sector.

With at least one other agent in the NExT pipeline poised for licensure, we believe this is a validation of the program and its approach to advancing the development of promising new cancer therapies.

We encourage all investigators—in academia or the nonprofit or private sectors—with a promising lead on a potentially game-changing therapy to apply to the NExT program. We believe we have a proven model, one that is only getting better with time.

And whether you are a cancer researcher or somebody who has been touched by cancer, that’s definitely good news.