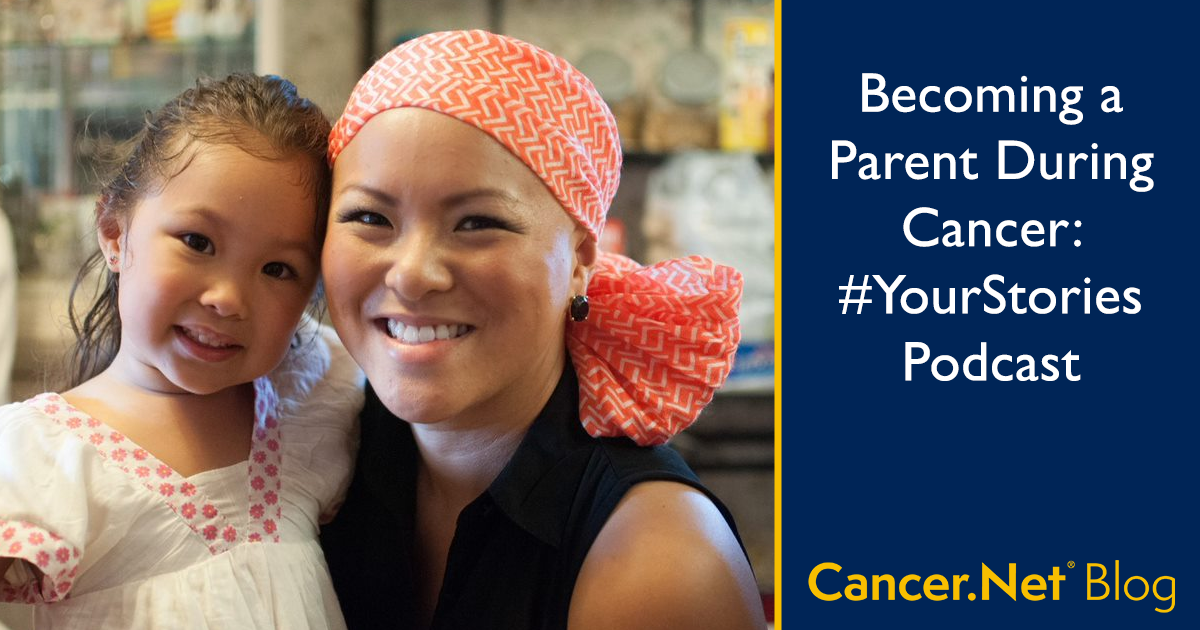 Conquer Cancer, the ASCO Foundation, developed the podcast series Your Stories: Conquering Cancer to showcase unscripted conversations between patients, doctors, and the family and friends who conquer cancer with them. In the episode “Thriving,” Don Dizon, MD, FACP, FASCO, speaks with Mai Achong, a 2-time cancer survivor, about listening to your body, parenthood after cancer, and the power of persistence.

Mai had dreamed of being pregnant and having a child, but for years, she felt something was off with her body. She refused to stop seeking answers until she finally received a diagnosis at age 26: ovarian cancer. Although she survived the diagnosis and became a mom, she would eventually face cancer again.

In this episode, Mai shares her tips for self-advocacy while navigating the health care system, perspectives on being a parent while conquering cancer, and insights on making decisions about fertility while in treatment. She also talks about the benefits of joining a support community.

In her early to mid-20s, Mai told doctors about her chronic pain and fatigue, abnormal bleeding, and irregular menstruation. It took multiple follow-ups and second opinions for Mai to uncover the culprit of her symptoms: she had ovarian cancer.

The diagnosis hurled Mai into a whirlwind of events. Within a brief time, she underwent treatment, her disease went into remission, and she became pregnant. Since people with ovarian cancer can face relatively low survival rates and a heightened risk of infertility, Mai considered her pregnancy a meaningful milestone.

“I was shocked,” says Mai. “I wasn’t ready. I was like, ‘I’m 26, I have cancer, and now I overcame that, and now I’m pregnant.’ Like, how does this happen in the blink of an eye? I was so grateful that, just months before, I thought I would possibly never have a child, and then having that blessing of being pregnant and knowing that I was going to be a mom.”

A few years after finishing cancer treatment and giving birth, Mai experienced more warning signs from her body. Yet again, it was a challenge to find answers. Building trust with a new oncologist was pivotal for Mai. This provider confirmed Mai’s suspicions: her cancer had returned.

“I remember them telling me it was cancer, and immediately [feeling] angry and crying,” says Mai. “And I haven’t shed a lot of tears for cancer. When my new provider came in and explained to me how spread it was and that it should have been handled by oncology, I think I started ugly crying.”

Frustrated by the process but encouraged by the vital lessons she had learned during her previous diagnosis, Mai became a health care advocate. Now, she tells people with cancer, survivors, and caregivers about the importance of trusting your body’s signals, having a list of questions for your providers before health visits, and taking notes before and during appointments.

“It’s taught me to advocate for myself, and thankfully I have a care team that listens and watches and communicates,” says Mai. “It’s better to ask the questions and push a little bit to find the right answers than it is to not ask enough.”

Mai also encourages people with cancer to build support systems. Joining support groups focused on gynecologic cancers has been immensely helpful for Mai during and after treatment. These communities connect people with cancer and survivors to others who can relate to their experiences. Getting involved with support groups has proved life-changing for Mai as she conquers cancer one step at a time.

“I conquer cancer by thriving,” says Mai. “Waking up, using my limbs, being as healthy as I can be, moving my body, loving my family, and living and moving forward.”

Over 600 people in England set to benefit from innovative lung...

Breast Cancer Survivor Fights Back After Instagram Bans Photos of Her...

Empowering People With Cancer: A Q&A With Cancer.Net Editor in Chief...

At NCI, A Robust and Rapid Response to the COVID-19 Pandemic