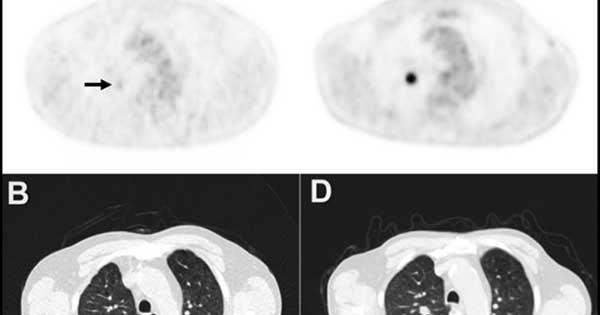 A new study has identified a potential biomarker of early-stage non–small cell lung cancer (NSCLC). The biomarker could help diagnose precancerous lung growths (called nodules or lesions) and early-stage lung cancers noninvasively and distinguish them from lung nodules that are not cancer (benign), the study investigators said.

“This study is a critical first step in characterizing precancerous and early-stage lung cancer lesions, which could lead to their better clinical management,” said Sudhir Srivastava, Ph.D., M.P.H., who heads the Early Detection Research Network in NCI’s Division of Cancer Prevention and was not involved in the study.

However, Dr. Srivastava and the study authors noted, the study was done primarily in mice and findings will need to be replicated in human studies before they can be applied in everyday clinical practice.

Published November 14 in Science Translational Medicine, the study “provides clues that could potentially help doctors sort out which lung nodules detected on CT scans are more likely to go on to be malignant lesions and which ones don’t need any further follow-up,” said Bruce Johnson, M.D., a lung cancer specialist at the Dana-Farber Cancer Institute, who was not involved in the research.

Evidence from the study also suggests that SGLT2 may be a new target for treatments that could prevent precancerous growths or early-stage NSCLCs from progressing, said lead author Claudio Scafoglio, M.D., Ph.D., of the Jonsson Comprehensive Cancer Center and the David Geffen School of Medicine at UCLA.

Finding and treating lung cancer early, before it has spread, markedly increases a person’s chances of survival. But early diagnosis of lung cancer has proved challenging, even in people at high risk of the disease, such as current or former heavy smokers.

One major challenge is that lung cancer screening with low-dose CT scans often detects small lung nodules, or lesions, that cannot be diagnosed as clearly benign or clearly cancerous. These lesions, known as indeterminate nodules, typically require follow-up with repeated CT scans, a biopsy, or even surgery.

Although most of these nodules turn out to be benign, no standard guidelines exist for monitoring them, said Dr. Srivastava.

To develop better ways of monitoring such nodules, researchers look for differences that distinguish normal cells from tumor cells—ideally, differences that could be detected noninvasively, such as through a blood test or imaging procedure.

Tumor cells take up more glucose than normal cells because they need more sugar to fuel their rapid growth. This greater uptake of glucose by tumor cells, in fact, forms the basis for using imaging with PET scans as a standard approach to help assign a stage to lung cancer and some other cancers.

For a PET scan, a small amount of a radiolabeled tracer substance—a radioactive form of glucose called FDG—is injected into a vein. Malignant tumor cells show up bright in PET scan images because they take up more of the labeled sugar than normal cells.

Glucose uptake occurs primarily through a family of glucose transport molecules known as GLUTs, which are often found at much higher levels in cancer cells than in normal cells. But more recent work by Dr. Scafoglio and his UCLA colleagues showed that tumor cells in some cancers, including human pancreatic and prostate cancers, also contain, or express, SGLT2—which is normally found only in the kidney—and they use it to take up glucose.

“The current way that we use PET imaging to detect glucose uptake by tumor cells does not detect SGLT2,” Dr. Scafoglio said. That’s because FDG is taken up by GLUTs but not by SGLTs.

However, in their studies in mice, he continued, “if we use a different tracer to do PET imaging—a radiolabeled sugar called Me4FDG that is specifically taken up by SGLT2—then we’re able to detect glucose uptake in lung nodules containing this alternative sugar transport molecule.”

SGLT2 as a Marker of Early-Stage NSCLC

The UCLA team first studied the expression of SGLT2 and GLUT1 in patient tissue samples from lung nodules that had been detected during lung cancer screening or incidentally during other screening exams or procedures.

The team found unusually high levels of SGLT2 in nodules that turned out to be precancerous and in early-stage lung adenocarcinoma, which is the predominant form of NSCLC. Patient tissue from more advanced NSCLCs contained a mixture of SGLT2 and GLUT1. By contrast, the team detected neither SGLT2 nor GLUT1 in tissue samples of normal alveoli—tiny air sacs in the lung where lung adenocarcinoma originates.

Next, the researchers used a combination of immunohistochemistry and PET scans with either FDG or Me4FDG as the tracer to study how GLUT1 and SGLT2 expression and activity changed over time in mice that were genetically engineered to develop lung adenocarcinomas.

Because SGLT2 appeared to play a central role in glucose uptake only in premalignant lung nodules and early-stage tumors, the researchers speculated that SGLT2 may be required for tumor growth in the early stages of lung cancer development.

They tested the effects of blocking SGLT2 in several mouse models of lung cancer by using the drug canagliflozin (Invokana), which targets SGLT2 and was recently approved by the Food and Drug Administration to treat type 2 diabetes.

Treatment with canagliflozin reduced tumor growth and modestly prolonged survival both in the genetically engineered mouse model and in a PDX mouse model, a mouse model more relevant to human cancers, in which tumor tissue taken from patients with NSCLC is implanted into the animals. In addition, PET imaging of the PDX mice suggested that Me4FDG may be used as a tracer for imaging to evaluate the response to drugs that inhibit SGLT2.

On the basis of these mouse studies, “We think that drugs that block glucose uptake by inhibiting SGLT2 could be used to treat early-stage lung cancer or even to prevent premalignant lesions from developing into cancer,” Dr. Scafoglio said.

However, Dr. Johnson cautioned, the effects of canagliflozin treatment on tumor growth and survival in the mice were modest. And although the mouse findings are interesting and encouraging, they are still “a long way from being applied to altering the growth of human lung cancers,” he said.

Moving to Studies in Patients

Progress in the prevention and treatment of early-stage lung cancer “has been fairly dismal in the last 15–20 years,” said senior study author David Shackelford, Ph.D., also of UCLA. He, Dr. Scafoglio, and their colleagues hope that their ongoing studies can help to buck that trend.

“Most of the convincing data in this study comes from mouse models,” so it will be important to show the expression pattern of SGLT2 over time in people with NSCLC, Dr. Srivastava said.

He added that as part of the Human Tumor Atlas Network, a new NCI-funded program, researchers including Steven Dubinett, M.D., of UCLA, an author on the SGLT2 study, will document the change in cellular, structural, and molecular characteristics that occur over time in human cancers, including lung cancer.

To learn more about the role of SGLT2 in cancer, Dr. Scafoglio and his colleagues are using a genetic mouse model of lung cancer that allows them to knock out SGLT2 function to see whether the transporter is absolutely required for tumor development. “We also want to know why the tumors change the way they transport glucose as the cancer progresses,” Dr. Scafoglio said.

Selumetinib Approved by FDA to Treat Children with NF1

Your Microbiome and Cancer: What to Know

Building Your Fort of Support: Tips from a Breast Cancer Social...

Malaria Vaccine Approved by W.H.O. Could Save Tens Of Thousands Of...