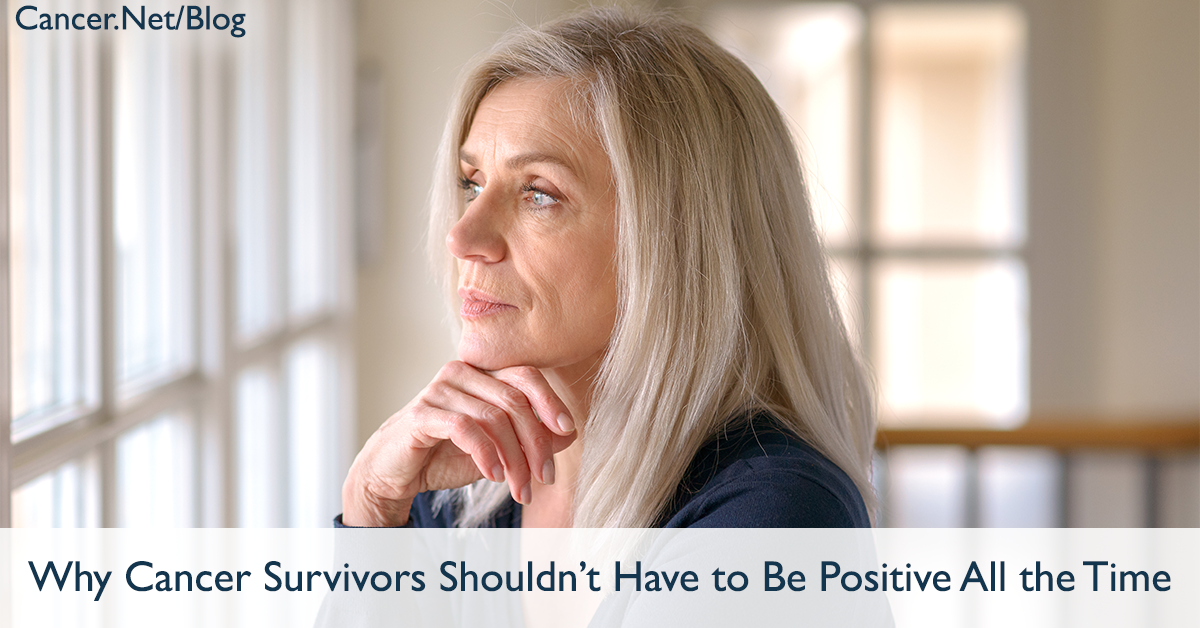 Cordelia Galgut, PhD, is a British registered counseling psychologist. She lives and works in private practice in London, England. Dr. Galgut has written 3 books on the psychological impact of cancer, the latest of which is called, “Living with The Long-Term Effects of Cancer.” She is passionate about highlighting the mismatch between what people think having cancer is like and what the actual reality is. You can follow Dr. Galgut on Twitter.

Ever since being twice diagnosed with breast cancer 17 years ago, I have been bombarded with statements along the lines of “You have to be positive and grateful you survived.” This used to really upset me. These days, it annoys me more than anything else.

Sadly, I don’t think many people’s entrenched beliefs that cancer survivors should always feel lucky or grateful to have survived have shifted much at all in that time. In fact, with the awful COVID-19 pandemic, those of us trying to live either with or beyond cancer have sometimes felt invisible.

For me, even more so today, there is an extra layer of doubt apparent in people’s eyes when I tell them about my long-term effects of cancer. It is like they are saying, “No way is she still affected by cancer after 17 years. That’s ridiculous.” But for me, I would say that some of my long-term effects are way worse today than they used to be. I hear the same from other cancer survivors, too.

And indeed, alongside the harsh reality of losing loved ones to cancer, I can see why people might feel so unwilling to believe the fact that cancer survivors may still be suffering. Yet, I myself have lost loved ones to cancer who have actually wanted me to speak out about how much and for how long they suffered before their deaths. It is possible to honor the memory of those people and still validate the emotional and physical suffering of those of us who live on.

Why cancer survivors can’t be positive all the time

For most people with cancer and survivors, there is 1 long-term effect that hinders our ability to “think positive”: the dread of a cancer recurrence and/or spread. Many of us feel this dread after a cancer diagnosis, yet we are often afraid to talk about it. Many cancers can and do recur, so it’s almost impossible to box off this fear.

In fact, with all the lingering long-term side effects and fears that can arise after cancer, why should we have to be positive and hopeful all the time—or at all? Both as a psychologist and sufferer of long-term side effects, I know it is not helpful to put pressure on ourselves to repress our negative emotions all the time. In fact, these emotions will tend to fester more if we try to shove them down, and trying to live and survive alongside them in this way is nearly impossible.

How to avoid the pressure to be positive during cancer survivorship

I share my experiences with cancer to let people know that it is normal to have negative feelings after treatment ends. This concept is so contrary to what survivors are told it is OK to feel after cancer! People have told me that hearing that negative feelings are normal has freed them up to be less guilt-ridden. Seeing the extent of the relief that these people have felt after hearing this message was a huge eye-opener to me.

In a way, these revelations have helped me to stop layering suffering on top of suffering myself. For example, instead of saying, “I’m really struggling, but I shouldn’t be,” now I more easily let myself off the hook and say, “I’m suffering enough, and I don’t have to feel guilty for doing so or put pressure on myself to feel positive when I don’t.”

And though I am quite against the instruction I have often been given to “move on” and “get over” cancer, it is certainly the case that in my own life, once I have been able to give myself permission to feel less guilty and less positive, I have more easily experienced a kind of release. For example, I have found the courage to tell people I find particularly pesky and the world at large how I feel rather than silencing myself.

This speaking out has, in turn, helped me to move through to better places emotionally, or at least to tolerate my life as it is now better than I did before. That is not to say that I find my life easy at all, but at least I am not putting that same pressure on myself to repress my negative feelings.

If you find yourself in a similar position and are struggling with the feeling of having to be grateful or positive all the time, it may help to:

The author has no relevant relationships to disclose.

How targeted screening can help the NHS save lives from lung...

COVID-19 Is Decimating Nursing Homes, So GreaterGood Has Donated Masks To...

Why I Choose to Live With Gratitude During Metastatic Breast Cancer

Picking out the sound of tumours