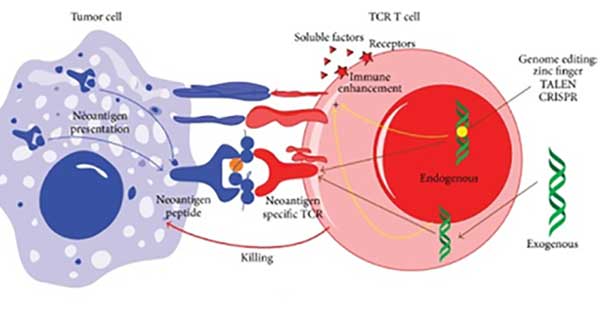 Researchers have taken the first steps toward developing a vaccine to prevent cancer in people with Lynch syndrome, an inherited condition that elevates a person’s risk of colorectal, endometrial, and other types of cancer.

The scientists, led by Steven Lipkin, M.D., Ph.D., of Weill Cornell Medicine, reported results from NCI-funded tests of a cancer prevention vaccine at a recent meeting. The vaccine prevented the growth of colorectal tumors in a mouse model of Lynch syndrome and prolonged the mice’s survival compared with unvaccinated mice.

“The simplicity of this approach means that it is promising to take forward” to a human vaccine, Dr. Lipkin said during a press briefing April 1 at the American Association for Cancer Research annual meeting in Atlanta.

As the cost of genetic testing decreases and more people get tested for hereditary cancer syndromes, researchers are learning that Lynch syndrome is more common than once thought. It is currently estimated that 1 in every 280 Americans has the disorder, which translates to about 1.1 million people.

A vaccine could offer another, potentially more efficient, way to hinder cancer development.

Lynch syndrome is caused by inherited gene mutations that prevent the repair of DNA errors that arise as cells divide, a defect called mismatch repair deficiency.

“It’s like not having a DNA spell-checker,” said Asad Umar, D.V.M., Ph.D., of NCI’s Division of Cancer Prevention (DCP). Without this defense, DNA errors accumulate in cells and may eventually lead to a variety of cancers.

Short repeated segments of DNA called microsatellites are especially prone to DNA mismatch errors. Tumors that are mismatch repair-deficient end up accumulating alterations in these microsatellites, a condition known as microsatellite instability.

A silver lining to microsatellite instability is that it has the potential to create novel proteins, known as neoantigens, that are unnatural to the body. Neoantigens can trigger the immune system to launch an attack on the cells that make these proteins.

Recent data suggests that some people with microsatellite instability-high cancer have evidence of an immune reaction against several of these shared neoantigens.

The presence of shared tumor neoantigens among people with Lynch syndrome “raises the possibility of being able to create a single type of vaccine that might work for millions of people,” said Dr. Weiner.

In past attempts to develop cancer vaccines, scientists used proteins that are found at higher than normal levels in cancer cells. But, because these proteins are also made by normal cells, there were concerns about unintentional side effects, Dr. Weiner pointed out.

A neoantigen-based vaccine wouldn’t have that issue, he said.

Developing and Optimizing a Cancer Vaccine

In 2011, researchers from DKFZ—the German Cancer Research Center in Heidelberg, Germany—began clinical testing of a neoantigen vaccine in people who had advanced colorectal cancer that was microsatellite instability-high.

DCP’s PREVENT Cancer Preclinical Drug Development Program, which focuses on unmet needs in cancer prevention that are not adequately addressed by the private sector, recognized the potential of this vaccine to prevent cancer in individuals with Lynch syndrome.

Dr. Lipkin, together with researchers from DKFZ, were awarded funding from the PREVENT Program to develop a cancer prevention vaccine in mice and investigate treatments that might boost its efficacy.

First, the scientists scoured DNA from 32 colorectal tumors that developed in the mouse model of Lynch syndrome and identified 13 shared mutations.

The researchers then used an algorithm to predict which of the shared mutations would create neoantigens, narrowing the number of candidates down to 10. When they injected these 10 neoantigens into mice, four triggered a strong immune response.

These four neoantigens were combined to create the mouse vaccine. Administering the vaccine plus an adjuvant in the mouse model of Lynch syndrome reduced the development of colorectal tumors and prolonged survival, they found.

“This is one of the first cancer immunoprevention vaccines that uses anticipated neoantigens that might be formed from DNA mismatch repair defects,” Dr. Umar said.

Next, the researchers determined whether combining the vaccine with other treatments could boost its efficacy.

In addition to aspirin, studies have demonstrated that naproxen (Naprosyn), a commonly used pain reliever and anti-inflammatory medication, can prevent cancer in mice. Naproxen’s potential to prevent cancer in people with Lynch syndrome is being evaluated in an ongoing NCI-funded clinical trial.

Dr. Lipkin’s team demonstrated that naproxen was better than aspirin or a control treatment at decreasing the development of colorectal tumors in the mouse model.

Other professional groups recommend Lynch syndrome testing for all patients diagnosed with colorectal and endometrial cancer. If Lynch syndrome is diagnosed, it is recommended that the patient’s first-degree relatives be tested for the condition as well.

Genetic testing for Lynch syndrome is often covered by insurers, including Medicare, noted Dr. Lipkin. If insurance does not cover the cost, out-of-pocket costs are about $249 or less for major genetic testing companies, he added.

However, experts agree that more needs to be done to expand genetic testing for Lynch syndrome.

Moving Toward A Human Vaccine

To develop a neoantigen vaccine for humans, Dr. Lipkin and his colleagues plan to identify shared neoantigens that occur in the early-stage colorectal tumors of people with Lynch syndrome. This project was awarded NCI funding via the Cancer MoonshotSMImmuno-Oncology Translational Network.

If human trials of a cancer prevention vaccine do move forward, Dr. Lipkin noted, it will take several years to determine whether it works.

In the meantime, his team is using the mouse model to better understand exactly how the vaccine works and ways that growing cancer cells can become resistant to its effects.

What could DeepMind ‘solving’ the protein folding problem mean for cancer...

On your marks, get set… start-up!