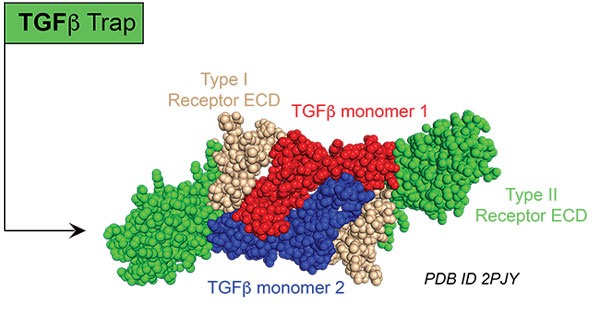 To try to develop more effective immunotherapies, two groups of researchers, working independently, have developed a type of drug that simultaneously targets two proteins involved in suppressing the body’s immune response against tumors.

The researchers created the drugs by fusing a receptor for a protein called TGF-beta to a monoclonal antibody that targets a checkpoint protein, such as PD-L1 or CTLA-4. The result is a single hybrid molecule that blocks two pathways used by tumors to evade the immune system.

TGF-beta is often found in the tumor microenvironment and may, like immune checkpoint proteins, regulate the activity of immune cells. The TGF-beta receptor portion of the new immunotherapy drug binds to TGF-beta, “trapping” the protein and rendering it useless.

“TGF-beta is well known to be a bad actor in the tumor microenvironment, because it inhibits immune cells called T cells, which are the good guys,” said Jeffrey Schlom, Ph.D., of NCI’s Center for Cancer Research (CCR), who has led several preclinical studies of the new immunotherapy drug.

The drug, which is a type of therapy called a bifunctional fusion protein or a Y-trap, may be more effective than an immune checkpoint inhibitor alone while not substantially increasing the side effects for patients, according to the results of several recent studies.

Based on the NCI preclinical studies, James Gulley, M.D., Ph.D., of CCR and his colleagues began to test the drug, which targets PD-L1, in clinical trials. Meanwhile, a new study from researchers at the Johns Hopkins School of Medicine has also demonstrated the potential of two Y-traps tested in mouse models of cancer, including one that, like NCI’s drug, targets PD-L1.

“Targeting both a checkpoint inhibitor and other molecules, such as TGF-beta, gives you a much more effective way to block the immune suppression we so often see in tumors,” said Jeffrey Sosman, M.D., of the Robert H. Lurie Comprehensive Cancer Center of Northwestern University, who investigates immunotherapies but was not involved in the NCI clinical trials or the Johns Hopkins study.

Using a single drug to treat a patient’s cancer has some advantages over using multiple drugs, such as reducing potential side effects, Dr. Sosman noted.

In January 2018, NCI researchers reported the results of a phase 1 clinical trial of this approach with a molecule called M7824 in 19 patients with advanced cancer that had been treated previously. Based on the findings, including one patient who had a complete response, the researchers have expanded the trial to include additional patients.

Inhibiting both PD-L1 and TGF-beta is a promising therapeutic strategy “because these key pathways have independent and complementary roles in suppressing the immune response,” said Dr. Gulley, an immunotherapy researcher who co-led the NCI clinical trial.

“This is a very exciting approach,” he added, noting that in clinical trials the side effects of the new technology were similar to those of inhibitors that block the interaction of PD-1 and PD-L1 such as pembrolizumab (Keytruda) and nivolumab (Opdivo) and were largely manageable.

The researchers are also conducting early-phase clinical trials of M7824 in patients with pancreatic cancer and patients whose cancers are associated with the human papillomavirus. Additional phase 2 studies are in development, according to Dr. Schlom.

In experiments with mice, the two Y-traps developed at Johns Hopkins were more effective than the corresponding immune checkpoint inhibitors, including the anti-CTLA-4 antibody ipilimumab (Yervoy) and the anti-PD-L1 antibodies atezolizumab (Tecentriq) and avelumab (Bavencio), the researchers reported in Nature Communications on February 21.

“The antibody goes after CTLA-4 or PD-L1, and at the same time it can trap a molecule of interest, such as TGF-beta, that is helping to suppress the immune system,” said Atul Bedi, M.D., who led the Johns Hopkins team.

The researchers initially became interested in targeting TGF-beta as a way to limit the production of regulatory T cells, a type of immune cell that suppresses the activity of the immune system. Regulatory T cells infiltrate many advanced cancers, and this infiltration is associated with a poor prognosis.

“You need a powerful set of tools to address this situation,” he added. “With the Y-trap, we now have the ability to counteract a key mechanism of resistance to the immune response.”

Developing a Family of Y-Traps

Dr. Bedi noted, however, that regulatory T cells are not the only way tumors evade the immune system. The Johns Hopkins team is developing a family of Y-traps that can be used to target multiple factors that play a role in the body’s immune response to tumors.

Johns Hopkins has licensed the Y-trap technology to a new company that could begin to test the approach in patients, according to Dr. Bedi.

“The concept of using combined therapies for patients with cancer is a central theme in the development of new immunotherapies,” said Dr. Sosman. “The beauty of this approach is that it combines multiple therapies in a single molecule.”

The idea of using a single molecule for this purpose is not new, Dr. Sosman added. “But we now have examples of this approach that are getting into the clinic and showing activity in patients. We have molecules that clearly work.”

0
Danny Jordan is a television producer and father of a child with an upper limb difference. Since there aren’t many children’s books out there...
Διαβάστε περισσότερα
World News

0
Abby, Charlotte and Kat (left to right) in English Harbour after breaking the world record. Three British women, including one with an incurable cancer, have...
Διαβάστε περισσότερα
World News

0
Danny Jordan is a television producer and father of a child with an upper limb difference. Since there aren’t many children’s books out there...
Διαβάστε περισσότερα

0
Abby, Charlotte and Kat (left to right) in English Harbour after breaking the world record. Three British women, including one with an incurable cancer, have...
Διαβάστε περισσότερα

0
72-year-old Patrick Mitchell loves life and always wanted to live past 100, but everything changed when he found out that he had terminal stage...
Διαβάστε περισσότερα

0
As a new year of research gets underway, we ask two of our Research Committee Chairs to take stock of the incredible science done...
Διαβάστε περισσότερα

0
Breast cancer is on the rise among younger women. According to a study published in the Journal of the American Medical Association, there has been...
Διαβάστε περισσότερα