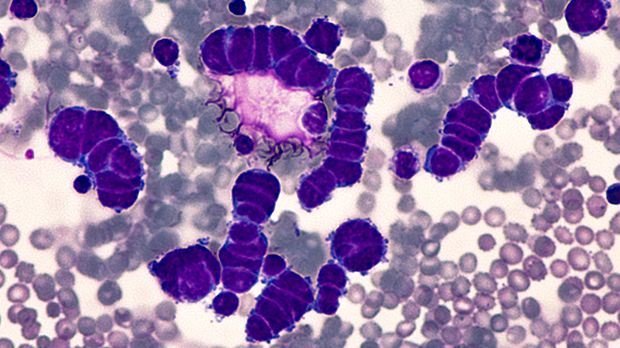 Lung cancer is the third most common cancer in the UK; every year around 48,500 people are diagnosed with the disease and unfortunately only 1 in 10 patients in England will survive their disease for 10 years or more.

Those diagnoses are often late, as early symptoms can be easily mistaken for other, less serious, conditions. On top of this, tumours often evolve over time, which can lead to drug resistance and treatment failure: only around 19% of people diagnosed with late-stage lung cancer in England survive their disease for 5 years or more.

Clearly, there’s still a pressing need for better ways to prevent, diagnose and treat lung cancer. We know it’s possible to develop them because, thanks to our supporters, researchers and clinicians, we’ve already achieved so much. From uncovering some of the causes of lung cancer, through to contributing to drugs used to treat it, Cancer Research UK’s impact is far reaching. Here are 7 ways we have worked towards progress in lung cancer.

Our scientists have been pivotal to discovering some of the genetic faults that can lead to the development of lung cancer, helping to improve our understanding of the disease.

EGFR is a protein on the surface of cells that helps the cells to grow and divide. Some cells have a fault in the EGFR gene, causing it to signal to the cancer cells to divide and make more copies.

As well as helping us learn more about the mechanisms of certain cancers, this discovery has also changed the face of cancer treatment. Previously, untargeted cytotoxic chemotherapy was essentially the only drug treatment available for cancers like lung cancer, as there was still little understanding of the mechanisms behind how they developed. But the discovery of EGFR paved the way for the development of targeted therapies.

Those include drugs like erlotinib and gefitinib, which block EGFR activity in cancer cells. Both are now used to treat non small cell lung cancer.

Around the same time, our scientists also tracked down faults in a gene called NRAS. This gene can drive the development of several types of cancer, including lung, melanoma, bowel and pancreatic cancers.

Over the next decade our researchers developed a broad understanding of how this and similar genes (collectively known as RAS genes) contribute to the growth of cancers. RAS genes are involved in a complex signalling pathway that ultimately turns on genes that tell the cell to start growing, dividing, and spreading. In some cases of cancer these genes become faulty and this signalling pathway is constantly switched on.

Years of research have shown that over a quarter of all cases of cancer are driven by faulty RAS proteins.

Now, similarly to EGFR, scientists are working on drugs that can alter RAS activity as a treatment for cancer.

Tobacco is the biggest cause of cancer in the world and the biggest driver of difference in life expectancy between the richest and poorest in England.

Reducing smoking rates is key in preventing lung cancer cases, and we have been at the heart of progress in tobacco control since the 1950s.

This year we launched our SmokeFree UK campaign

Our supporters helped us to campaign for smokefree workplaces, commonly referred to as ‘the smoking ban’, which first became law in Scotland in 2006, with Wales, England and Northern Ireland all following suit in 2007.

After that, along with the help of our supporters, we lobbied to cover up tobacco displays in shops and remove tobacco vending machines in 2011, and successfully campaigned for plain cigarette packaging, which came into force in 2015.

But our work isn’t done yet.

Recently, we launched our Smokefree campaign which aims to encourage MPs to become ‘Smokefree MPs’ and campaign to make sure the UK Government meets its target for England to be smokefree by 2030. You can get involved and email your MP and ask them to join and help prevent more cancers.

With the launch of our 2014 research strategy, we identified lung cancer as a strategic priority. Despite it being the most common cause of cancer death in the UK, there was limited lung cancer-specific research taking place around the country.

Since then, we have increased our research spend in the area, investing in both people and ideas that will radically change the way we think about lung cancer.

We committed over £10m to fund TRACERx – our flagship lung cancer research study, which aimed to track the evolution of individual people’s lung cancer over time.

We also established our Lung Cancer Centre of Excellence – a collaboration between the University of Manchester and University College London to bring together the unique and complementary strengths of the two organisations and create a collaborative environment where lung cancer research can flourish.

We invested in numerous other projects, including the National Lung Matrix Trial – our pioneering collaboration with pharmaceutical companies and the NHS to test the idea that genetic changes in people’s cancers could be used to match them to treatments.

Our research has contributed to the development of some of the drugs that have had the biggest impact on treating lung cancer, including cisplatin, carboplatin, pemetrexed and etoposide.

In the early 1970s a team of our researchers in London confirmed that the platinum-containing molecule now known as cisplatin was effective against cancer in laboratory models, and also identified exactly which parts of the molecule made it so effective.

Another one of our researchers, Dr Eve Wiltshaw at the Royal Marsden Hospital, led the clinical trials of cisplatin, giving the drug to patients for the first time in the UK.

Over subsequent years, cisplatin produced impressive results in patients with several different cancer types. It continues to be used for the treatment of some cancers today, including lung cancer. However, cisplatin can produce some challenging side effects, including sickness, kidney damage and an increased risk of infections. That sent researchers on a hunt for platinum-based cancer drugs that were just as effective as cisplatin but caused fewer side effects.

Drug development efforts by our scientists led to the chemotherapy drug carboplatin, which was trialled in the 1970s by clinicians at the Royal Marsden Hospital in London, whose work we also supported. It is now the most commonly used chemotherapy drug on the NHS. More than 26,000 people receive it every year.

As well as platinum-based chemotherapy drugs, our scientists have also been involved in the development of other drugs commonly used to treat lung cancer.

We headed one of the earliest trials of the drug pemetrexed – an antimetabolite which stops cancer cells making and repairing DNA so they can’t grow and multiply – establishing the maximum amount that can be given safely to patients. This helped to shape larger clinical trials to develop this new treatment further. In 2007, pemetrexed was approved by NICE for the treatment of some lung cancer patients.

We were also involved in the development of etoposide. During its early development, treatment with etoposide – which acts by destroying quickly dividing cells such as cancer cells – could cause unpredictable side effects. However, through monitoring its concentration in the blood, our researchers were able to find a way to reduce this unpredictability. Etoposide is now used in the treatment of lung cancer, sometimes in combination with carboplatin.

5 – Finding the mechanisms behind lung cancer in never-smokers

Although smoking remains the biggest risk factor for lung cancer, in the UK it is estimated that nearly 6,000 people who have never smoked die of lung cancer each year. However, until now, the mechanisms surrounding the causes of lung cancer in never-smokers have remained unclear.

Recently, groundbreaking research from the TRACERx lung study, presented at the ESMO conference in September, has shown that air pollution can cause cancer in people who have never smoked.

Scientists examined data taken from over 400,000 people from the UK and Asian countries, and found higher rates of EGFR mutant lung cancer, as well as higher rates of other types of cancer, in people living in areas with higher levels of PM2.5 pollution (tiny pollutant particles in the air smaller than 5% of the width of a human hair).

While this research is still in its early days, studies like this could help us to improve our fundamental understanding of some of the biology of lung cancer. In that respect, TRACERx is building on the discovery of EGFR’s impact on cancer growth in the 1980s. By finding out more about what causes cancer today, we should be able to better diagnose and treat it in the future.

6 – Laying the foundations for radiotherapy

Radiotherapy is the use of high energy x-rays to destroy cancer cells and is commonly used to treat lung cancer. And it is thanks in part to the work of our researchers that radiotherapy is the sophisticated and precise option for people with cancer that it is today.

A century ago, our pioneering research laid the foundations of modern radiotherapy. Back in the 1920s and 30s we investigated the clinical use of radium and worked with the Radium Commission to coordinate and monitor its use across the UK.

Since then, we have supported many leading physicists and radiologists to establish the principles of radiotherapy and its application to the clinic. Our researchers have also helped to build understanding on how to measure radiotherapy doses and shown how cells respond to radiation. This work has been crucial to radiotherapy becoming a mainstream anti-cancer treatment.

And things are still improving. In 2017 we got the results from our CONVERT trial, which looked at finding the best way to give radiotherapy to people with small cell lung cancer. The trial team found that having radiotherapy once a day worked as well as having it twice a day when you have it alongside chemotherapy. This means patients and doctors can choose together which treatment suits them best.

To keep driving radiotherapy research forward, in 2019 we announced RadNet, our multimillion-pound plan to establish a network of 7 national centres of excellence in radiation oncology and radiobiology. We hope that this will help to stimulate research in 3 key areas: discovery, translation and clinical use, to keep making radiotherapy more effective and safer for patients.

7 – Using blood tests to predict when lung cancer might return

As with many cancers, once lung cancer has been treated – with surgery, radiotherapy or chemotherapy – there is a chance of it returning.

After treatment, lung cancer patients are carefully followed up with tests including CT scans to find out if their tumour has been completely removed, but scans won’t pick up tiny quantities of cancer cells known as minimal residual disease, which could result in cancer returning in the future.

Scientists at our Cancer Research UK Cambridge Institute found that a personalised blood test – a type of liquid biopsy that can pick up fragments of tumour DNA in a person’s bloodstream – can be used to identify people who are at a higher risk of their lung cancer returning.

These fragments of DNA, called circulating tumour DNA, can also reveal the state of the tumour, its location and potentially its weaknesses, information that could provide vital clues on how best to treat individual people with lung cancer.

While more research is still needed to be sure that these tests will work in practice, liquid biopsies are well on their way to providing doctors with a simple, non-invasive way of spotting lung cancer earlier and tracking how the cancer changes over time.

Increasing focus on lung cancer research, and increased public awareness on the dangers of tobacco has helped contribute towards half a million fewer lung cancer deaths in men in the past 40 years. But we’ve still got a long way to go.

With our increased investments in lung cancer research we’re reaching a turning point, and we hope it won’t be long before some of our landmark discoveries lead to further improvements in survival.

Should CAR T Cells Be Used Earlier in People with Non-Hodgkin...

“I feel extremely proud when I look at what we’ve achieved”: ScottishPower’s Andrew...