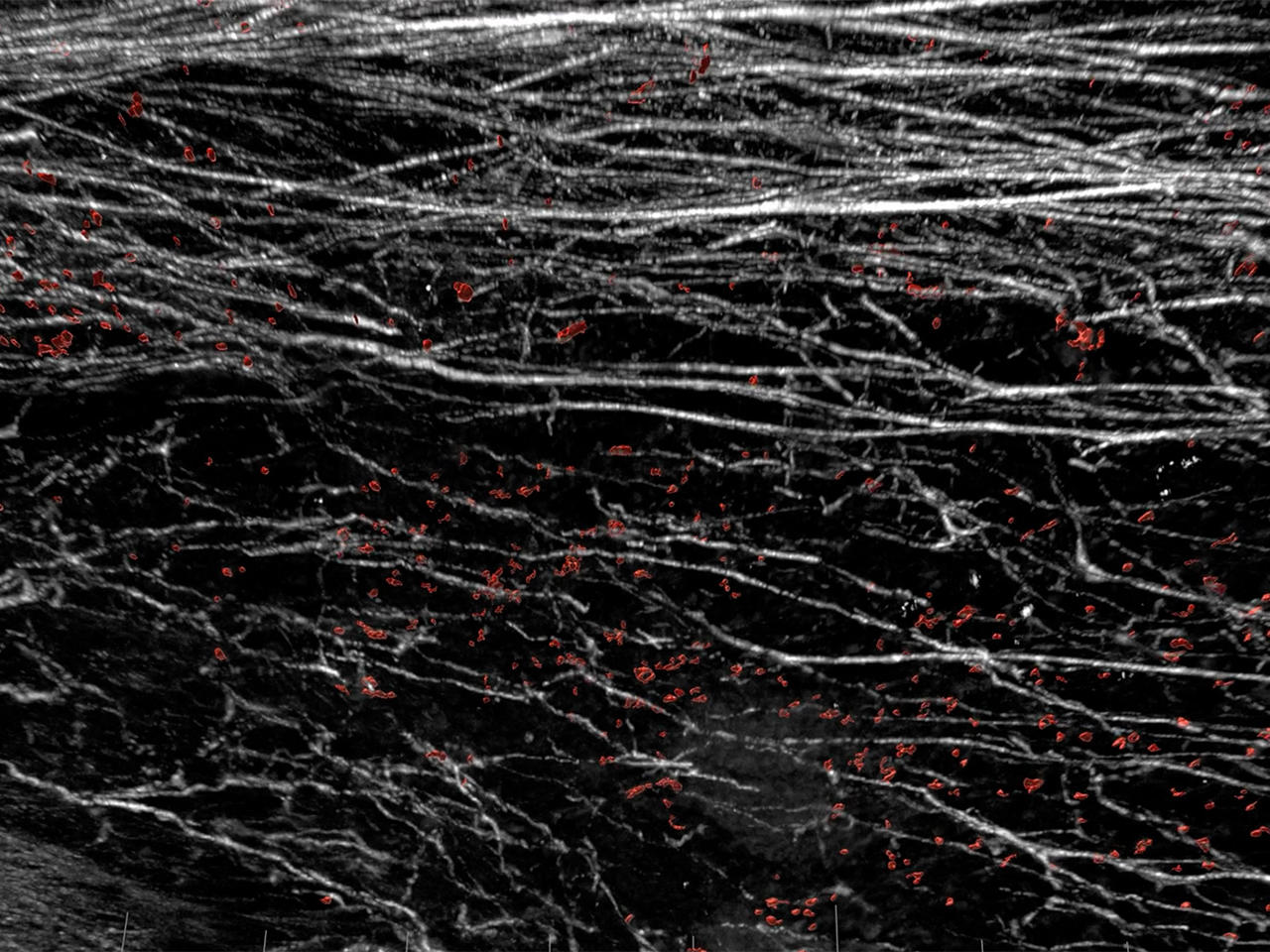 Scientists have identified a protein that may help prevent immune cells from entering breast tumors and killing the cancer cells. The research, which was conducted primarily in mice, could lead to potential strategies for overcoming barriers that keep certain immune cells from attacking tumors, according to the investigators.

The protein, DDR1, is a cell-growth protein that binds to collagen proteins, which have a fiber-like structure. Collagen proteins are a prominent part of structural support network for cells and tissues called the extracellular matrix.

The new findings show that, in mouse models of breast cancer, tumor cells released a segment of the DDR1 protein into the surrounding tumor microenvironment. Here, the molecule appears to orchestrate the alignment of collagen proteins into dense barriers that block immune cells from coming into tumors, the researchers reported in Nature on November 3.

“We have known that some cancers prevent immune cells such as T cells from infiltrating tumors, but the mechanisms have not always been clear,” said study co-leader Rong Li, Ph.D., of the George Washington University School of Medicine & Health Sciences. He studies the biology of triple-negative breast cancer, which is an aggressive form of the disease.

In the experiments, which used mouse models of triple-negative breast cancer, the researchers found evidence that DDR1 promotes the alignment of collagen fibers. The aligned fibers then form a barrier that keeps immune cells from penetrating into tumors.

The researchers also found that blocking portion of DDR1 shed into the extracellular matrix with an antibody drug disrupted the alignment of collagen fibers and slowed tumor growth. Mice treated with the antibodies also had greater numbers of immune cells in their tumors than untreated mice.

“In mice, the antibodies can increase the infiltration of immune cells into tumors,” said study co-leader Zhiqiang An, Ph.D., who directs the Texas Therapeutics Institute at the University of Texas Health Science Center at Houston and led the development of antibodies that bind to the shed portion of DDR1. The antibodies have been licensed to a company for development as a potential treatment, he noted.

More research is needed to determine whether targeting DDR1 could be a potential therapeutic strategy for triple-negative breast cancer, said Lillian Kuo, Ph.D., of NCI’s Division of Cancer Biology, who was not involved in the research.

But Dr. Kuo agreed with the investigators that targeting DDR1 could be a potential way to enable immune cells to enter the tumor microenvironment.

DDR1, which is a type of signaling protein called a receptor tyrosine kinase, is overproduced in some breast tumors, which suggests that it could be a potential target for treatment, the researchers explained.

When the portion of DDR1 that sits outside of the cell membrane binds to another specific protein, known as its ligand, the kinase portion inside the cell becomes activated and can fuel cell growth. Some cancer therapies, such as imatinib (Gleevec) and erlotinib (Tarceva), inhibit the activity of overly active tyrosine kinases.

The Roles of Collagen

“After more than 7 years of studying DDR1, we discovered that the shed extracellular domain can bind to collagen to form a protective barrier surrounding the tumor masses and prevent killer T-cells from infiltrating the tumor microenvironment,” said Dr. An.

In addition to the mouse studies, the researchers analyzed tissue samples from patients with breast cancer. The analysis revealed that higher levels of DDR1 in breast tumors were associated with fewer numbers of immune cells.

The research also highlighted the multiple roles of collagen. Although collagen can keep immune cells out of tumors, studies have also suggested that the loss of collagen can allow tumors to grow more rapidly.

He added, “Our approach is to disrupt the structure of collagen rather than reducing the amount of collagen in tumors.”

The researchers are planning to investigate whether DDR1 plays a similar immune cell-blocking role in other types of cancer. They also plan to search for other proteins that might be involved in building such protective barriers around tumors.

“This study shows that one should never give up on a project because the data do not match the initial hypothesis,” said Dr. An. “It is also a reminder that thinking outside of the box can lead to new discoveries.”

Signal of Increased Risk of Major Cardiovascular Events and Cancer with...

Green Beret With Lung Cancer Surprised With Hundreds Of ‘Thank You’...

Cancer in children and young people: how far we’ve come

Teen With Terminal Cancer Gives Make-A-Wish Gift To Other Kids In...