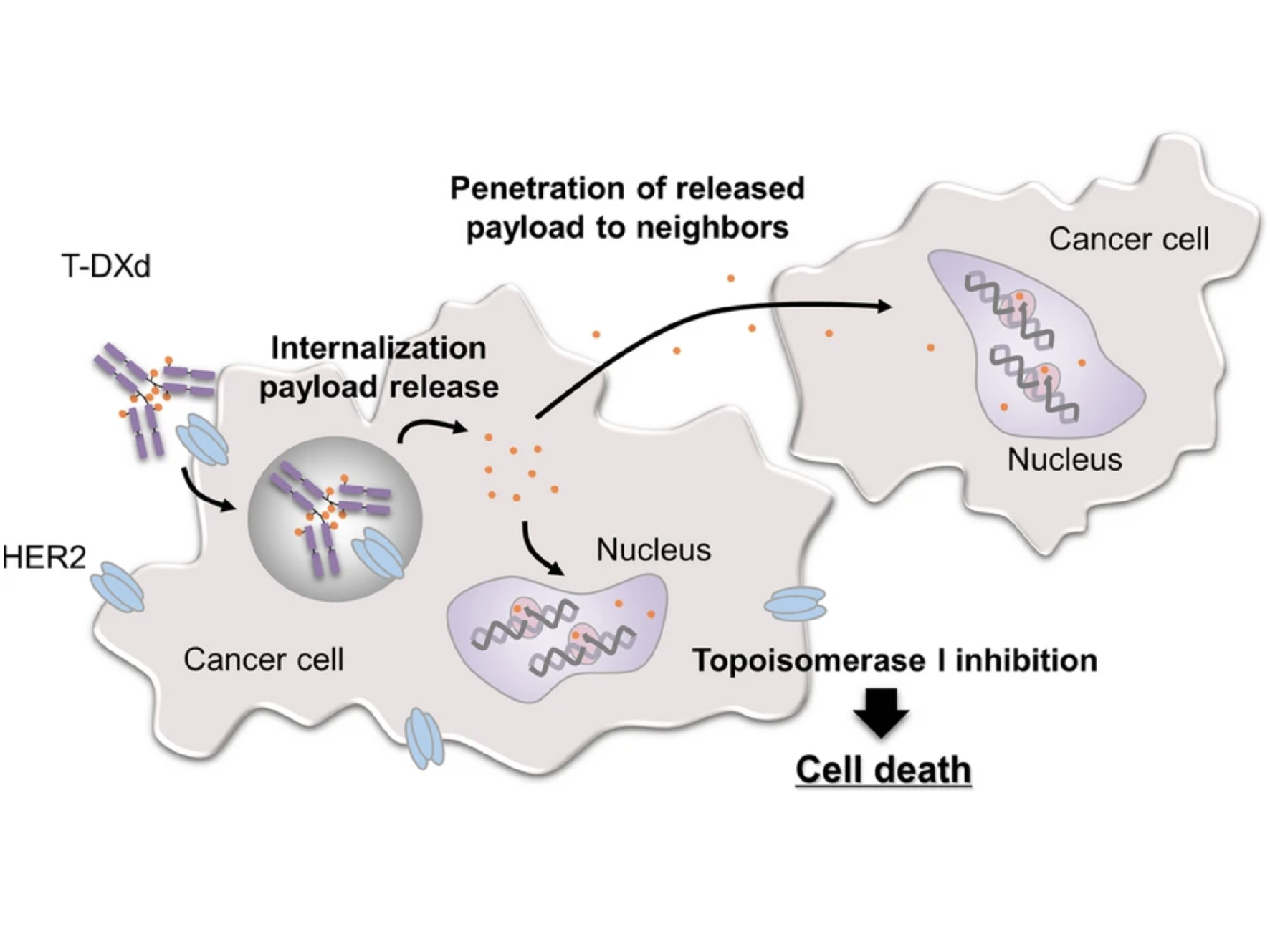 Interim results of the clinical trial, which compared the two drugs in people whose disease had progressed after treatment with at least one earlier regimen for metastatic breast cancer, were presented September 18 at the European Society for Medical Oncology (ESMO) Congress 2021. Although the trial is ongoing, a planned interim analysis of data from the study showed a clear difference between the two treatments.

Twelve months after treatment started, the cancer was still under control in nearly 76% of people in the trastuzumab deruxtecan, or T-DXd group, compared with 34% of those treated with T-DM1, said senior study investigator Sara Hurvitz, M.D., of the UCLA Jonsson Comprehensive Cancer Center.

The superior response to T-DXd was “very impressive” and suggests that this drug should be the new standard second-line treatment for such patients, said Alexandra Zimmer, M.D., clinical director of the Women’s Malignancies Branch in NCI’s Center for Cancer Research, who was not involved with the study.

“In my 15 years of experience as a breast cancer clinician, I’ve never seen such a marked improvement in efficacy with a new drug compared to the current standard therapy for metastatic breast cancer, so it really is quite exciting for our patients,” Dr. Hurvitz said.

In about 15%–20% of people with breast cancer, tumors overproduce HER2, with the excess HER2 on tumor cells driving the cancer’s growth. Such HER2-positive tumors tend to grow faster and are more likely to spread elsewhere in the body, or metastasize, than those that do not overproduce HER2.

Trastuzumab and other drugs called monoclonal antibodies that target HER2 have been quite successful as treatments for HER2-positive breast cancer. As a result, researchers have been developing new drugs based on these antibodies.

Both T-DM1 and T-DXd, which are given by infusion into a vein, are drugs known as antibody–drug conjugates (ADCs). Such drugs consist of a monoclonal antibody, in this case trastuzumab, chemically linked to a cell-killing chemotherapy drug.

The trastuzumab component of both T-DM1 and T-DXd acts as a homing device that helps the drug deliver its chemotherapy “payload” directly to tumor cells that overproduce HER2. The ADC is then ferried inside the cell, where the attached chemotherapy drug is released.

The new study, a large international clinical trial called DESTINY-Breast03, is the first to directly compare T-DXd with another treatment in people with breast cancer. The trial was funded by Daiichi Sankyo, Inc., and AstraZeneca, the developers of T-DXd.

Findings from a smaller clinical trial called DESTINY-Breast01, which were published last year, led the Food and Drug Administration to grant accelerated approval to T-DXd as a treatment for people with inoperable or metastatic HER2-positive breast cancer who had received at least two prior lines of HER2-targeted treatment.

Those results, which showed that tumors responded to T-DXd in about 60% of patients who had already received numerous prior treatments, “were already impressive,” Dr. Zimmer said. But that trial did not directly compare the drug with other treatments.

“We were waiting for T-DXd to be compared to another treatment in a large clinical trial like [DESTINY-Breast03],” Dr. Zimmer continued.

The DESTINY-Breast03 trial enrolled 524 people with HER2-positive breast cancer that could not be removed by surgery or had metastasized to other parts of the body, including the brain. Participants were randomly assigned to receive either T-DM1 or T-DXd. All had previously received treatment with trastuzumab (Herceptin) and a taxane-based chemotherapy drug.

Tumors shrank or disappeared completely on imaging tests in about 80% of patients who received T-DXd, compared with 34% who were treated with T-DM1.

The research team is continuing to follow participants to learn if there is a difference in how long people in the two treatment groups live overall. They will also compare participants’ quality of life in the two groups.

Serious treatment-related side effects occurred in about 45% of people in the T-DXd group and about 40% of those in the T-DM1 group, said Javier Cortés, M.D., Ph.D., of the International Breast Cancer Center in Barcelona, who presented the DESTINY-Breast03 findings at the ESMO meeting.

The main side effect that researchers were concerned about is a potentially serious type of lung inflammation. This condition, called interstitial lung disease, or ILD, caused five treatment-related deaths among the 184 participants in the earlier DESTINY-Breast01 study.

Because of this concern, participants in DESTINY-Breast03 were carefully monitored for signs of ILD, Dr. Hurvitz said. Although 10.5% of people in the T-DXd group developed ILD, compared with only 1.9% in the T-DM1 group, “in this much larger trial, no one in either treatment group died of ILD and no one had severe ILD. Only two patients in the T-DXd group had moderately severe ILD,” she continued.

Based on the new trial results, “I think we can put many of these concerns [about ILD] aside,” said Shanu Modi, M.D., who specializes in treating breast cancer at Memorial Sloan Kettering Cancer Center in New York and who discussed the findings at the meeting. However, “vigilance and early intervention is absolutely mandatory to deliver T-DXd safely,” continued Dr. Modi, who was not involved in DESTINY-Breast03 but was an investigator in DESTINY-Breast01.

People who develop signs of ILD must immediately stop taking the drug, may be given steroids to control lung inflammation, and may be monitored by a lung specialist until the issue has resolved, Dr. Hurvitz said.

However, she noted, “if a patient has shortness of breath or low oxygen levels due to ILD, the current recommendation is to permanently discontinue this drug.”

Several differences between T-DXd and T-DM1 could explain why T-DXd is more effective, Dr. Cortés said.

Perhaps most important, studies in mice and lab-grown cells indicate that once the chemotherapy component of T-DXd has been released, it can enter and kill neighboring cells, including tumor cells that do not overproduce HER2.

In HER2-positive breast cancer, not all cells within a tumor overproduce HER2, Dr. Modi explained. So this “bystander effect” of T-DXd, which has not been seen with T-DM1, is particularly important for treating this form of breast cancer, she said.

Numerous studies of T-DXd alone or combined with other drugs in people with breast cancer—as well as other cancer types that overproduce HER2, including lung and stomach cancer—are ongoing or planned or have recently concluded. For example, recent results from a small clinical trial showed that T-DXd shrank tumors in more than half of people with previously treated HER2-positive lung cancer.

“There is also a study looking at T-DXd in ‘HER2-low’ breast cancer, meaning it’s not a HER2-positive tumor but has a little bit of HER2 on the surface of tumor cells,” Dr. Hurvitz said. About two-thirds of hormone receptor–positive breast cancers and roughly a third of triple-negative breast cancers fall into this category, she noted.

In addition, Dr. Modi said, it remains to be seen whether T-DM1 or other treatments can stop disease progression in people with metastatic HER2-postive breast cancer whose disease eventually progresses on T-DXd.

Long-Term Survival in a Significant Proportion of Patients with a 1p/19q...

How to Spend Time with Friends and Family Now that COVID...

Coronavirus reports – Part 9: “I am very relieved but I...

Haematologic Toxicity Not Increased with Immunochemotherapy Combinations Over Chemotherapy Treatment for...

Hope and Challenge: The NCI Annual Plan and Budget Proposal for...