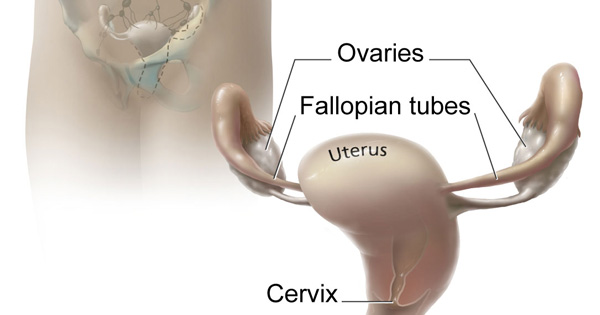 When women have surgery for advanced ovarian cancer, surgeons often will remove all the lymph nodes in the area around the tumor—even if they look and feel normal—because the lymph nodes might harbor cancer cells that have spread from the original tumor and may be resistant to subsequent chemotherapy. But the value of this surgical practice, known as systematic lymphadenectomy, has been debated for some time.

Now, results of a randomized clinical trial show that systematic lymphadenectomy did not improve survival in women with advanced ovarian cancer who had all visible signs of the cancer surgically removed and normal-looking lymph nodes.

Furthermore, the study found, systematic lymphadenectomy was associated with more frequent serious complications and a higher death rate within 60 days after surgery.

“This well-designed study highlights how we might be doing harm to the patient by removing lymph nodes that appear to be normal,” said Yovanni Casablanca, M.D., a gynecologic oncologist and surgeon at Walter Reed National Military Medical Center, who was not involved with the study. “As a surgeon, it’s going to change how I counsel some of my patients.”

Results of the trial were published February 28 in the New England Journal of Medicine.

A Longstanding Debate on Lymphadenectomy

Lymph nodes can be a sanctuary for tumor cells that have broken away from the main tumor. They are part of the lymph system, which may be a conduit for cancer cells to spread to other parts of the body.

Surgery followed by chemotherapy is the standard treatment for women with advanced ovarian cancer. The surgeon removes all visible tumor tissue in the abdomen and pelvis. If a patient has lymph nodes in the area around the cancer that look enlarged or otherwise abnormal, the surgeon will remove those, too.

“It was thought that if the cancer has spread throughout the abdomen, then it may have spread to all the lymph nodes as well,” explained Christina Annunziata, M.D., Ph.D., of the Women’s Malignancies Branch in NCI’s Center for Cancer Research, who was not involved with the study. That includes lymph nodes around the tumor and in the upper abdomen “that are not visibly enlarged but might harbor microscopic or invisible disease,” she said.

What has been unclear is whether removing those normal-looking lymph nodes leads to better outcomes for patients or if post-surgery chemotherapy will take care of any microscopic disease lurking in those lymph nodes, Dr. Annunziata said.

“The value of this lymph node procedure in patients with advanced ovarian cancer has been debated for several decades,” said lead study author Philipp Harter, M.D., Ph.D., of the Department of Gynecology and Gynecologic Oncology at Kliniken Essen-Mitte in Germany.

In many hospitals, Dr. Harter said, systematic lymphadenectomy, which involves removing about 60 to 100 lymph nodes, has been a standard procedure during surgery for these patients, despite the lack of rigorous evidence supporting its use.

For the trial, dubbed LION, Dr. Harter and his colleagues enrolled 650 women newly diagnosed with advanced epithelial ovarian cancer (cancer that has spread beyond the ovaries, fallopian tubes, and uterus) that had been classified as stage IIB through IV ovarian cancer.

To be included in the trial, women had to have undergone successful surgical removal of all visible signs of cancer in the abdomen and peritoneum, the tissue that lines the abdominal wall and covers most organs in the abdomen. In addition, patients could not have any abnormal-looking lymph nodes in the area around the tumor, and they had to be in good physical condition after the tumor tissue had been removed.

Once the surgical team had confirmed that these criteria for inclusion had been met, eligible patients were then randomly assigned while still in surgery to undergo or not undergo systematic lymphadenectomy.

This part of the trial design was important because, in previous studies, it was hard to tell whether lymphadenectomy had an independent effect on patient survival or whether effects of this procedure on survival reflect that it was usually done as part of more comprehensive surgery to remove all visible tumor tissue, wrote Eric Eisenhauer, M.D., of Massachusetts General Hospital, and Dennis Chi, M.D., of Memorial Sloan Kettering Cancer Center, in an accompanying editorial.

Another important aspect of the trial design, Dr. Harter said, was that hospitals had to undergo a qualification process that assessed their skill in performing complete lymphadenectomy before they were allowed to participate in the trial. All 52 participating centers in the trial were in Europe.

“We showed that patients successfully surgically treated in such dedicated centers have a relatively favorable prognosis,” Dr. Harter said.

Median progression-free survival, which was the length of time from random assignment until the disease came back or death, was 25.5 months in both groups.

When pathologists examined lymph nodes removed from women in the lymphadenectomy group, they found microscopic metastatic cancer in nearly 56% of these patients.

The similar overall survival in the two groups in this trial suggests that it is the inability to control disease in the abdomen that is the most frequent cause of ovarian cancer–related illness and death, rather than any residual disease in the lymph nodes, Drs. Eisenhauer and Chi said in the editorial.

One important conclusion from the study, she said, is that “more harm results by removing more lymph nodes and having the surgery take longer.”

The “novel trial design resolved the criticisms of many previous studies” that tried to assess the value of systematic lymphadenectomy in women with advanced ovarian cancer who have had all visible signs of tumor tissue surgically removed, the authors of the editorial wrote.

In addition to improving outcomes for those patients, they conclude, “we may also have learned a bit [from the LION trial] about how difficult it can be to overcome our assumptions without a properly controlled trial design.”

Over 600 people in England set to benefit from innovative lung...

In the Name of Pinkness