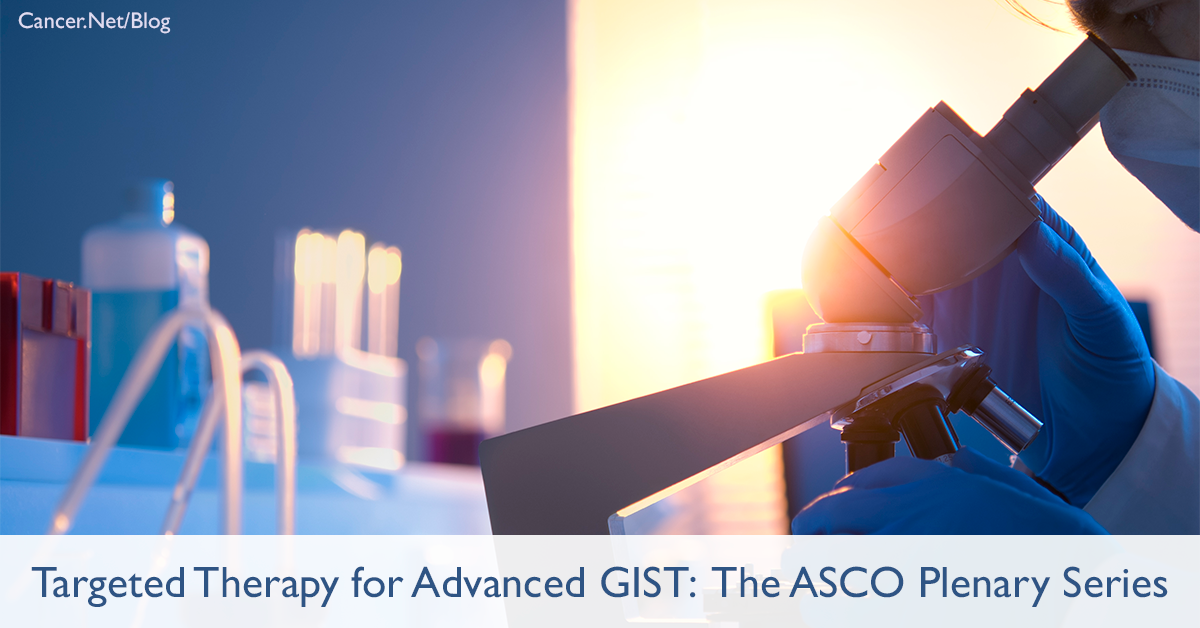 The January 2022 session in the ASCO Plenary Series features a study on the treatment of advanced gastrointestinal stromal tumors (GISTs).

Who does this study affect: People with advanced GIST who cannot continue taking imatinib (Gleevec).

What did this study find: A GIST is a specific type of tumor that forms in the gastrointestinal tract, which is the body’s system for digesting food. GISTs are part of a group of cancers called sarcomas, which begin in tissues that support and connect the body. There were an estimated 4,000 to 6,000 people diagnosed with a GIST in the United States in 2021.

The targeted therapy drug imatinib is often the first drug used to treat people with GIST, also called first-line treatment. But for people with advanced GIST whose tumor has not been stopped by imatinib or who cannot continue taking the drug, often because of side effects, different treatment is needed. When this is the case, it is called second-line treatment. The current second-line standard of care treatment for advanced GIST is sunitinib (Sutent), which is a drug that targets the KIT gene and stops blood vessel growth in tumors. If sunitinib no longer works to treat the GIST, then other targeted therapies, including ripretinib (Qinlock), may be used.

The phase III INTRIGUE clinical trial was an international study designed to test whether ripretinib was more effective at treating advanced GISTs than sunitinib after imatinib could no longer be used.

This study included 453 people with an advanced GIST who needed second-line treatment. The participants were randomly assigned to receive treatment with either ripretinib (226 people) or sunitinib (227 people). About 80% of GISTs have a mutation in the KIT gene. One of the most common KIT mutations in GISTs is called KIT exon 11. Of all participants, 327 had a KIT exon 11 mutation. Because both sunitinib and ripretinib target the KIT gene, the researchers also evenly divided participants with an exon 11 mutation among the 2 study groups.

What does this mean for patients: While ripretinib is not better than sunitinib in controlling advanced GIST after imatinib, it does appear to offer similar effectiveness to sunitinib and cause fewer serious side effects than sunitinib.

“Even though the INTRIGUE study did not meet its primary endpoint of improved PFS, ripretinib and sunitinib efficacy appeared comparable. Although ripretinib was not superior to sunitinib as a second-line treatment for GIST, ripretinib has remarkable activity as a fourth-line or later agent and remains the only FDA-approved agent in this setting.”

What to Do When You Are Diagnosed With Cancer During Pregnancy

Facing Crisis After Crisis During Cancer: How to Cope

ALK Mutations and Amplifications are Independent Predictors of Poorer Survival in...

Pazopanib Is Not Inferior to Doxorubicin in First-Line Treatment of Elderly...