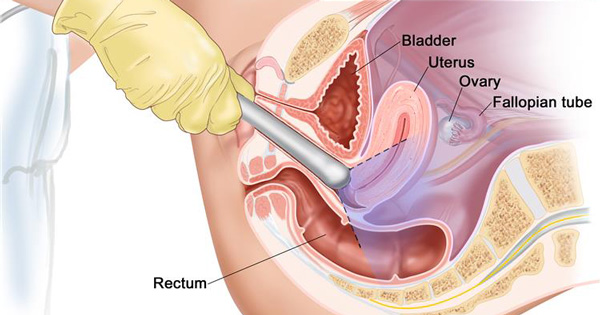 Unlike many other cancer types, the rate of endometrial cancer has increased in recent years and is expected to continue rising worldwide over the coming decade. This rise is thought to be largely due to factors that affect hormones, such as rising obesity rates and changes in how many children women are likely to have.

In most cancers, by the time a person develops symptoms, their disease is usually advanced and harder to treat, explained Megan Clarke, Ph.D., of NCI’s Division of Cancer Epidemiology and Genetics (DCEG), who led the analysis. “With endometrial cancer it’s quite different, and [recognizing symptoms] gives us an opportunity to intervene” and improve the odds of long-term survival, she added.

Typically, postmenopausal women who experience bleeding are referred for further testing to either rule out or diagnose endometrial cancer. While vaginal bleeding has been known to be a symptom of endometrial cancer, this large study confirms the practice of referring women for further testing, explained Christina Chu, M.D., of Fox Chase Cancer Center, who was not involved with the research.

“If you have bleeding after menopause, you should call your doctor and let them know,” said Dr. Chu. “For the majority of women, it’s a benign problem, but there are simple things that can be done to rule out endometrial cancer.”

To get a comprehensive picture of the relationship between endometrial cancer and postmenopausal vaginal bleeding, researchers led by DCEG’s Dr. Clarke and Nicolas Wentzensen, M.D., Ph.D., performed a meta-analysis of 129 studies, which included more than 40,000 women. Data for the studies—which were conducted in Europe, North America, and Asia—were collected between 1977 and 2017.

Overall, the analysis showed that, consistent with what had been seen in earlier studies, 90% of women diagnosed with endometrial cancer had experienced postmenopausal bleeding.

The number of women with postmenopausal bleeding who were diagnosed with endometrial cancer varied around the globe. While the rate was 9% overall, it ranged from 5% in North America to 13% in Western Europe.

“It’s only if there’s persistent bleeding after the initial 6 months of [hormone replacement] that it may be more concerning” and should trigger testing for endometrial cancer, she said.

Although people tend to think of biopsies as invasive and frightening, an endometrial biopsy is a simple procedure similar to a Pap smear, Dr. Chu explained. Like a Pap smear, it can be done in the doctor’s office and doesn’t require anesthesia.

In their study, the researchers ran simulations in which they estimated how many women with postmenopausal bleeding would need to undergo additional testing to detect one case of endometrial cancer, based on varied levels of risk and different testing strategies. Assuming a 10% risk of endometrial cancer (similar to that observed in the meta-analysis) and that women underwent subsequent testing with ultrasound, they estimated that 7 women would need to have a biopsy to find 1 cancer.

Before sending a woman for testing, doctors should ask themselves: “If she has postmenopausal bleeding, how high is her risk of cancer?” explained Dr. Wentzensen. “Our estimate of 10% supports the current practice of further evaluating these women.”

The findings confirm that “postmenopausal women with [vaginal] bleeding have a low risk of endometrial cancer, but the vast majority of women with endometrial cancer present with bleeding. It’s just a way to think about it from two different directions,” explained Dr. Chu.

Although they don’t want to alarm anyone with these results, added Dr. Clarke, women should know that getting tested if they have postmenopausal bleeding “gives us an opportunity to [potentially] detect endometrial cancer early, which provides a high likelihood of cure.”

The DCEG team is currently performing another study in collaboration with the Mayo Clinic, looking prospectively at the number of diagnoses of endometrial cancer in women with postmenopausal bleeding. They also hope to use data from the study to identify molecular markers of risk and build better models that could more accurately determine which women need to be tested.

With these disparities and the increasing incidence of the disease, “it’s a growing problem, but increased awareness and better early detection may improve endometrial cancer mortality going forward,” concluded Dr. Wentzensen.

Georgia Middle Schooler Donates All the Proceeds of Her Grand Champion...

Should People With Cancer Be Tested for Hepatitis B?

Nivolumab Does Not Prolong Overall Survival Compared with Sorafenib In First-Line...