The 2022 Gastrointestinal Cancers Symposium of the American Society of Clinical Oncology will be held in person and online on January 20 to 22, 2022, in San Francisco, California. This meeting draws together experts from around the world to discuss new ways of treating cancers that affect the body’s gastrointestinal tract, which is the bodily system involved in swallowing and digesting food, absorbing nutrients, and removing waste from the body.

You can learn more about research from this symposium by following the #GI22 hashtag on social media.

Who does this study affect: People with advanced liver cancer that is unresectable, which means it cannot be removed with surgery.

What did this study find: Results from an international phase III clinical trial called HIMALAYA showed that a combination of immunotherapy drugs, durvalumab (Imfinzi) and tremelimumab, helped people with unresectable advanced hepatocellular carcinoma live longer. Immunotherapy is a type of cancer treatment that uses the body’s natural defenses to fight cancer by improving your immune system’s ability to attack cancer cells. Durvalumab targets the PD-1 protein, and tremelimumab targets CTLA-4.

This study included 1,171 people with stage III or stage IV HCC that could not be removed by surgery. This was a global study that included people from 15 countries, including the United States and Canada and countries in Europe, South America, and Asia. The participants were divided into 3 study groups. The first group received a regimen called STRIDE, which included a combination of tremelimumab plus durvalumab followed by durvalumab alone. The second group received durvalumab alone. The third group received a targeted therapy medication called sorafenib (Nexavar), which is one of the current standard of care treatments for advanced HCC. The main goal of this study was to find out if STRIDE helped people live longer than sorafenib.

The researchers also studied the overall response rate, or ORR, of the treatments used in this study. The ORR shows the percentage of people who had the cancer stop growing or shrink in response to the treatment. In this study, the ORR for STRIDE was 20%, compared with 17% for durvalumab and 5% for sorafenib.

STRIDE caused serious side effects (grade 3 or higher) in nearly 26% of the participants, compared with 13% for durvalumab and 37% for sorafenib. The most common side effects were skin problems, increased results on blood tests that measure liver function, and increased levels of enzymes called amylase and lipase that help with the digestion of food.

What does this mean for patients: The immunotherapy combination of tremelimumab and durvalumab helped people with advanced HCC live longer when surgery is not an option.

“We plan on taking a deeper dive into outcomes based on causes for the disease, such as viral infection, as well as which regions of the liver are impacted.”

Who does this study affect: People with advanced biliary tract cancer, which includes bile duct cancer and gallbladder cancer, that cannot be removed by surgery

What did this study find: Results from a global phase III clinical trial called TOPAZ-1 showed that combining the immunotherapy drug durvalumab (Imfinzi) with the chemotherapy drugs gemcitabine (Gemzar) and cisplatin (available as a generic drug) helped people with advanced biliary tract cancer live longer. Immunotherapy is a type of cancer treatment that uses the body’s natural defenses to fight cancer by improving your immune system’s ability to attack cancer cells.

The biliary tract includes the bile ducts inside and outside the liver and the gallbladder, which is an organ that holds bile until food enters the small intestine. Bile is a fluid made by the liver that helps digest fat. In 2021, biliary tract cancer was estimated to be diagnosed in nearly 12,000 people and cause over 4,300 deaths in the United States. Bile duct cancer, or cholangiocarcinoma, can arise in the bile ducts inside the liver, called intrahepatic, and outside the liver, called extrahepatic. Gallbladder cancer begins in the gallbladder. There are limited treatment options for advanced biliary tract cancer. 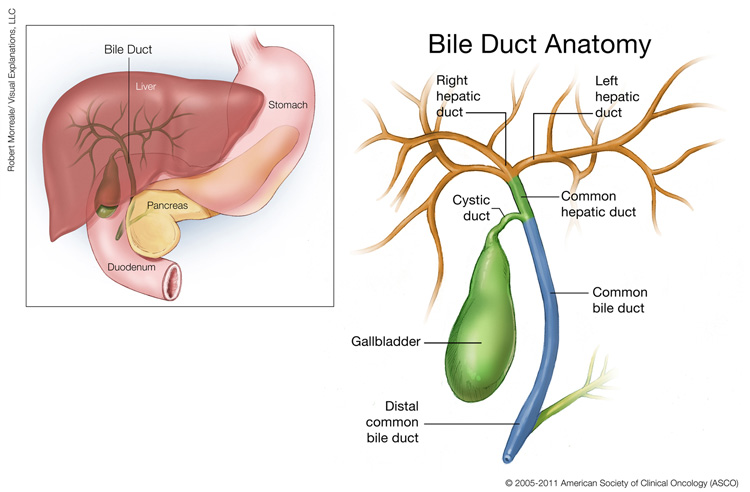 This study included 685 people with locally advanced, recurrent, or metastatic biliary tract cancer who had not yet received any cancer treatment and who could not receive surgery. The participants were from 15 countries, with nearly 55% in Asian countries. Most of the participants were Asian (56%) or white (37%), and about half were women. Nearly 3 of every 4 participants had bile duct cancer. The participants were evenly divided into 2 groups. The first group received durvalumab combined with the standard of care chemotherapy regimen of cisplatin (available as a generic drug) plus gemcitabine (Gemzar) for up to 24 weeks and then durvalumab alone until the cancer began to grow again or the participant stopped receiving treatment. The second group received the same chemotherapy regimen of cisplatin plus gemcitabine for up to 24 weeks but with a placebo, and then the placebo alone until the cancer began growing again or the participant stopped receiving treatment.

The researchers also studied the overall response rate, or ORR, of the treatments used in this study. The ORR shows the percentage of people who had the cancer stop growing or shrink in response to the treatment. In this study, the ORR for durvalumab was about 27%, compared with nearly 19% for the placebo.

What does this mean for patients: Adding durvalumab to standard chemotherapy may help people with advanced biliary tract cancer who cannot receive surgery live longer.

“TOPAZ-1 is the first phase III trial to show that adding an immunotherapy to standard chemotherapy can increase survival in biliary tract cancer and, importantly, does so without inducing any new serious side effects.”

Grace and Love for Full Hands

Strangers Buy Boy Stuffed Animals For His Birthday When His Mom...

Association of BRCA1 and BRCA2 Pathogenic Variants with Increased Risk of...