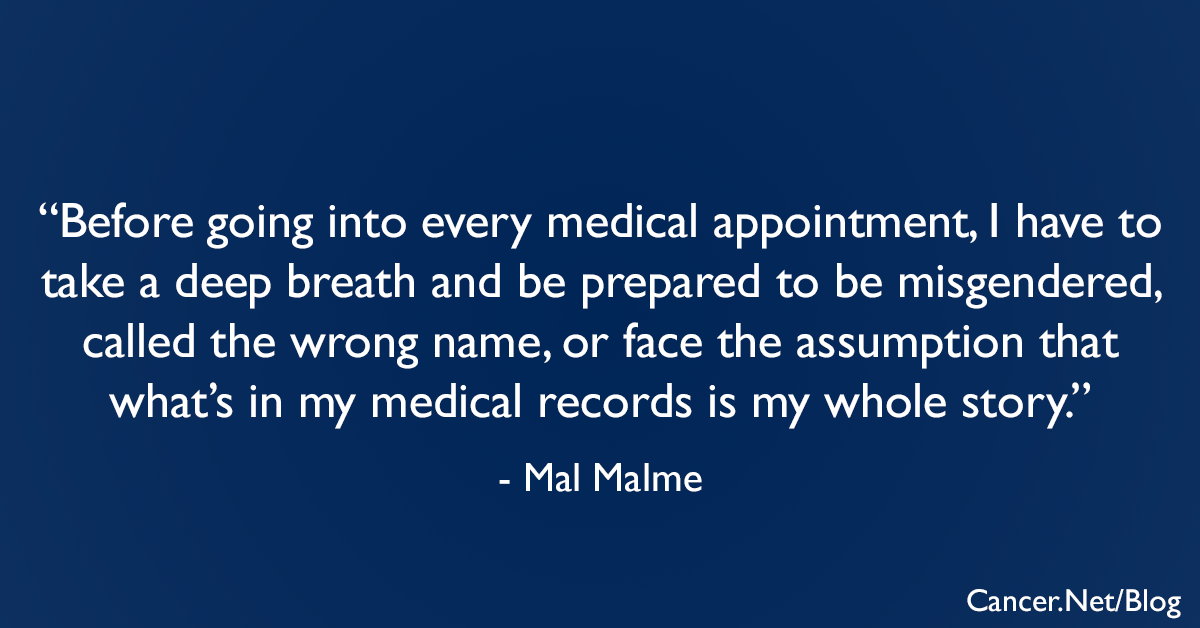 Mal Malme (Mal or they/them) is a proud Boston-based theater artist, activist, writer, and health care clown. Mal is co-founder of Queer Soup Theater and is currently touring The Pineapple Project, a play for kids that celebrates gender creativity. Mal currently serves on the board of StageSource, New England’s theater resources and advocacy organization. By day, Mal is Dr. Mal Adjusted with The Laughter League at Boston Children’s and Hasbro Children’s Hospitals. Mal also serves as a patient and family advisor at Beth Israel Deaconess Medical Center (BIDMC), where Mal received cancer treatment. Mal also loves dogs and volunteers at the Animal Rescue League of Boston.

Cancer and its treatment can be very isolating, and navigating the health care system can add even more stress onto people with cancer. Being someone who identifies as transgender or outside of the binary, especially in the health care system, can further add to that feeling of isolation and the feeling of not being seen for who you are. Oftentimes, you may even feel like you have to educate the medical staff who are supposed to be taking care of you.

Since my cancer treatment, I have changed pronouns and have affirmed my identity as non-binary. However, that term wasn’t used 10 years ago when I was going through treatment; at the time, I used the term “genderqueer.” When I started with my surgeries and treatment for cancer, I wish I had been more outspoken about how I identified and had direct conversations with my medical team so that we could move forward on the same page. Because I had ovarian cancer, there was an assumption that I identified as a woman. And my care, even though it was excellent, could’ve been more tailored to me as a gender non-conforming person.

Today, the entire health care system is still very heteronormative and binary. And although some institutions are moving toward inclusion, it is slow and not without bumps in the road. Before going into every medical appointment, I have to take a deep breath and be prepared to be misgendered, called the wrong name, or face the assumption that what’s in my medical records is my whole story. If you add that on top of my ongoing cancer screenings, during which I’m holding worries around recurrence, that is a lot to manage emotionally. I want to be seen for the entirety of who I am, not just what’s on my chart.

I’m grateful for my team of doctors and their staff who have been with me since the beginning of this whole dance with cancer, and for the most part, they have taken really good care of me. Now, I can use my voice and share my story to ensure that the health care system does better and gets better at welcoming and including LGBTQ+ people with cancer, their families, and all humans.

The most challenging experiences for me throughout survivorship have been at annual mammograms. I have had to advocate to be seen almost every year.

The typical experience is this: I arrive. I am called by my legal name, after I’ve asked to be called Mal (and have asked the hospital to create a window in the computer program to put in my preferred name, which is just now beginning to happen). I am handed a pink gown. Every year, I have provided feedback to the radiology department to offer other options. This year, as I was once again handed the pink gown, I had to ask for a different option. I still have to go into the women’s changing and waiting area. And when the technician calls my name, again, I usually have to tell them to call me Mal. I have spent moments trying to steel myself in the changing room before and after the procedure so I don’t cry, but I have broken into tears on several occasions.

Mammograms are no fun for anyone, as they can feel impersonal and cold. But as a non-binary person who struggles with this part of my body a great deal, this particular procedure is very challenging to get through. And to add on top of that, having to advocate every year to not get a pink gown, to be called by my name, and to not wait in an area that doesn’t have space for me just adds much more emotional weight, especially after consistently providing feedback about these issues and feeling as if it goes into a void.

There was only 1 year that I went to this same hospital, had a white gown offered to me, and was called by my name, Mal. The technician made extra efforts to check in with me because I was on the Patient Family Advisory Council at the hospital, and my supervisor had called ahead on my behalf to make the arrangements. While I so appreciated this, I know that others without that privilege would be challenged by the usual experience of not being seen. Every single person should be treated as an individual with respect and dignity for their humanity. No special favors should have to be called in. It should be the human experience at a hospital to be seen and heard and taken care of, every time.

How I talk to health care providers about my identity

As someone with a cancer history who has to be seen by different specialists several times a year, in addition to my primary care provider, that means I have to have many conversations around my identity. It takes inner strength and awareness to advocate for these conversations and to be heard so that during the next appointment, there is more understanding between me and my health care team. My hope is that they will educate themselves around these issues as they pertain to my health care so that the burden isn’t always on me to have to advocate to be seen and heard each time. We can build this awareness together, so long as there is commitment on both sides.

One area that needs improvement within the health care system is patient notes and medical records. Although many of my doctors affirm my identity in person, when I look at their notes after an appointment, I am still misgendered. This shows that there is more conversation and changes needed to bring respect and dignity to each individual in those areas.

Being seen and heard for who I am has been a slow process in which I have had to speak up more than once, at some appointments more than others. But I do have good relationships with most of my physicians and their teams, and in this moment, the burden is lifting. We have a ways to go, but we are moving in the right direction.

I am fortunate to live in a city where there is more access to good health care, and change is happening at the medical centers where I go for appointments. But large medical institutions around the United States have complicated systems that can slow the pace of progress. Sometimes, there may be operational changes that happen, but within the culture of the institution, those changes aren’t quite reflected yet. This may be because training staff takes time, and different departments may have their own systems in place that require further discussion on implementation.

But I have now started to see online registration forms updated to include other gender identities. Some institutions do this better than others. For example, institutions may include different options for those of us who identify as transgender or non-binary. Sometimes, the option beyond male/female is just “other,” which is dehumanizing. But including options like transgender, non-binary, and genderfluid is encouraging and helps me feel that an institution is progressing toward more inclusion of care for humans like me.

Today, more medical institutions also have LGBTQ+ affinity groups within them, which are spaces for learning that can be a resource for advocacy. There are also a lot more online communities available to LGBTQ+ people with cancer. More research is being done now to have a greater understanding of how to care for transgender and non-binary people with dignity, respect, and humanity, though I would encourage even more research studies to be done. Right now, we are playing catch-up. There is a lack of research and resources around caring for transgender and non-binary people with cancer. We need more institutions to take the initiative and educate themselves so we can change the health care system to see all of us.

I have found affinity spaces to be the most helpful in providing a sense of belonging and comfort during survivorship. These are spaces where I can just express my worries and frustrations as a queer, non-binary cancer survivor without having the burden of having to explain those perspectives. They’re also where I can contribute to being a support to other members in the group. We all understand the extra layer we may need to push through to be seen and heard and to feel like we can trust those who are supposed to be taking care of us and our health. I also belong to a private Facebook group called QueerCancer. If people who identify as LGBTQ+ need support around their cancer, it’s a wonderful, supportive group. I’m just me, and people get it.

Finally, I’m so fortunate to have an amazing spouse who loves me—all of me. My spouse has been on this journey with me and knows if I’m feeling really vulnerable and tired of having to advocate in that particular moment; she’s there and will jump in. Going through cancer can be so isolating, so having a person—whether it’s a partner, a good friend who’s family, or a cancer buddy or group to vent with—is so important.

Cancer survivorship can be difficult. But being acknowledged as a whole person by my medical team instead of just a cancer diagnosis helps me focus my energy on healing, and that’s where it needs to be.

What the Reignited Cancer Moonshot Initiative Means for People With Cancer

Can Eating Soy Cause Breast Cancer?