Researchers have developed tiny “drug factories” that can be implanted near tumors in the abdominal cavity to fight cancer, a new study in mice shows. The drug factories, which produce an immune-boosting molecule called interleukin-2 (IL-2), eliminated tumors in mouse models of ovarian and colorectal cancer.

Clinical testing of this approach in people with ovarian cancer is expected to start later this year, said the study’s senior investigator, Omid Veiseh, Ph.D., a bioengineer at Rice University.

IL-2, a type of molecule known as a cytokine, “is a known potent activator of T cells—the fighter cells of the immune system—and boosts their normal ability to eliminate cancer cells,” said Amanda Nash, the study’s lead researcher and a graduate student in Dr. Veiseh’s lab.

Indeed, a laboratory-made form of IL-2 (Proleukin) was the first immunotherapy approved to treat cancer, in 1992. But its use in patients has been limited by the severe side effects that occur when the drug is given intravenously and reaches the entire body.

By contrast, the implanted drug factories delivered high levels of IL-2 where it was needed, near the tumors, while keeping blood levels of IL-2 low in the experimental mice, the research team reported March 2 in Science Advances.

“This study offers one approach to providing IL-2 in a way that limits its toxicity and maximizes its cancer-fighting effects,” said James Gulley, M.D., Ph.D., a cancer immunotherapy expert in NCI’s Center for Cancer Research, who was not involved in the new study. “But clinical trials will be needed to test the safety and effectiveness of this approach in patients.”

To create the drug factories, Dr. Veiseh’s team began with human retinal cells grown in the lab. Among other features, these cells are relatively easy to manipulate genetically. The team engineered these cells to produce the natural form of IL-2. Each “factory” is a pinhead-sized bead of roughly 20,000–30,000 cells enclosed in a protective gel-like material called alginate.

The researchers implanted the beads in the peritoneal cavity—the space that encloses the abdominal and pelvic organs—of mice. They were able to control the dose of IL-2 by varying the number of beads that were implanted. Levels of the cytokine in the peritoneal cavity were at least 100 times higher than those in the blood, they found, confirming that the IL-2 delivered by the factories remained local.

The beads “pump out the drug daily for about 15 to 30 days, and then they shut off. And if needed, we can safely readminister more beads,” Dr. Veiseh said.

Mice with ovarian cancer that were implanted with IL-2–producing beads also survived longer than both untreated mice and mice treated with lab-made IL-2 that was directly infused into the peritoneal cavity.

Additional mouse experiments showed that the ability of the beads to shrink or eliminate tumors largely reflected the activation and increased number of tumor-targeting immune cells called killer T cells. Like normal IL-2, the factories also increased the numbers of other immune cells, including natural killer cells, that work hand in hand with killer T cells to destroy cancer cells, Dr. Gulley noted. 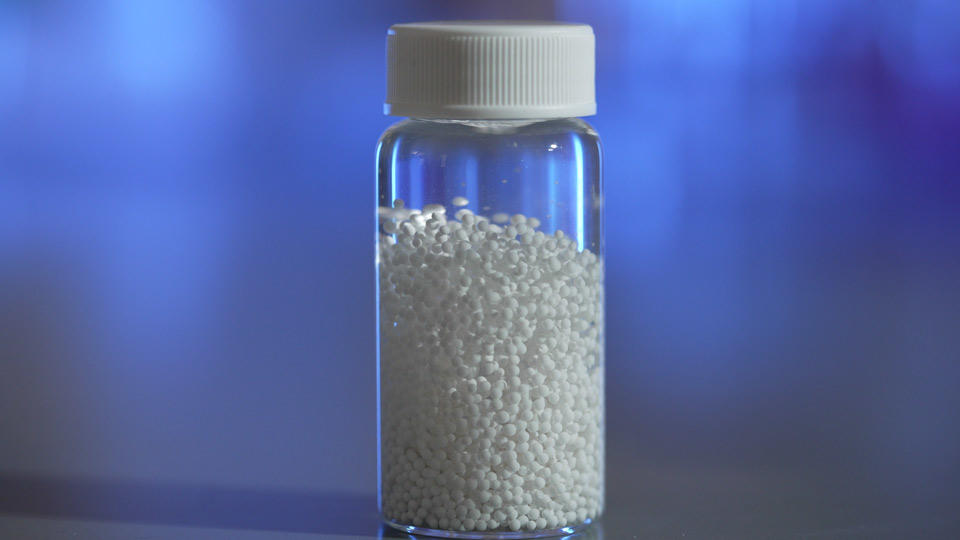 Each of the “drug factory” beads is composed of roughly 20,000–30,000 cells enclosed in a protective gel-like material.

In addition to allowing high levels of IL-2 to be delivered locally, another potential advantage of the implantable beads, Dr. Veiseh said, is that—unlike the lab-made form of IL-2—they don’t trigger the formation of antibodies that can attack and neutralize the cytokine. And that should make it safe to give repeated doses.

Although the alginate enclosing the beads is safe for human use, it is seen as foreign by the immune system and appears to intensify the immune response against tumors, Ms. Nash said.

“We believe that if you give IL-2 locally just by itself, without alginate, the immune response won’t be substantial enough to fully eradicate tumors in the intraperitoneal space,” she continued.

Drug factories lead to distant as well as local effects

Using the mouse model of aggressive colorectal cancer, the team found that implanting IL-2–producing beads in the peritoneal cavity not only eliminated the original tumor but also prevented new tumors of the same type from forming elsewhere in the body, suggesting that the beads could potentially also stop cancers from spreading, or metastasizing.

These effects on far-flung tumors were due to memory T cells—immune cells that remain in the body for a long time and can help keep the cancer from spreading to other parts of the body or coming back after initial treatment.

“When IL-2 stimulates T cells to fight the cancer cells, the memory T cells learn what that specific tumor looks like. So, if the cancer returns, these cells already know how to get rid of the tumor,” Ms. Nash explained.

“That’s how we believe and hope our approach will work in patients, but [ultimately] we will have to run clinical trials to test that,” Dr. Veiseh noted. He said that such effects on distant tumors could potentially allow the beads to be used to treat cancers that aren’t confined to the peritoneal space, such as lung cancer and mesothelioma.

Dr. Veiseh is the cofounder of a company, Avenge Bio, formed to commercialize the drug factory technology. He and Ms. Nash have a financial interest in the company. The company hopes to launch the first clinical trial of the technology, for people with ovarian cancer, later this year, and another trial for people with lung cancer and mesothelioma in 2023.

In preparation for the trials, the team also showed that implanted beads producing the human version of IL-2 appeared to be safe and well tolerated in nonhuman primates.

Although the ability to place the beads locally avoids the problems associated with systemic delivery of IL-2, Dr. Gulley noted that placing them would involve at least minor surgery.

Dr. Veiseh said that existing imaging-guided methods could be used to inject the beads through a surgically implanted narrow tube. “We hope that the benefits are so substantial that it is worth this additional complication,” he added.

Other researchers have developed different ways of delivering IL-2 and other cytokines directly to tumors to minimize side effects, Dr. Gulley noted, such as linking the cytokine to a tumor-targeting antibody.

It’s unclear which of these approaches will be safest and most effective against different cancers, Dr. Gulley said. “We will need to test multiple parallel approaches in clinical trials to find out.”

Not limited to delivering IL-2

A benefit of the drug factory technology is its versatility, Dr. Veiseh explained.

“The factory design itself can be leveraged to produce other cytokines that have shown clinical benefit against cancer, and we hope to use our platform to deliver those cytokines directly to tumors as well,” Dr. Veiseh said.

Ultimately, Dr. Gulley said, it may be possible to get better results in some patients by combining cytokines with other types of immunotherapy, including drugs called immune checkpoint inhibitors that can help T cells kill cancer cells better.

For example, he explained, Center for Cancer Research investigators are currently leading three trials in people with cancers that are not considered to be responsive to immunotherapy, including prostate and colorectal cancer, that are testing combinations of cytokines and other immunotherapies. “And we are seeing good levels of response,” he said.

However, Dr. Gulley continued, “we’re first going to need to see data on the safety of this [drug factory] approach alone. And then, potentially, combination approaches could be tested.”

Coronavirus reports – Part 9: “I am very relieved but I...

Teen Helps Mom With Cancer Shave Her Head, Then Turns To...

EMA Recommends Granting a Marketing Authorisation for Melphalan Flufenamide for the...