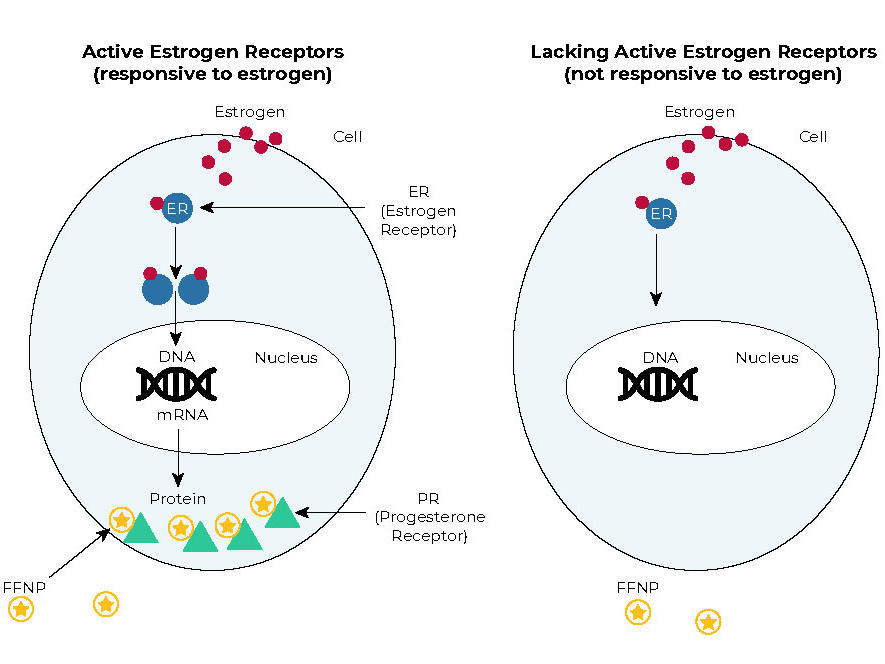 A new imaging test could help guide treatment decisions for some people with advanced breast cancer, results of a small NCI-funded clinical study suggest. The test is designed to identify tumors that should respond to hormone-blocking therapies like tamoxifen (Nolvadex) or letrozole (Femara), the study showed.

The imaging approach is for people whose breast cancer is estrogen-receptor (ER) positive, which means that their tumor cells contain an abundance of receptors for the hormone estrogen and the growth of these cancers is fueled by estrogen. About 70%–80% of breast cancers in women and 90% in men are ER positive.

Hormone therapies are a mainstay of treatment for ER-positive breast cancer. Also known as endocrine therapies, these drugs slow or stop tumor growth either by starving the tumors of estrogen or blocking estrogen from attaching, or binding, to the receptor.

But not everyone with ER-positive tumors will respond to hormone therapy, and many will eventually become resistant to the drugs.

By allowing doctors to tailor the use of hormone therapy to those patients who are most likely to benefit, the imaging test offers a potentially valuable tool for oncologists, said Stanley Lipkowitz, M.D., Ph.D., of the Women’s Malignancies Branch in NCI’s Center for Cancer Research, who was not involved in the new study.

Although the results need to be confirmed in a larger study, they are “exciting” and “promising,” said Laura Kennedy, M.D., Ph.D., a medical oncologist and breast cancer specialist at Vanderbilt University Medical Center, who also was not involved with the study.

The test could help patients with ER-positive breast cancer avoid months of ineffective treatment during which their disease may progress, said study leader Farrokh Dehdashti, M.D., of the Washington University School of Medicine in St. Louis.

Estrogen Receptors Are in the Tumors, but Are They Active?

To find out whether breast cancer cells contain estrogen receptors, doctors currently test samples of tumor tissue that have been removed surgically or with a needle biopsy.

Patients with advanced ER-positive breast cancer—cancer that has come back after treatment or spread (metastasized) to other parts of the body—usually are started on hormone therapy and then monitored to see if their cancer responds to treatment.

However, current tests don’t provide any information on whether the estrogen receptors in tumor cells are driving the tumor’s growth and, thus, are likely to respond to hormone therapy.

Using FFNP to “Light Up” Tumors

For this small clinical trial, Dr. Dehdashti’s team studied 43 postmenopausal women with advanced ER-positive breast cancer. They used FFNP as an imaging agent in PET-CT scans, which combine PET scans with CT scans, an imaging method that uses a form of x-rays. PET-CT scans provide more precise information about the anatomical location of tumors that “light up” with FFNP than a PET scan alone can provide.

Patients first underwent PET-CT scans with FFNP. They were then given three doses of estrogen over a 24-hour period, and the imaging test with FFNP was repeated. PET-CT scans before and after the 24-hour estrogen “challenge” were compared to look for changes in the amount of FFNP taken up by tumors.

After the scans were completed, all of the patients received various types of hormone therapy, as recommended by their oncologists. The team followed all patients for a minimum of 6 months and monitored their responses to treatment.

Breast cancer progressed in 15 of the 43 patients (nonresponders) within 6 months of starting hormone therapy, and the disease remained stable or improved in the other 28 patients (responders). These 28 women lived longer than the 15 whose tumors did not respond to therapy.

The researchers then compared the FFNP PET-CT scans of responders and nonresponders.

Some patients experienced short-term side effects following the one-day estrogen challenge. These side effects, most of which were mild, included diarrhea, nausea and vomiting, and musculoskeletal pain. No side effects were seen after FFNP was given.

This was a small clinical trial done at a single medical center and needs to be repeated in a larger multicenter trial before the test can be used routinely in people with advanced breast cancer, Dr. Dehdashti said.

If the findings are confirmed, she said, the new estrogen challenge test would offer advantages over tissue biopsies beyond showing whether estrogen receptors are functional. Whereas a biopsy usually samples only a small piece of tumor tissue, the FFNP imaging agent lets doctors see the entire tumor as well as showing all of the cancer lesions in the body at one time, including those that can’t be biopsied readily, Dr. Dehdashti explained.

The ability to visualize estrogen receptor function in all the tumors in the body is a significant advantage, said Janet Eary, M.D., associate director of NCI’s Cancer Imaging Program, who was not involved with the study. That’s because the presence of estrogen receptors—and presumably whether the receptors are responsive to estrogen or not—can vary quite a bit among metastatic tumors within an individual, which could also influence treatment decisions.

So, having a test like this could be a game changer.

“The cost of ineffective treatment is enormous,” not only in terms of financial cost but also the potential loss or shortening of human life, Dr. Eary said.

“This test would integrate really well into practice, where we often do PET scans in patients with metastatic breast cancer,” Dr. Kennedy said. “We know that those patients’ [ER-positive] tumors ultimately will become resistant to hormone therapy, and so if someone’s cancer is progressing quickly, it might be helpful to have a [one day] test to let you know that some patients should be switched to chemotherapy sooner.”

The test also could help identify patients who may still respond to another type of hormone therapy after their disease becomes resistant to, and progresses on, the first hormone therapy given, Dr. Lipkowitz said.

As a result, she said it will be important to see how well the test performs in a study that is not only larger but also involves a group of patients who receive similar treatments for their cancer. Studying more homogeneous groups of patients could more effectively reveal limitations in the test’s ability to distinguish between patients with hormone therapy–sensitive versus –resistant tumors, she said.

It is also not clear if the estrogen challenge would be feasible in premenopausal women because their circulating estrogen levels are naturally high, Dr. Lipkowitz noted.

One other limitation of the test, the study investigators note, is that it cannot be used in patients with breast cancer that has spread only to the liver because normal liver takes up large amounts of FFNP.

“World’s Tiniest Baby” Has Been Released From The Hospital