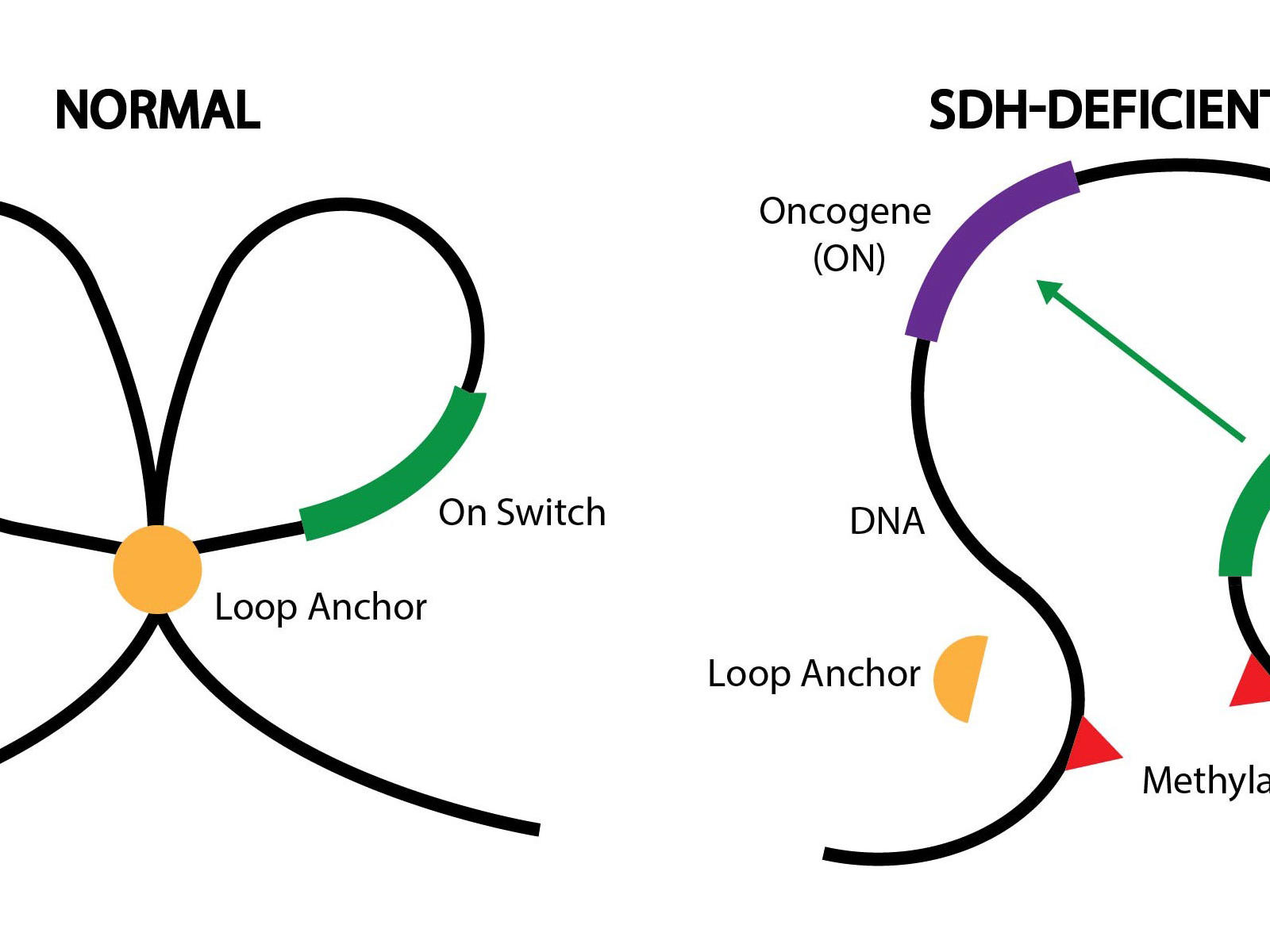 Scientists may have pinpointed the cause of some forms of a rare cancer called gastrointestinal stromal tumors (GISTs), according to a new NCI-funded study. However, the culprit isn’t a harmful genetic mutation, as is typical for cancer, but changes in genes that don’t involve mutations—what are called epigenetic alterations.

About 10% of people with GIST have a form of the disease known as SDH-deficient GIST. Tumors of this type are marked by widespread epigenetic alterations but, until now, it hasn’t been clear if these alterations caused the cancer and could be potential targets for treatment.

The new study shows that, in tumors of some people with SDH-deficient GIST, epigenetic alterations turned up several cell-growth genes to such high levels that they drove cancer growth.

What’s more, treatment with a combination of drugs that block the proteins made by those genes substantially slowed the growth of SDH-deficient GIST in mice, Bradley Bernstein, M.D., Ph.D., of Massachusetts General Hospital and the Broad Institute, and his colleagues reported October 16 in Nature. One of the drugs, sunitinib (Sutent), is used to treat another form of GIST. The other, infigratinib (also called BGJ398), is being tested in clinical trials of a few types of cancer.

There are no effective drug treatments for SDH-deficient GIST, which typically develops in the stomachs of children and young adults, said John Glod, M.D., Ph.D., of NCI’s Pediatric Oncology Branch. After surgery to remove the tumor(s), most patients are carefully monitored for cancer growth, he explained.

The study findings “have the potential to open up new avenues for therapeutic intervention…in this subset of GIST tumors,” said Ian Fingerman, Ph.D., a program director in the DNA and Chromosome Aberrations Branch of NCI’s Division of Cancer Biology. Neither Dr. Glod nor Dr. Fingerman was involved in the study.

Although it may be hard to imagine, about 6 feet of DNA fits into the nucleus of every human cell. To make this possible, DNA is wound, woven, and folded into compact structures that resemble a tangled heap of yarn.

But DNA isn’t arbitrarily strewn around the nucleus—rather, it is carefully arranged to create a precise three-dimensional “landscape” in which each section of DNA is placed in a specific location.

This precise landscape helps control which genes get turned on and when. For example, DNA can be folded into loops to separate certain genes from nearby “on switches”—sections of DNA that send genes into overdrive, that is, cause them to make more protein.

Epigenetic alterations can change how DNA is folded, affecting which genes are turned on and off. Such changes are, in part, what makes a blood cell different from a nerve cell even though they have the exact same set of genes, Dr. Bernstein explained.

Dr. Bernstein’s team studies epigenetic alterations in diseases like cancer. The group became interested in GIST because although the vast majority of these tumors are caused by mutations in two oncogenes (KIT and PDGFRA), some GIST tumors lack these mutations.

However, most of these tumors that lack KIT and PDGFRA mutations (also called wild-type GIST) have genetic or epigenetic alterations that lead to the loss of a protein named SDH. A few years ago, NCI researchers found that SDH-deficient GIST is marked by widespread epigenetic changes, but it wasn’t clear if and how these changes caused the cancer to grow.

The new study suggests that epigenetic alterations do in fact cause the growth of SDH-deficient GIST.

Some of the displaced anchors were located near loops containing the oncogenes FGF3, FGF4, and KIT. Without anchors, the oncogenes were able to interact with on switches in adjacent loops.

“Under normal conditions, [anchors] protect the cancer-causing genes from an on switch in the other loop. But what we found was that DNA methylation destroys the anchor, causing the loops to merge into one,” Dr. Bernstein said.

As a result, all three genes were turned on and made high levels of protein, the researchers found. In contrast, FGF3 and FGF4 protein levels were low or not detected in tumors of people with KIT– or PDGFRA-mutant GIST.

These findings demonstrate how, even “in the absence of a mutation, an oncogene can still be potently activated,” Dr. Bernstein said.

An Opportunity for Treatment?

The team wondered whether drugs targeting KIT and FGF could stop SDH-deficient GIST from growing.

So, they created a mouse model using tumor samples from a patient with SDH-deficient GIST. Based on lab tests, the model appeared to faithfully represent the patient’s tumor.

It has been difficult to create laboratory models of SDH-deficient GIST in the past, Dr. Glod noted, so having a model on which to test potential therapies is really important and useful.

Simultaneously treating mice with sunitinib and infigratinib was even more effective, the researchers found, suppressing tumor growth to a greater extent and for a longer period of time than either drug alone, even after the treatment was stopped.

Dr. Bernstein and his colleagues are currently working with NCI’s Clinical Therapy Evaluation Program in hopes of launching a clinical trial of infigratinib for people with SDH-deficient GIST. Their goal is to test the combination treatment further down the road, Dr. Bernstein said.

SDH-deficient GIST typically grows quite slowly, Dr. Glod noted, so potential side effects of any treatment need to be carefully considered.

In a small clinical trial, infigratinib was tested in combination with another drug that blocks KIT, imatinib (Gleevec), for people with GIST who had previously received imatinib, Dr. Glod added. The combination appeared to be tolerated, although it did not shrink tumors. Whether a similar combination would be more effective for people with SDH-deficient GIST is an open question, he said.

Dr. Glod leads an ongoing clinical trial of people with wild-type GIST that is testing guadecitabine, a drug that that reverses DNA methylation.

Cancer researchers have been studying epigenetics for years and studies suggest that epigenetic alterations are common in many kinds of cancer. In fact, several drugs that target epigenetic changes are used as cancer treatments.

But “one of the many questions that remains in the epigenetic field is: what are the underlying mechanisms that link epigenetic aberrations to a specific disease?” Dr. Fingerman said. This study is one of few to pinpoint a very specific epigenetic change as the cause of a cancer, he added.

Are Cancer Patients Getting the Opioids They Need to Control Pain?

The Late Alex Trebek’s Wardrobe Is Being Given to Homeless Men...

How to Get Started With Meditation During Cancer

How to Talk About Cancer With Someone Who Has It

When Ellen Found Out There Was A Grieving Mother In The...

Man Who Lost Wife to Breast Cancer Wants to Donate Her...