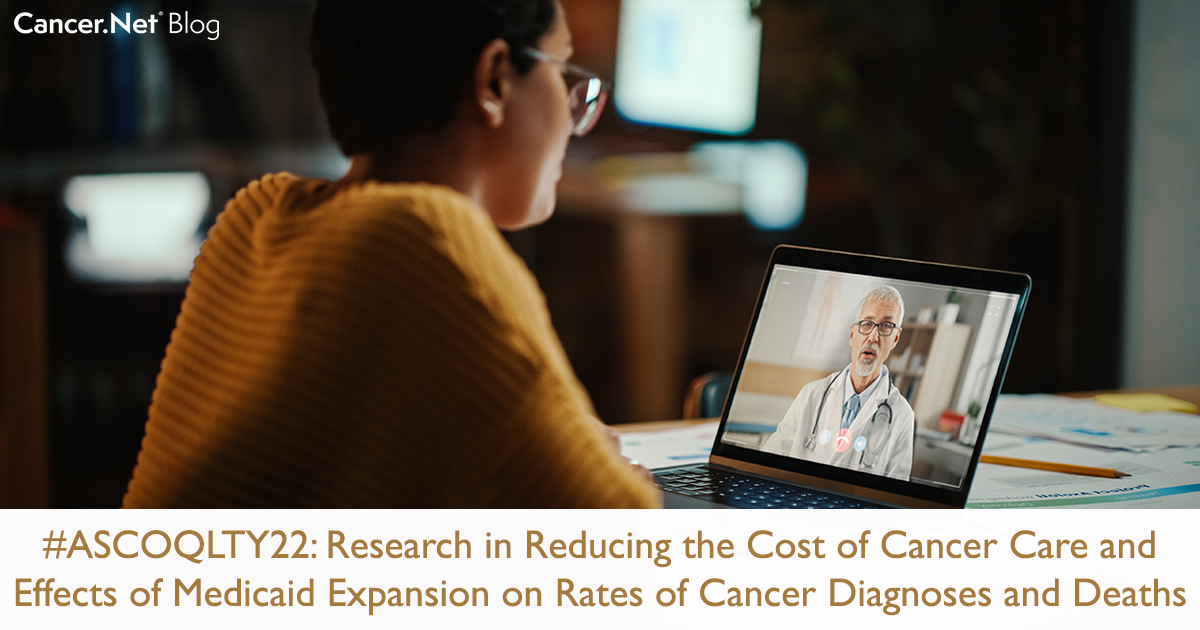 The 2022 American Society of Clinical Oncology (ASCO) Quality Care Symposium will be held in person and online on September 30 and October 1 in Chicago, Illinois. This meeting brings together health care professionals from around the world to discuss research in improving cancer care and reducing disparities in care for all people with cancer.

There will be 3 studies highlighted at this year’s symposium:

You can learn more about research from this symposium by following the #ASCOQLTY22 hashtag on Twitter.

A study in New Jersey found that providing patients with a virtual cancer navigation program through their Medicare Advantage health plan reduced their total cost of care by an average of $429 per patient per month. The program was used across a wide variety of locations and practice types within the state, ranging from small community practices to large academic medical centers. Medicare Advantage plans provide Medicare Part A and Part B insurance coverage through private companies rather than the U.S. federal government.

To analyze how the navigation program impacted the total cost of care, researchers compared the medical and payment records of 222 people from the group who received the navigation program with the records of 222 people from the group who did not. For this study, total cost of care means the cost that the medical practice or institution paid per patient, so any cost savings to the practice may or may not have also provided savings to the patient.

The researchers looked at medical records from March 2021 to June 2022 and found that the average total cost of care was reduced by $429 more per patient per month in the group that received the navigation program compared with the group that did not. A separate analysis showed that the cost savings could range from $209 to $708 per patient per month for those in the cancer navigation program. Most of these cost savings came from fewer in-person office visits.

What does this mean for patients? This large-scale study adds to recent research showing that providing cancer navigation programs to people with cancer through their health plan can help reduce the total cost of their care.

“New and more effective therapies for cancer are constantly being introduced. Despite many of these advances, care coordination can often be fragmented, education about the best care options can be lacking, and access to care isn’t always easy. We’re missing some of the foundational components that enable whole person care. Navigation can fill these gaps, and we believe this study helps to chart a path forward on how to expand navigation to help more people.”

A study of the Medicare-based Oncology Care Model (OCM) found that treating patients with biosimilar drugs, generic drugs, and lower-cost drugs as substitutes for more expensive cancer drugs reduced the total cost of their care without impacting the quality of care. Biosimilar drugs are versions of biologic drugs, which are drugs made from living things like cells, tissues, or proteins. Generic drugs are drugs with the same active ingredients as a brand name drug. Both types of drugs are used in cancer treatment to help lower the cost of care.

In July 2016, the Centers for Medicaid and Medicare Services (CMS) developed the 5-year OCM program to improve cancer care while reducing the costs of care. The model, which enrolled people with Medicare receiving chemotherapy or hormonal therapy, focused on providing more personalized care to patients. It included access to financial, emotional, and social support services as well as 24-hour access to doctors. Practices that participated in the OCM received a monthly payment for every patient they enrolled to help support these expanded services.

Through the OCM, patients would receive lower-cost cancer drug alternatives based on their doctor’s evaluation of the effectiveness and safety of the drug based on the patient’s specific situation and needs. In this study, researchers evaluated the cost savings from using:

Data from patients enrolled in the OCM were evaluated in 6-month periods called “performance periods (PP).” In this study, researchers observed the cost savings from using lower-cost drug alternatives during PP7 (July 2019 to December 2019), PP8 (January 2020 to June 2020), and PP9 (July 2020 to December 2020). Researchers determined cost savings by evaluating Medicare claims for health care services and prescriptions from 14 practices in the OCM.

The data showed that the cumulative savings from switching to biosimilars, generics, and lower-cost drug alternatives was $26 million in PP7 (July to December 2019), $32.3 million in PP8 (January to June 2020), and $32.9 million in PP9 (July to December 2020). Switching to biosimilars alone contributed $6.6 million in savings in PP8 and $12.2 million in PP9. Overall, these switches reduced the total cost of care by 2.78% in PP7, 4.13% in PP8, and 5.25% in PP9. Both the Medicare program and patients saw these savings benefits, with patients experiencing lower copays and lower out-of-pocket expenses.

What does this mean for patients? This study found that careful medical consideration of lower-cost alternatives to high-cost cancer drugs, including biosimilar drugs and generic drugs, can reduce the total cost of cancer care for patients without impacting the quality of their care.

“Our study shows that smarter spending can be achieved while also boosting quality of cancer care. The big challenge for providers and pharmacists is balancing preferred options from a variety of insurers as well as the storage, prior authorization, and billing specificity that accompany having to use different biosimilars or drugs for patients with differing insurance plans. These are complex circumstances that we hope our study will help sort out and result in lowering costs for everyone.”

A nationwide study showed that states that expanded Medicaid under the Patient Protection and Affordable Care Act (ACA) in 2014 saw a decline in metastatic cancer diagnoses and cancer deaths compared to states that did not expand Medicaid. Additionally, the decrease in diagnoses of metastatic cancer was found to play an important role in the lower death rate.

Medicaid is a type of government health insurance for people in the United States with lower incomes who meet certain conditions. While Medicaid is jointly funded by the federal and state governments, each state operates its program individually and decides who can receive Medicaid benefits within the state. In 2014, the ACA gave states the option to expand Medicaid eligibility to people with incomes up to 138% of the Federal Poverty Level. While earlier studies have shown that Medicaid expansion led to earlier cancer diagnoses and better cancer survival in many states, the researchers of this study wanted to learn what helped drive the improvement in cancer survival within expansion states.

In this study, researchers evaluated cancer incidence and death data from 2001 to 2019 in people ages 20 to 64 from all 50 states and Washington, D.C. The data used was from the Surveillance, Epidemiology, and End Results (SEER) and National Program of Cancer Registries databases for incidence data and the National Center for Health Statistics for death data. The researchers analyzed the data to compare changes in the incidence rates of localized and metastatic cancer diagnoses and cancer deaths before and after 2014 in both Medicaid expansion states and non-expansion states.

The researchers did not see any differences in the incidence rates of localized cancer between states that did and did not expand Medicaid.

“Perhaps the most surprising finding in our study was the lack of change in localized cancer incidence rates in states with Medicaid expansion as it has been believed that the expansions might have increased access to cancer screening and enabled patients to see a physician earlier for cancer-related symptoms. Some studies have shown that Medicaid expansion effects on localized cancer incidence rates dissipated over time, which is perhaps consistent with our findings looking at the entire post-expansion period from 2014 until 2019 in aggregate.”

Cancer Survivor Kicked Out Of Bridal Party Cause She Refused To...

Veteran and His Loyal Dog Pass Away Within Hours Of Each...