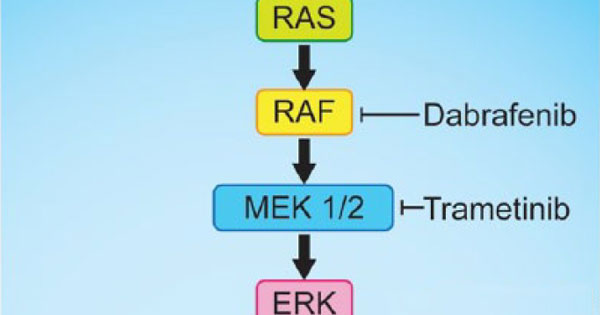 The Food and Drug Administration (FDA) recently approved the combination of two targeted drugs, dabrafenib (Tafinlar) and trametinib (Mekinist), for the treatment of two different types of cancer.

For patients to be able to receive the dabrafenib–trametinib combination for either type of cancer, their tumors must have a specific mutation in a gene called BRAF. This mutation, called BRAF V600, can increase the growth and spread of cancer cells.

“Dabrafenib inhibits the enzyme produced by the BRAF gene, which is ‘turned on’ in tumors that harbor mutations in the gene. But tumors can develop resistance to this drug by turning on other cell signaling pathways,” Dr. Korde said. “The addition of trametinib blocks one of these pathways of resistance, leading to better activity.”

FDA had previously approved the dabrafenib–trametinib combination for the treatment of BRAF mutation–positive non-small cell lung cancer and melanoma that has spread elsewhere in the body (metastasized) or that cannot be removed by surgery.

The new approval for melanoma expands the use of the drug combination as a post-surgical, or adjuvant, treatment in patients who have cancer cells found in lymph nodes near a surgically removed tumor.

In the clinical trial on which the new melanoma approval was based, which was funded by Novartis Pharmaceuticals, almost 60% of patients given the drug combination after surgery remained disease-free after 3 years, compared with about 40% of those who received a placebo combination.

The combination also appeared to be safer, at least in one way, than dabrafenib alone: compared with what had been seen in earlier trials of the single drug, in this trial a smaller percentage of patients who took the combination developed a second cancer due to therapy.

The second cancers seen in earlier trials of dabrafenib alone may be driven by the same pathway that trametinib blocks, said Dr. Korde. Therefore, adding trametinib could reduce the risk of this side effect, she explained.

The most common side effects from the two-drug combination are fever, fatigue, and nausea.

A Meaningful Treatment Option for a Rare Cancer

The approval for anaplastic thyroid cancer was based on results from a clinical trial that enrolled patients with any one of nine types of cancer with a BRAF V600 mutation. Out of 23 patients with anaplastic thyroid cancer enrolled in that trial, which was also funded by Novartis, 57% had at least some reduction in the size of their tumors during treatment, and 4% saw their tumors disappear completely.

So-called basket trials, such as NCI-MATCH, which recruit patients based on the molecular makeup of their tumors instead of where in the body the cancer arose, are growing more common in the era of targeted therapies.

In a paper published in the Journal of Clinical Oncology before the FDA approval, the study authors estimated that 80% of patients who received dabrafenib and trametinib would be alive a year after treatment started. In comparison, only about 20% to 40% of patients with anaplastic thyroid cancer live for a year after diagnosis when given other therapies, such as radiation or chemotherapy. The researchers will keep following the trial participants to measure survival rates at 1 year and beyond.

“A significant subpopulation of patients with anaplastic thyroid cancer now have a very meaningful treatment option, and for us that is a really big deal, because this disease has a grim prognosis,” commented Barbara Murphy, M.D., director of Head and Neck Oncology at Vanderbilt-Ingram Cancer Center, who was not involved in the trial.

About one in four anaplastic thyroid cancers carry a BRAF V600 mutation, she said, and testing for this mutation will rapidly become part of standard care for patients with this cancer.

A Molecular Approach to Trial Design

The trial that led to the approval for anaplastic thyroid cancer “is a really phenomenal example of how these rare tumors are well-served by a rational approach to therapeutic investigation,” in which drugs are tested based on the knowledge of specific molecular pathways that can drive cancer, said Dr. Murphy.

“For uncommon tumors, you’re never going to be able to accrue enough patients for a large randomized phase 3 trial. But basket trials serve these patients with rare cancers well,” she added.

Dr. Murphy is hopeful that as more basket trials are conducted, oncologists in the community will be more willing to suggest them to their patients with rare cancers. These patients have had few opportunities to join trials in the past, and it’s important that oncologists refer these patients to the hospitals running such studies, she continued.

“Basket trials can identify therapies for rare tumors, but patients have to be referred to studies to allow those results to accumulate,” said Dr. Murphy

Results from ongoing clinical trials may also answer questions about targeting BRAF and associated pathways in melanoma, Dr. Korde said. For example, nivolumab (Opdivo), a type of immunotherapy called an immune checkpoint inhibitor, received FDA approval in December 2017 for use as an adjuvant therapy in melanoma.

Both nivolumab and the dabrafenib–trametinib combination are effective therapies in melanoma, she continued, “[but] for patients with a BRAF mutation, we don’t know whether it is better to start with one or the other of these treatments,” said Dr. Korde.

Researchers are also looking into launching trials targeting other mechanisms of drug resistance in these BRAF mutant tumors, which can arise even with the addition of trametinib.

“As we learn more about what specific gene alterations or characteristics drive cancers to grow, we will likely see more drug approvals based on molecular traits,” concluded Dr. Korde.

The Obesity Paradox: It Increases Diabetes Risk But Can Help Cancer...

Immunotherapy Combination Most Effective as Initial Treatment for BRAF+ Melanoma