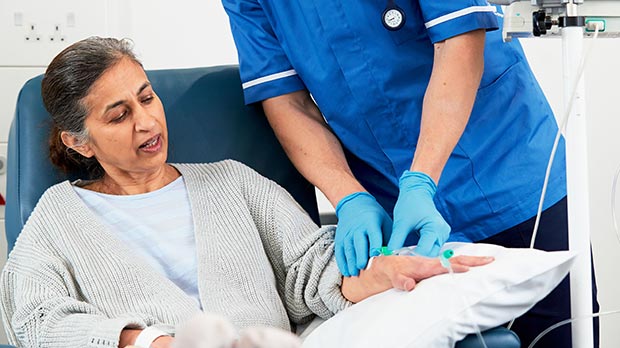 “Timing is everything when it comes to treating colon cancer,” says Matthew Seymour, Professor of Gastrointestinal Cancer Research at the University of Leeds.

He knows that’s much more than just a phrase. Seymour helped run the FOxTROT trial, which showed that starting chemotherapy just a few weeks earlier can change outcomes for people with colon cancer. Beginning it before surgery, instead of after, significantly cuts the risk of the disease coming back.

It’s likely that the findings will change how doctors treat colon cancer (which is a type of bowel, or colorectal, cancer) in the NHS and around the world.

Changing how we treat colon cancer

“The standard approach has been to give chemotherapy after surgery to eradicate any cancer cells that might have spread,” explains Dr Laura Magill, an Associate Professor at the Birmingham Clinical Trials Unit, and another one of the FOxTROT trial leads. “But our research shows that giving some of that chemotherapy before surgery increases the chances that all cancer cells will be killed.”

Starting chemotherapy 6 weeks before surgery lowered the risk of colon cancer returning in the following 2 years by 28%. It also reduced the number of side effects from surgery, so patients were less likely to have problems like an infection, or to need another operation.

Saving lives around the world

Those results are especially impressive because they don’t rely on expensive new treatments or technologies. It’s quick and easy to start giving people chemotherapy 6 weeks earlier.

In fact, at least 5,000 people in the UK could benefit from the change every year – at no extra cost. Worldwide, the researchers behind the trial predict it could be used to treat hundreds of thousands more.

“In many parts of the world cancer treatments can be prohibitively expensive,” says lead investigator Dion Morton, Professor of Surgery at the University of Birmingham. “We wanted to go in the opposite direction, testing a treatment that could be used on the widest possible group of patients.

“Thanks to funding from Cancer Research UK, doctors in countries around the world will now be able to put these findings into clinical practice, saving many thousands of lives.”

After taking part in the FOxTROT trial, Geoff Hoggard is now back “living life to the full”.

Geoff Hoggard, from Leeds, joined the trial after he was diagnosed with colon cancer in 2016.

“I had noticed blood in my poo a few times and initially I had felt quite embarrassed about it. But I ended up being diagnosed with colon cancer, which was a massive wake-up call. Doctors saw the cancer very clearly with a colonoscopy and I was told that it needed urgent treatment, which came as a huge shock.

“I was willing to take any opportunity to get the most effective treatment. The FOxTROT trial felt like the best way to do that, and I was happy to sign up when my consultant offered to put me on it.

“I got 6 weeks of chemotherapy before surgery and 18 weeks after, which was hard going. Brain fog and severe tiredness took its toll on me. I kept going, thanks to the support of friends, family and my local church, who were a constant source of strength.

“Eventually, it was all worth it. I’ve had no complications since the surgery, and there were no signs of cancer in the months and years after. 6 years on, I’m back living life to the full.

“I have no regrets at all about taking part in the FOxTROT trial. I hope that many others will live longer, free from cancer, because of the developing science that underpins this new approach and which worked so well in my case.”

We fund trials like FOxTROT to make sure there can be more people like Geoff living life to the full.

Today, up to 1 in 3 colon cancer patients see their cancer come back after surgery. Magill speaks for all of us when she says: “That figure is far too high.”

Now, though, we have a way to quickly start bringing that number down, and FOxTROT could also be a platform for even more improvements.

The scientists are now working on 2 more clinical trials. One will investigate whether older patients can also benefit from chemotherapy before surgery. The other will find out if adding in more chemotherapy drugs before surgery further reduces the chances of colon cancer coming back.

If FOxTROT-2 and FOxTROT-3 are as successful as the first study, we can expect more changes in how we treat colon cancer. The two new trials could provide the evidence doctors need to give patients more tailored treatments before and after surgery.

That’s an exciting prospect. We’ve learned that we can make a difference today, without waiting for expensive new drugs – but that’s not the whole story. Thanks to FOxTROT, we may have found a better way using those drugs once we have them.

Atezolizumab Approved for Some Patients with Triple-Negative Breast Cancer

Study Estimates That 22% Of Breast Cancers Are Overdiagnosed And Won’t...