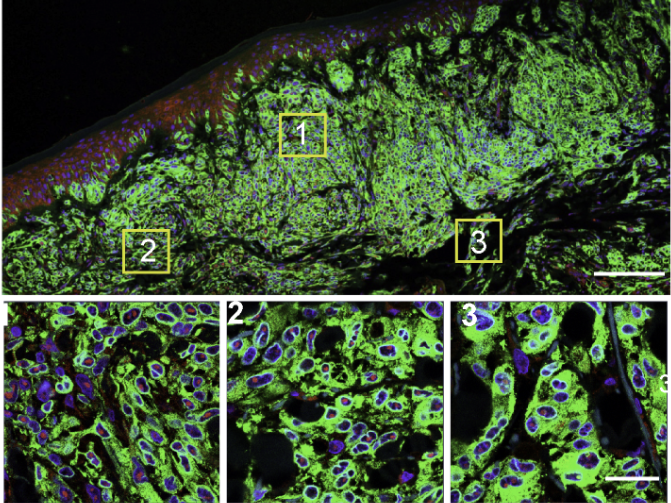 When it comes to melanoma, a potentially deadly type of skin cancer, there isn’t equality between the biological sexes. When melanoma has spread from its original location (metastasized), male patients don’t live as long as female patients. Melanoma in males is also more likely to become resistant to several commonly used treatments for the disease.

A new study that analyzed melanoma samples from people treated with targeted therapies that inhibit the proteins BRAF and MEK may help explain why: the androgen receptor. Levels of this protein in tumor cells jumped during treatment with BRAF and MEK inhibitors—particularly in males, but also, to a lesser extent, in females.

The androgen receptor binds to hormones called androgens (such as testosterone), which are found at much higher levels in males than females. It directly contributes to the development and growth of prostate cancer and is a major target of treatment for that disease.

In the study, published June 15 in Nature, the research team concluded that signaling through the androgen receptor also likely plays a role in treatment resistance in melanoma.

Additional studies in mouse models of metastatic melanoma found similar sex-based survival differences between males and females as those seen in people. Using the mouse models, the researchers also found that blocking the androgen receptor improved how long male and female mice treated with these targeted therapies live.

The study has numerous implications, explained one of the study’s researchers, Timothy Heffernan, Ph.D., of the University of Texas M.D. Anderson Cancer Center. These range from potential cautions about the use of testosterone supplements in people undergoing treatment for melanoma to possible new strategies for improving treatment response.

“There’s a lot of potential, but a lot more research is needed to better understand the impact of hormone signaling on the response to both targeted therapies and immunotherapy [in melanoma],” Dr. Heffernan said.

Substantial improvements in understanding the role BRAF and MEK proteins play in melanoma have helped revolutionized its treatment. These proteins form part of a cell communication pathway that influences critical functions such as cell division and cell death.

Drug combinations that target both of these proteins simultaneously have greatly extended the survival of people with advanced melanoma. But treatment resistance almost always develops over time. Researchers had noticed that this resistance tends to develop more rapidly in males.

To look more closely at this phenomenon, the research team studied the treatment responses of 51 patients with metastatic melanoma who had been treated with BRAF/MEK inhibitors for up to 12 weeks before surgery.

The team repeated these comparisons in several additional groups of people with metastatic melanoma that couldn’t be removed surgically and who underwent treatment with BRAF/MEK inhibitors. In most of these groups, including a total of more than 600 patients, females had greater reductions in tumor size and lived longer, both without their disease progressing and overall, than males.

Samples taken from patients’ tumors before and during treatment found higher levels of androgen receptors in male patients’ tumors during treatment compared with before treatment. A much smaller increase in androgen receptor expression was seen in samples taken from female patients, likely because they have naturally lower levels of testosterone, the study team explained.

In follow-up analyses in the group of patients who underwent surgery after treatment with BRAF/MEK inhibitors, androgen receptor levels in tumors before treatment were similar between people whose tumors shrank substantially and those whose tumors did not. But the researchers did find evidence that people with a higher level of androgen receptor expression in their tumors during treatment had a lower likelihood of having a tumor response.

“The androgen receptor can be expressed in males and females, in a variety of tissues, though not normally in the cells that give rise to melanoma,” explained Kathleen Kelly, Ph.D., of NCI’s Center for Cancer Research, who was not involved with the study.

But this can change with the stress of treatment. Under such stressful conditions, “when cancer progresses, [gene expression] gets a lot more ‘plastic,’” Dr. Kelly said.

“The cells are capable of expressing, in a random way, a lot of genes that they normally wouldn’t express. They’re looking for a way to escape [treatment], and I think what’s going on is that those that manage to express the androgen receptor have found an alternative pathway” for growth, she explained.

To look more closely at the potential role of the androgen receptor in treatment resistance, the team used several mouse models to pick apart the differing treatment responses between the sexes.

Regardless of the model used, when the team implanted mice with human melanoma tumors and treated the animals with BRAF/MEK inhibitors, they saw results similar to those seen in people: Tumors in male mice grew faster despite treatment.

When the team used the gene-editing tool CRISPR to delete the gene for the androgen receptor in melanoma cells before implanting them into mice, everything changed. Both male and female mice benefitted equally from treatment with the BRAF/MEK inhibitors, even when given testosterone to boost androgen receptor signaling.

“This suggested to us that it’s the androgen receptor, and androgen-dependent signaling, that’s conferring resistance in males,” said Dr. Heffernan.

Also similar to the results seen in people, the uptick in androgen receptor expression by the melanoma cells came during—not before—treatment, which indicates an adaptive response by the cells, Dr. Heffernan explained.

Additional experiments in male and female mice, including one involving a drug, enzalutamide (Xtandi), that blocks androgen signaling, seemed to confirm the receptor’s role in resistance to treatment with BRAF and MEK inhibitors.

These results raise the intriguing possibility of adding a drug that blocks the androgen receptor to treatment with BRAF/MEK inhibitors, the study team wrote.

As researchers have learned more about the potential role of the androgen receptor in different cancer types, clinical trials have already started testing the addition of androgen blockade to standard treatments for kidney, ovarian, and breast cancer, among others.

Use of BRAF/MEK inhibitors is also being studied in cancers other than melanoma, including thyroid and lung cancer, said Dr. Heffernan. And a BRAF/MEK targeted treatment combination was recently approved by the Food and Drug Administration to treat any type of cancer with a specific mutation in the BRAF gene.

“This suggests that our studies have to expand beyond melanoma to study the impact of androgen receptor signaling across BRAF-[mutated] tumors,” said Dr. Heffernan.

For now, it’s a mystery exactly how the androgen receptor can make tumors resistant to BRAF/MEK inhibitors, added Dr. Kelly.

But understanding the “how” may eventually suggest strategies to block androgen receptor signaling in a more targeted way depending on cancer type, said Dr. Heffernan. Such work would also likely have implications beyond targeted therapy, he added. For example, another recent study found that androgen receptor signaling also may limit the effectiveness of immunotherapy.

“The goal of our research in to define and exploit the mechanisms that are conferring resistance to targeted and immunotherapies,” he said. Because those additional studies will allow researchers “to better understand how to best treat patients.”

COVID-19: “It could take months to build research up again”

A winding journey into the world of children’s and young people’s...

Poziotinib Shows Promise in EGFR and HER2 Exon 20 Mutated Non-Small...