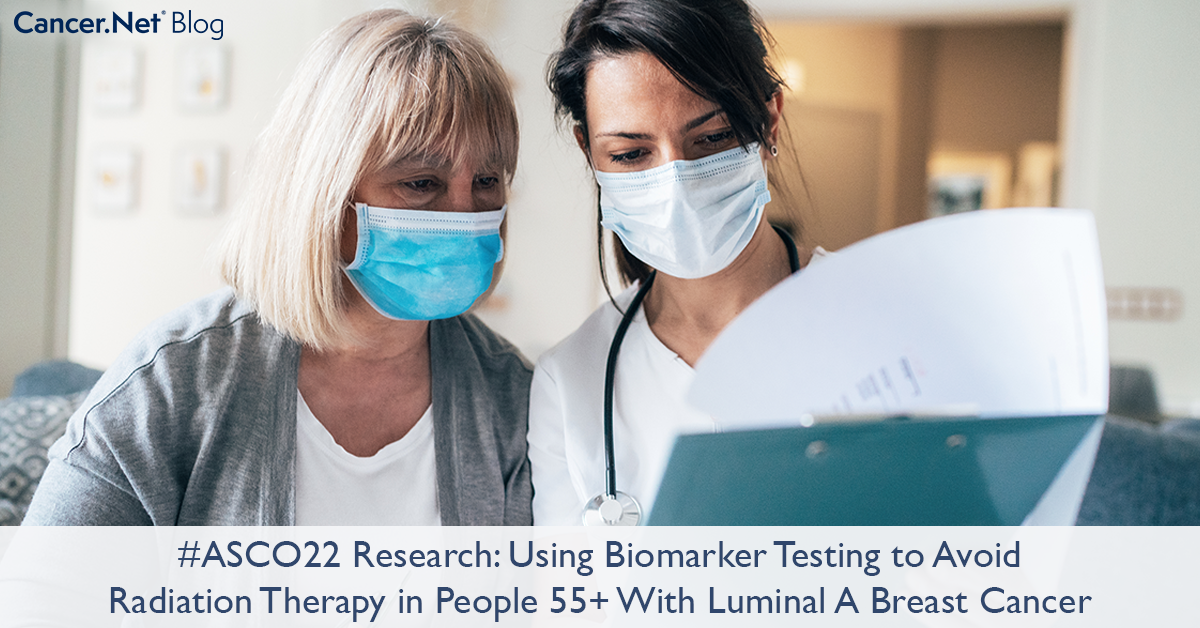 Some of the notable research that will be presented today includes:

Who does this study affect? People aged 55 or older with low-grade luminal A breast cancer who have received breast-conserving surgery.

What did this study find? The phase 3 LUMINA clinical trial found that radiation therapy may not be needed for patients aged 55 or older who have received breast-conserving surgery for low-grade luminal A breast cancer, as identified through biomarker testing.

Luminal A breast cancer is hormone receptor-positive, HER2-negative cancer that has low levels of the protein Ki-67, which can indicate how quickly cancer cells are growing. Ki-67 is a type of biomarker, which is a substance created by cancer cells in the body. Biomarkers are identified using a tool called biomarker testing, or tumor marker testing, which can help doctors recommend treatment.

People with a low grade, or slow-growing, type of luminal A breast cancer typically receive breast-conserving surgery (also called lumpectomy) to remove the tumor followed by hormone therapy and radiation therapy to reduce the risk of the recurrence, which is the chance of the cancer coming back. However, if radiation therapy can safely be avoided, that means patients won’t have additional side effects and costs of the treatment. Because people with luminal A breast cancer are known to have a low risk of recurrence, the researchers in this study were evaluating whether some people with this cancer could avoid radiation therapy after surgery without it impacting their risk of recurrence.

Participants in the study then received hormone therapy for 5 years after surgery but did not receive radiation therapy. They had a check-up every 6 months for the first 2 years and then once a year after that.

What does this mean for patients? People aged 55 or older with low-grade luminal A breast cancer, as identified through biomarker testing, may be able to safely avoid radiation therapy after breast-conserving surgery without impacting their risk of recurrence.

“Previous studies have shown that other tumor biomarkers can identify patients at very low risk of recurrence, thereby omitting chemotherapy as it is unlikely to offer benefit. The LUMINA results show that women with low levels of the Ki67 biomarker can avoid outcomes related to radiotherapy, including significant acute and late side effects; such effects include fatigue and rare life-threatening side effects of cardiac disease and second cancers.”

Firefighters Band Together To Raise $30k For Breast Cancer Research &...

Julia Louis-Dreyfus Talks About The Side Effects of Chemotherapy