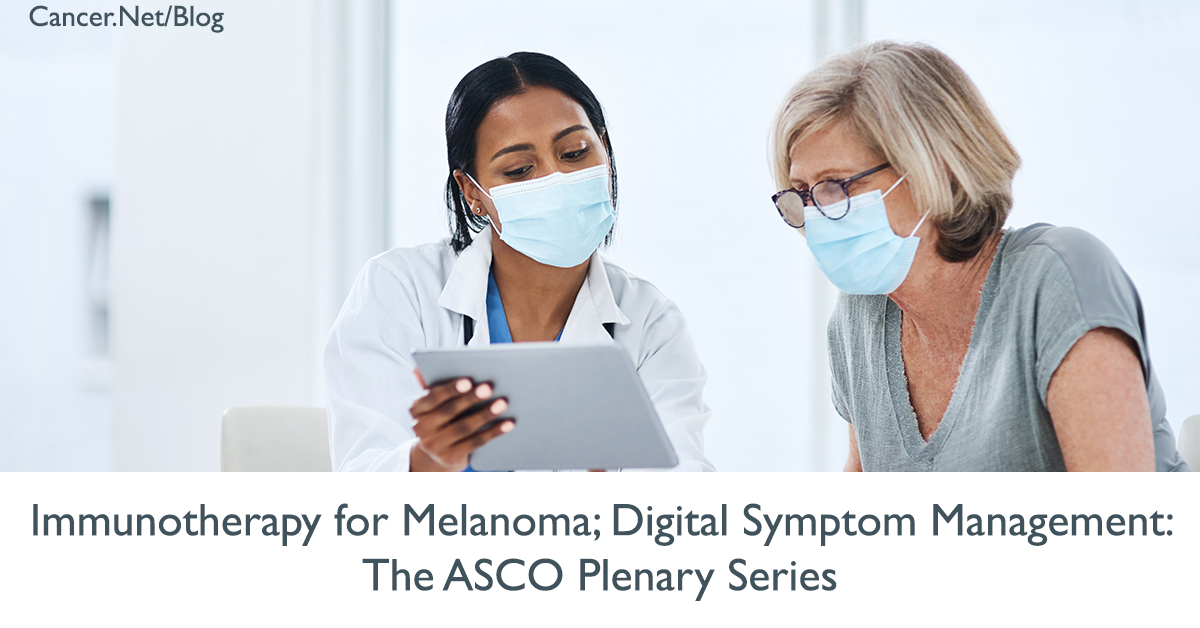 The pace of progress in cancer research keeps getting faster and faster. However, the results of this research can take time to reach the medical community. The ASCO Plenary Series is a new program developed by the American Society of Clinical Oncology (ASCO) to help speed the delivery of high-impact cancer research. In this new series, cancer care providers will now gather online to learn about new, carefully selected research and discuss the study results with their colleagues.

November 2021 marks the launch of the ASCO Plenary Series. The first session features a study on the treatment of metastatic melanoma and another on using technology to find and treat symptoms early.

Who does this study affect: People with metastatic melanoma with a BRAF V600 mutation.

The immunotherapy combination used to treat this kind of melanoma includes nivolumab (Opdivo) and ipilimumab (Yervoy). These drugs are a specific type of immunotherapy called immune checkpoint inhibitors. Nivolumab blocks a molecule called PD-1, and ipilimumab blocks a molecule called CTLA-4. The targeted therapy combination used in this study is dabrafenib (Tafinlar), which targets the BRAF mutation, and trametinib (Mekinist), which targets the MEK mutation.

The 2-year overall survival rate for those who started with immunotherapy was 72%. For those who started with targeted therapy, the 2-year overall survival rate was 52%. For a small number of participants, the targeted therapy combination as a first treatment was more effective in the first 10 months, but this effect was temporary and did not last over the long term. The researchers are hoping to find out more about why these patients may have experienced this effect. In addition, the researchers found that the melanoma was less likely to respond to treatment with immunotherapy if it was given after targeted therapy.

What does this mean for patients: For people with metastatic melanoma with a BRAF V600 mutation, beginning treatment with nivolumab and ipilimumab helped more people live longer than starting treatment with dabrafenib and trametinib.

“Our findings establish definitively that even for this oncogene driven tumor that the sequence beginning with immunotherapy—rather than targeted therapy—produces better overall survival for the vast majority of patients. This is practice-changing because many patients, especially in the community oncology setting, receive targeted therapy as their initial treatment.”

Who does this study affect: People receiving active treatment for metastatic cancer.

What did this study find: Researchers from the PRO-TECT clinical trial found that having patients fill out online surveys about their symptoms during cancer treatment helped their health care teams find and treat symptoms earlier and improved the patients’ quality of life.

This study was conducted across 52 cancer clinics in the United States and included 1,191 people with metastatic cancer who were receiving systemic treatment with medications. The median age of the participants was 63 years, and more than half (58%) were women. Most of the people in this study were white (80%), and 17% were Black. About 1 of every 4 people (27%) in this study lived in a rural location, and nearly 4 in 10 (39%) reported high school as their highest level of education. There were 201 participants (17%) who had never used the internet before.

The participants were divided into 2 groups. The 593 people in the study group received patient-reported outcome (PRO) surveys that asked about and tracked symptoms. The 598 people in the control group received standard supportive care to find and treat symptoms. For those in the PRO group, participants received a notification every week to fill out a survey describing their current symptoms, such as pain, nausea, vomiting, constipation, and diarrhea, as well as insomnia, depression, falls, and financial problems. The surveys were available in English, Spanish, and Mandarin Chinese. Participants could complete their surveys on a website or through an automated phone system. Reminders and follow-up calls were sent if participants did not submit their surveys for the week.

If the survey results indicated that someone’s symptoms were severe or worsening, they were emailed information about how to manage their symptoms at home. In addition, an email alert was sent to nurses at their treatment centers. The nurses were then able to reach out to the patients and help them manage their symptoms and get additional care, if necessary. The patient’s oncologist also received a report with data about their symptoms.

What does this mean for patients: For people in active treatment for metastatic cancer, technology offers potential solutions to help patients report their symptoms to their cancer care team. Detecting and managing symptoms early can help improve the physical condition of people with cancer and lead to a higher quality of life.

“This national trial provides evidence that a simple technology asking patients about their symptoms is feasible, significantly improves symptom management, and yields better clinical outcomes. For this type of system to work, it is essential to have not only high patient participation, but a strong commitment from the health care team.”

Ifosfamide May Be Treatment of Choice for Some People with Ewing...

Cervical screening in Wales extended to every 5 years: Why the...