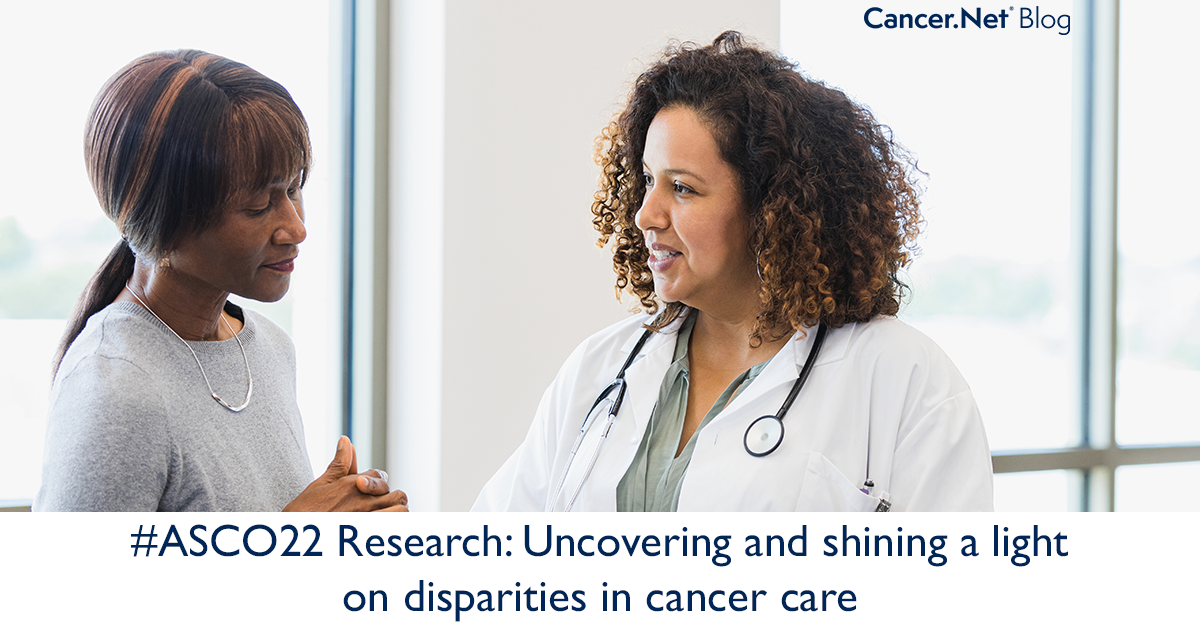 Today, research focused on cancer disparities and social determinants of health will be previewed in advance of the meeting. These studies’ topics include:

Who does this study affect? Black people with cancer who are eligible for social services.

What did this study find? An analysis of health and demographic information from nearly 3 million adults with cancer in the United States found that increased public spending by states on social services was associated with higher 5-year overall survival among Black people with cancer. Increased spending on such social services as Medicaid and programs that provide cash assistance for individuals, such as Supplemental Security Income, also narrowed the differences in survival between Black and White patients for many different types of cancers.

The researchers used data from the National Cancer Institute’s Surveillance, Epidemiology, and End Results (SEER) Program for this study. They looked at records of nearly 3 million adults aged 18 and older who were newly diagnosed with cancer from 2007 to 2016. For information about state spending on social services, the researchers used data from the U.S. Census Bureau. Using this information, the researchers looked to see if there were connections between 5-year overall survival and social services spending based on race, ethnicity, and type of cancer.

The analysis of the data first revealed that Black people have a 5-year overall survival that is nearly 11% lower than that of White people. However, the researchers saw that for every 10% increase in a state’s spending on social services, the difference in 5-year overall survival between Black and White patients closed by nearly 4.6%. For specific types of cancer, increased social services spending translated into higher overall survival rates for Black patients, as well as closing the gap in outcomes between Black and White patients:

What does this mean for patients? Existing research has shown that there are connections between cancer survival and social determinants of health, such as financial stability, education, community, nutrition, and access to health insurance. States with increased spending on social services lessened some of the impact of these social determinants of health and improved overall cancer survival for Black people.

“There is evidence that spending by states on various social services can mitigate structural racism and partially address social determinants of health, such as financial stability, education, place of residence, and insurance status, but such spending has also been associated with declines in racial and ethnic disparities, leading to unknown overall survival outcomes for patients with cancer. Our study provides some answers to some of these vexing issues.”

Who does this study affect? Black people with metastatic breast cancer.

What did this study find? A survey of patients with metastatic breast cancer found that 83% of Black respondents were somewhat or very likely to consider participating in a clinical trial. However, 40% of the respondents reported their care team had not informed them about the opportunity to enroll. This study is part of the BECOME initiative (Black Experience of Clinical Trial and Opportunities for Meaningful Engagement), which is sponsored by the Metastatic Breast Cancer Alliance.

In the United States, Black people are more likely than White people to die of breast cancer. About 15% of people with cancer in the United States are Black, but only 4% to 6% of people participating in clinical trials are Black. If the people participating in clinical trials do not match the populations affected by cancer, then it is more difficult to tell how a treatment will work for all patients.

The survey was sent to 424 women with metastatic breast cancer, and 102 of them self-identified as Black. In addition to revealing that many Black patients would consider a clinical trial, yet 40% were never told about joining one, the survey results also reported:

Based on these survey results, the researchers have suggested several ways to improve the way that people are informed of and enrolled into clinical trials in order to increase participation from Black people. Their suggestions included that more people need to be made aware of open clinical trials, increasing patient education about clinical trials, training health care providers to deliver patient-friendly information in an unbiased way, and engaging people of the same racial or ethnic identity and health experience to share these messages. Also, the researchers noted that clear communication is needed to build trust in clinical trials, including addressing concerns about side effects, treatment effectiveness, and whether treatment is given in a fair and equitable way. In addition, the researchers also suggested that people should be given help in finding and accessing clinical trials.

“This study was initiated in 2019 and led by a very special and ardent advocate of inclusivity in breast cancer trial enrollment. Sadly, she passed away from metastatic breast cancer, but we all strive to continue her efforts by bringing the patient voice and authenticity of advocacy to our work so that we can demonstrate the impact that patients can have on the clinical trials process.”

Telemedicine use for cancer care increased during the COVID-19 pandemic but varied by race, income, and other factors

Who does this study affect? All people receiving cancer care.

What did this study find? An analysis of data collected during the COVID-19 pandemic showed that while more people in the United States used telemedicine for cancer care overall, there were still groups of people who used telemedicine less. Telemedicine is the use of communication technology to support clinical care. It is also sometimes called telehealth or televisits. Telemedicine can help give people access to specialized health services, such as cancer care, that they would not normally be able to receive. Before March 2020, only a very small number of people with cancer used telemedicine services.

The researchers analyzed electronic health records of 26,788 people aged 18 or older who started cancer treatment at community-based cancer centers between March 2020 and November 2021, with follow-up through March 2022. The health records came from Flatiron Health, a health technology company that focuses on cancer.

What does this mean for patients? Telemedicine can help people receive care when in-person visits are not possible. Although more people used telemedicine during the early months of the COVID-19 pandemic, access to telemedicine was not equitable. Black people, people without insurance, people in rural areas, and people living in less affluent areas were all less likely to use telemedicine for cancer care.

“Our study provides the most recent and comprehensive evaluation of trends and inequities in telemedicine use across many sociodemographic characteristics. While telemedicine may expand access to specialty care, the proliferation of these services may widen cancer care disparities if vulnerable populations do not have equitable access.”

Race, ethnicity, and poverty are associated with lower overall survival in children with high-risk neuroblastoma

Who does this study affect? Children with high-risk neuroblastoma.

What did this study find? Previous studies of children with high-risk neuroblastoma have uncovered differences in survival based on race and poverty, even when they receive the same treatments in clinical trials. The majority of children with cancer are treated in clinical trials. This study added to that knowledge by analyzing data that shows Black children are more likely to be diagnosed with high-risk neuroblastoma and have higher rates of the disease returning after treatment. Research has also found differences in recurrence and survival among children living in poverty who received immunotherapy in a clinical trial after their initial therapy.

For this study, the researchers looked at data from 3 clinical trials run by the Children’s Oncology Group (COG) from 2007 to 2016. COG is a clinical trials group supported by the National Cancer Institute that studies childhood and adolescent cancers. The analysis included data from 696 children in the COG clinical trials. Of those children, 16% were non-Hispanic Black, 11% were Hispanic, 4% were other non-Hispanic, and 69% were non-Hispanic White. One-third (33%) of the children were living in households that had public health insurance only, such as Medicaid and the Children’s Health Insurance Program, which the researchers used to represent poverty. About one-quarter (26%) of the children were living in ZIP code locations with high rates of poverty. And 15% of the children lived in rural communities. There were no differences in tumor stage and biology based on race, ethnicity, or exposure to poverty.

The researchers saw differences in 5-year overall survival based on race and ethnicity.

The researchers also saw differences in 5-year overall survival based on a child’s exposure to poverty.

The analysis found no differences in 5-year survival between children living in rural areas and those in more urban areas. This may be because children who live in rural areas typically receive their care at cancer centers in cities.

“Many previous studies have shown racial, ethnic, and socioeconomic disparities across many different pediatric cancers, but we haven’t been able to comprehensively look at whether these disparities persist when you take into account the type of cancer treatment that children receive. To address this gap, we decided to look at whether outcomes were the same for children across racial and ethnic groups when they received treatment on the same clinical trials for high-risk neuroblastoma.”

These Triplets Were Tired Of Being Mistaken For Each Other. Their...

6 of the biggest good news cancer stories of 2021