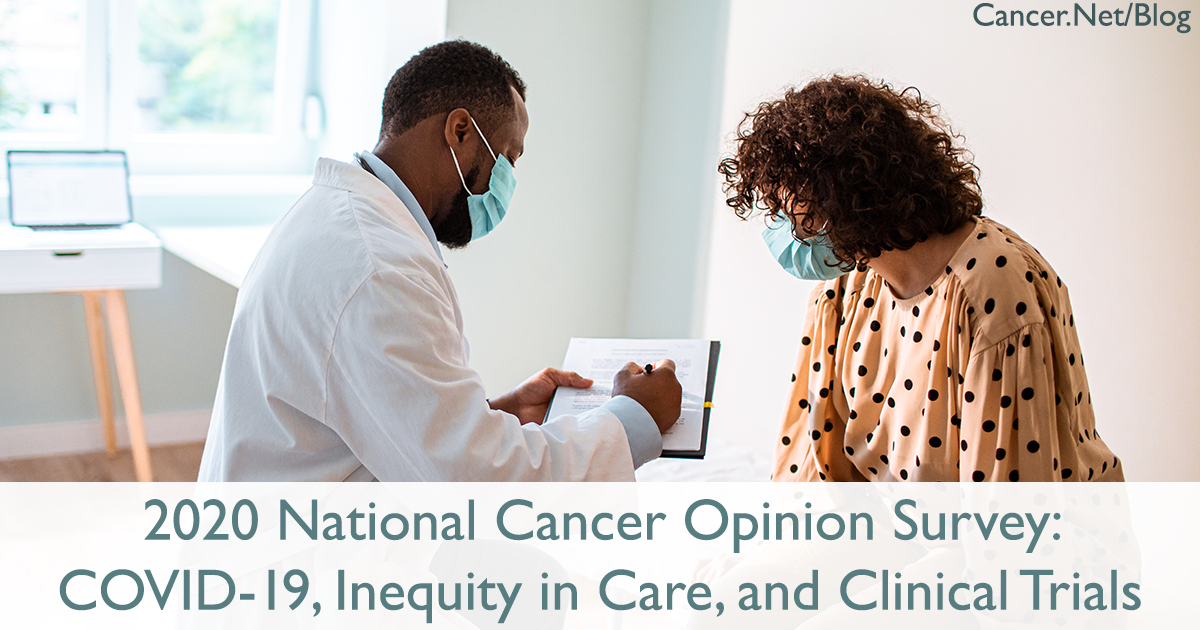 Each year, the American Society of Clinical Oncology (ASCO) analyzes changes in Americans’ perceptions of cancer-related issues over time through its National Cancer Opinion Survey.

This year, the survey found that, during the COVID-19 pandemic, about two-thirds of people who were scheduled to receive cancer screening tests reported delaying or skipping them. The survey also revealed how the pandemic is harming the well-being of some people with cancer. It also found that the majority of Americans believe that a person’s race can impact the health care they receive. Finally, while most Americans would be open to participating in a clinical trial, the survey found that there is a lack of understanding about how cancer clinical trials work.

“This survey assesses Americans’ perceptions of a wide range of cancer prevention and care issues during a most turbulent time in our country,” said 2020–2021 ASCO President Lori Pierce, MD, FASTRO, FASCO. “We set out to capture Americans’ views during a time of both a devastating pandemic and a national movement for racial justice. Our goal is to better understand public perceptions and address urgent needs and opportunities.”

This is ASCO’s fourth annual National Cancer Opinion Survey. This nationally representative survey was conducted by The Harris Poll from July 21 to September 8, 2020, among 4,012 adults who were 18 or older, including 1,142 people who have or had cancer.

Among Americans scheduled for a cancer screening test during the pandemic, more than 6 in 10 (64%) reported in this survey that their test was either delayed or canceled. While most of this group was concerned about being behind on their cancer screenings (63%), two-thirds of those scheduled for screenings said it was their choice to delay or cancel, not their medical center‘s decision due to COVID-19 safety precautions. Cancer screening tests include mammograms, colonoscopies, skin checks, HPV tests, and Pap tests, among others.

In addition to these findings about cancer screenings, the survey found that fewer than half of Americans take preventive measures to reduce their cancer risk. Among respondents, less than half took steps to reduce their sun exposure, with 48% using sunblock and 47% limiting their time in the sun. In addition, 47% of respondents reported taking efforts to maintain a healthy weight and 42% reported limiting their consumption of alcohol.

“While delaying recommended screenings for a few months is not necessarily dangerous, our biggest concern is that a significant number of Americans might stop getting preventive care for long periods of time or altogether,” said ASCO Chief Medical Officer Richard L. Schilsky, MD, FACP, FSCT, FASCO. “Cancer screenings are critical for detecting cancer early, and early detection is key to successfully treating many cancers. We need to make sure people continue to get their routine, evidence-based cancer screenings within a reasonable time period.”

Learn more about how COVID-19 impacts people with cancer and survivors.

“For people living with the challenges of cancer, the pandemic is adding a layer of hardship above and beyond what they would normally experience—from feelings of isolation to stress and anxiety,” said Dr. Pierce. “We urge every American with cancer and their family members to seek out the support they need to the greatest and safest extent possible.”

Read more about taking care of your emotional health during COVID-19.

Almost 6 in 10 Americans (59%) believe that racism can impact the health care a person receives, according to the results of this survey. But how people perceive the effects of race on health care depends on their own race. Racial minorities, including Black people (76%), Hispanic people (70%), and Asian people (66%), are more likely to hold this view than white people (53%). Black people are also significantly more likely to believe there is unequal access to cancer care in America, with 7 in 10 (71%) Black adults saying they are less likely to have access to the same quality of care as white people; compared to 47% of white respondents who believed this.

However, many Americans are still unaware of the impact race can have on cancer survival. In fact, fewer than 1 in 5 people (19%) believe race can impact a person’s likelihood of surviving cancer, despite Black people having the highest cancer death rate and shortest survival of any racial or ethnic group for most cancers. In this regard, more Black people (27%) and Hispanic people (22%) than white people (16%) think that race can impact someone’s chances of surviving cancer.

“Racism undermines public health, and it specifically affects patients with cancer,” said Dr. Pierce. “For almost every cancer, Black Americans fare worse than other racial groups. Now is the time to address the systemic issues of health inequity that negatively impact the health of Blacks and other people of color in our country.”

Learn more about cancer disparities among racial and ethnic minorities.

Three in 4 Americans (75%) would be willing to participate in a clinical trial if they had cancer, according to this survey’s findings. However, nearly half of Americans (48%) mistakenly think those with cancer who participate in a clinical trial are not receiving the best care possible. Clinical trials are carefully designed to be as safe as possible for the participants while the study learns if a new treatment is safe, effective, and possibly better than the existing treatments.

“Of the nearly 2 million people who receive a cancer diagnosis each year in the United States, less than 5% of adults enroll in clinical trials,” said Dr. Schilsky. “This is due in part to pervasive and persistent myths about trials and concerns that they are only a last resort. We need to do a much better job of educating our patients about the benefits of clinical trials. The fact is that clinical trials often offer patients the best—or sometimes only—treatment option for their condition, and these trials offer hope to individuals and at the same time are also the best way to make progress against cancer for everyone.”

0
Tom Freeman is an audio technology professional working in Silicon Valley. At night, he is a music and video producer who works with various...
Διαβάστε περισσότερα
World News

0
Dr. Alyson Haslam of the Department of Epidemiology and Biostatistics, University of California San Francisco in San Francisco, CA, US and colleagues reported on...
Διαβάστε περισσότερα

0
Tom Freeman is an audio technology professional working in Silicon Valley. At night, he is a music and video producer who works with various...
Διαβάστε περισσότερα

0
Dr. Alyson Haslam of the Department of Epidemiology and Biostatistics, University of California San Francisco in San Francisco, CA, US and colleagues reported on...
Διαβάστε περισσότερα

How to Find an Oncologist Who’s an LGBTQ+ Ally: An Expert Q&A

0
Charles Kamen, PhD, MPH, is a clinical psychologist and assistant professor at the University of Rochester Medical Center. Dr. Kamen has a strong background...
Διαβάστε περισσότερα

0
Do you have a favorite flower? It is very difficult for me to choose a favorite, for there is such a vast array of...
Διαβάστε περισσότερα