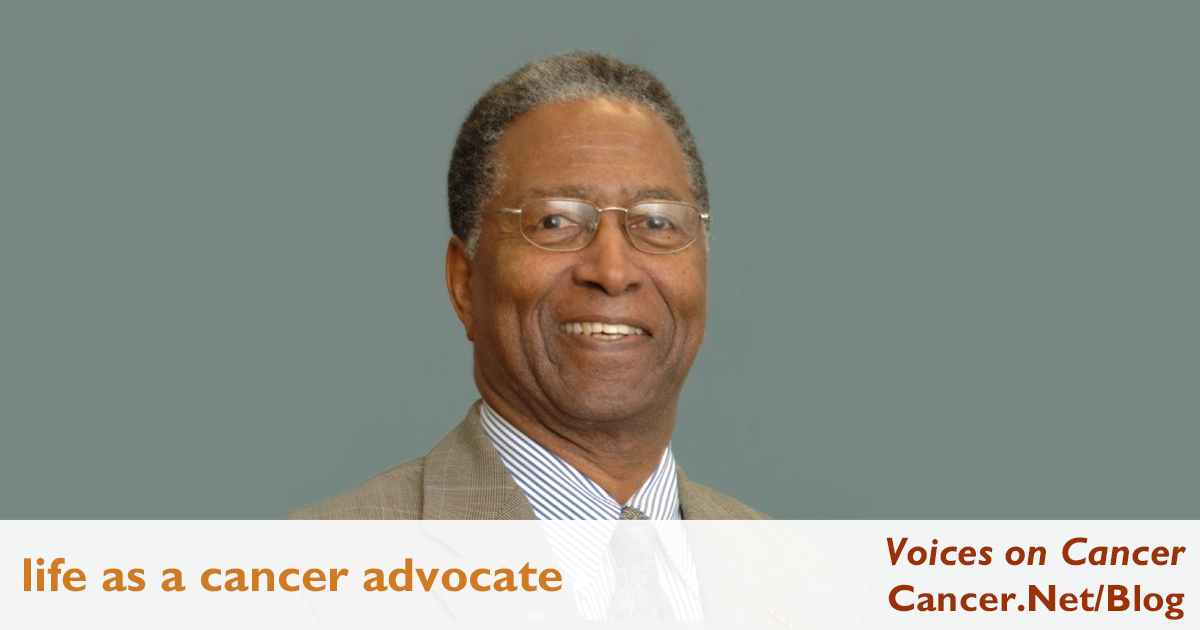 Voices on Cancer is an award-winning Cancer.Net Blog series where advocates share their stories and the lessons they have learned about being a cancer advocate. James E. Williams, Jr., has been a prostate cancer survivor since 1991. He started a consulting firm, Jim Williams and Associates, specializing in human resources management, prostate cancer awareness, education, and advocacy. He retired from the United States Regular Army as a full colonel.

I retired from the United States Army in 1984 after 25 years of service and began a second career in human resource administration. In 1991, I was working as a human resource administrator at the headquarters of the American Bar Association in Chicago, Illinois, when my wife, Lois, suggested that I visit our family physician. I did not believe a visit was necessary because I had recently been given a “clean bill of health” by a flight surgeon that allowed me to keep my private pilot license active. But Lois’ insistence that I visit the family doctor saved my life!

My doctor had begun including the prostate-specific antigen (PSA) test in blood tests for his patients to screen for prostate cancer. At that time, a number below 4 was considered satisfactory, and my PSA number was 10, which suggested that I should be seen by a urologist. The urologist performed a needle biopsy, and the results of that procedure discovered prostate cancer with a Gleason score of 4 + 3 = 7, which meant it was a medium-grade cancer.

The urologist encouraged me to seek second opinions from a radiation oncologist and other oncologists, who he said “look at the cancer world through different lenses” than him. He also made an appointment for me at a cancer center 5 hours away from where I was living in Chicago. When I inquired why, as there were excellent medical facilities and specialists in my city, he stated that this other cancer center was performing many prostate cancer surgeries, and I should take advantage of the expertise I would find there. He was correct, and after review of my medical records and a consultation with a surgeon who specialized in prostate cancer surgery, I decided to have my prostate removed.

On September 27, 1991, the surgeon removed my prostate and diagnosed me with an aggressive stage II prostate cancer. Although no cancer was found outside of the prostate during my surgery, the surgeon suggested adjuvant therapy, which is treatment given after surgery to reduce the risk of recurrence from the presence of undetected disease. I started a 6-month course of hormone therapy, and I have been cancer-free since the completion of this treatment plan in 1992. It has been 29 years—wow!

Ultimately, finding and treating my prostate cancer was a “perfect storm.” I had a primary care physician who introduced a new screening tool into his examination procedures; a urologist who encouraged me to seek second opinions from different doctors with various specialties; treatment at a world-class medical facility; an aggressive surgeon who specialized in the surgery I received, called a radical prostatectomy, which is the removal of the prostate gland, surrounding tissues, and lymph nodes, and who also recommended a second procedure to maximize a good treatment outcome; and a health insurance plan that paid for most of the expenses. While I thought this should be the standard for all Americans, I learned that my story is the exception rather than the rule.

Connecting with the prostate cancer community

Through an article in the local newspaper, my wife discovered and made me aware of Us TOO, an organization that held support group meetings for prostate cancer survivors at a hospital in Chicago just down the street from my office. I was just out of surgery at the time and did not know what was ahead of me on my cancer journey.

Talking openly about the disease with other men who had gone through it gave me hope. They spoke about the sexual side effects of prostate cancer surgery and the potential for recurrence. They exchanged information about clinical trials and research. This support gave me a sense of life beyond prostate cancer, and it inspired me to share my “cancer journey” with others.

As I learned more about prostate cancer, I noticed that men did not seem to attend support groups at the same rates as women, and I learned they were less likely to visit their doctors to talk about their health. I also noticed that my African American peers were typically absent from the support group meetings that had been so integral to my recovery. Finally, I saw how men are less likely to fight for funding in health research for male conditions. These observations and my activities with Us TOO inspired me to become a patient advocate.

Today, I work with several advocacy groups at the local, state, and national levels to raise men’s health awareness issues with a focus on prostate cancer. I served on the Us TOO’s board for 9 years, including time as the organization’s secretary and 6 months as the volunteer executive director. I also serve as chair of the Pennsylvania Prostate Cancer Coalition (PPCC), where we have spearheaded a “Don’t Fear the Finger” campaign that underscores the importance of digital rectal exams in detecting prostate changes. Our group sets up health booths at places where men tend to hang out, such as area Minor League Baseball parks, ice hockey arenas, and breweries. We hand out blue ribbons and ask them, “How’s your prostate today?” In addition, I take at least 4 or 5 calls a month from people who have been newly diagnosed with prostate cancer and are trying to figure out their next steps, as well as from the spouses of people with prostate health problems.

We advocates have a lot of work ahead of us. We start as patient advocates “wrapped around” whatever organ has hurt us, and then we discover that there is a lot of work to be done in several facets of health in addition to a concentration on 1 or 2 organs. But I’ve learned that patient advocacy starts first at home within your own family. In my 1991 holiday letter, for example, I told my family network of my recent cancer journey. I was amazed at the positive feedback thanking me for telling my story.

Learning from other advocacy movements

Changes in health care and policy are often based on advocacy. We as advocates have to make noise if we want to enhance health care in the United States. It is helpful to look at other movements for inspiration. For example, look at what advocates did in promoting better health care for their community after the acquired immunodeficiency syndrome (AIDS) epidemic began. AIDS is now a chronic disease that people can often live with for many years. Or, look at the advocacy efforts of my sisters in the breast cancer advocacy movement. October is the “pink month.” Even the National Football League (NFL) wears pink.

We have not moved the needle much in the area of men’s health. I’d like to see many more blue ribbons during September as Prostate Cancer Awareness Month, for instance. It is still a tremendous challenge, and men don’t often advocate for their health issues. In fact, men often take better care of their cars than their bodies. I often ask those I meet, “Did you take the car in for an oil change and/or inspection because the car was ‘sick’?” They understand preventive car maintenance, but they don’t use the same logic about their own preventive health care. Thus, it can be difficult to beat prostate cancer if a diagnosis is eventually made.

One of our PPCC programs is called “Spare Parts.” It is an effort to get men to come out and tell their stories. These stories are powerful and tend to resonate with an audience more than scientific presentations do. We encourage men to help themselves by helping others.

I spent 25 years as an infantry and artillery officer learning how to destroy people and property. What a joy and blessing it is now to be able to save a few lives through my patient advocacy.

As Use of Genomic Data Expands in Cancer Care, Patients Share...

How Sharing My Story Helps Me Cope With an Advanced Brain...

Sister Is There To Comfort Her Little Brother As He Battles...

What Is Intuitive Eating and How Can It Help During Cancer?

New on NCI’s Websites for December 2022

Should Surgery And Radiation Be The Standard Treatment For DCIS? The...