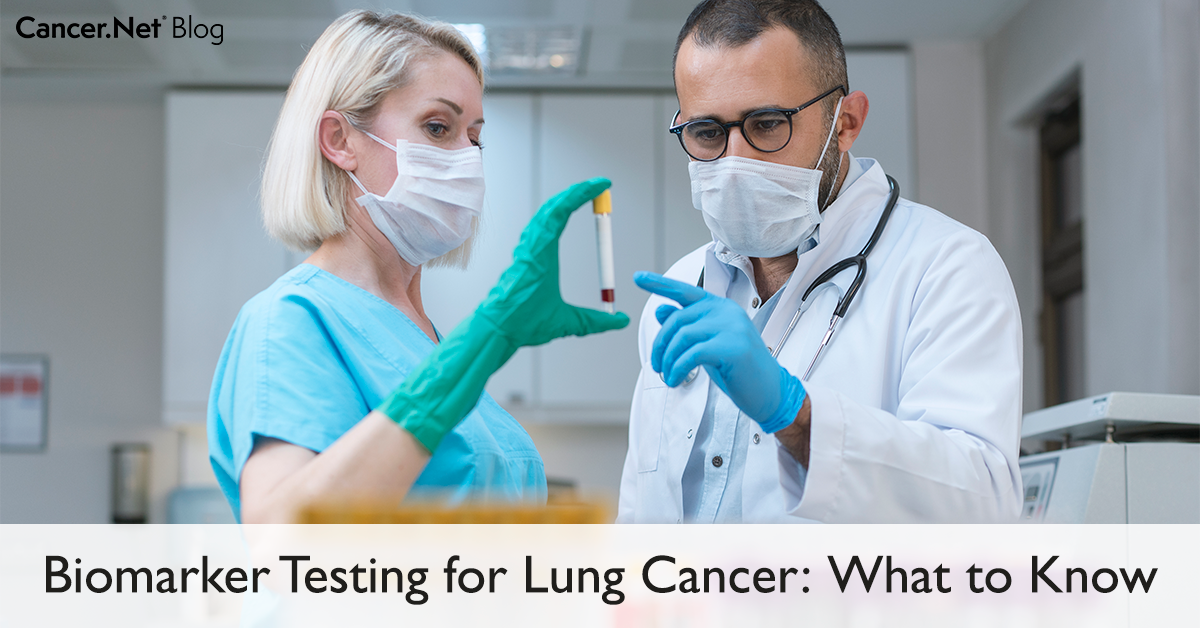 Howard (Jack) West, MD, is the clinical executive director for AccessHope and a medical oncologist specializing in lung cancer at City of Hope in Duarte, California. Dr. West is also the founder of the Global Resource for Advancing Cancer Education (GRACE), a nonprofit organization dedicated to providing timely, free, credible information to people with cancer and caregivers around the world. Dr. West is a 2022 Cancer.Net Lung Cancer Advisory Panelist. You can follow Dr. West on Twitter. View Dr. West’s disclosures.

Biomarker testing, which may also be called molecular testing or tumor marker testing, is when doctors perform detailed studies on tumor tissue taken during a biopsy or blood sample to understand the specific features of a person’s cancer. Biomarkers are substances found in higher-than-normal levels in the blood, urine, or tissues of some people with cancer. Biomarkers can also refer to mutations, changes, or patterns in a tumor’s DNA.

Identifying specific biomarkers of a tumor is important because some mutations, particularly in people with lung cancer, can be “drivers” of the cancer, which means that they may be a primary cause of that cancer growing and dividing.

Why can biomarker testing be helpful in treating a person with lung cancer?

Targeted therapy works by targeting the cancer’s specific genes, proteins, or tissue environment that are contributing to cancer growth. These treatments can then slow, stop, or destroy the cancer. Knowing which biomarkers your lung cancer has is important because, in some cases, there may be a targeted therapy available to effectively block mutations found in the cancer that may be driving the cancer’s growth and survival.

For this reason, biomarker testing is a critical part of planning treatment for any person with advanced lung cancer and potentially other people with other stages of lung cancer. Not all lung cancers have a “driver mutation,” but for those that do and that have an associated targeted therapy available to block that mutation, it is often the most effective approach for treating that cancer. Targeted therapy may also cause fewer side effects than other treatments because it limits damage to healthy cells.

When is biomarker testing done in lung cancer care?

What should people with cancer expect if biomarker testing is recommended for them?

First, know that the process of biomarker testing can take a few weeks. Ideally, the testing can be done from tumor tissue that has already been removed during a biopsy procedure. However, even in this case, testing will still typically take at least 2 to 3 weeks. Sometimes, it may take up to 4 weeks to receive all of the detailed results back from a tumor tissue sample, particularly if the sample has been sent to another facility. However, while waiting for these results may be challenging, remember that the results are of critical importance to your cancer treatment and are needed to guide you to the best treatment plan.

In some cases, when there is not sufficient tissue to do all of the required testing, your doctor may recommend an additional biopsy to obtain more tissue. This could be done through an image-guided approach, such as with a computed tomography (CT) scan, or through a bronchoscopy, during which the doctor takes fluid from outside of the lung.

Another method for biomarker testing in lung cancer that has emerged is called a “liquid biopsy.” During a liquid biopsy, the doctor draws blood and evaluates the plasma for cancer DNA circulating in the bloodstream, which may identify some relevant biomarkers. While the ability to detect biomarkers through this type of biopsy is not quite as strong as that of a tissue biopsy, at least in people with a low volume of cancer in their body, this option does enable more people to receive biomarker testing. Results are often available within 1 to 2 weeks after blood is drawn. Importantly, if a specific mutation is identified through a liquid biopsy, it can be trusted as a valid approach to guide treatment.

What questions should people with lung cancer ask their doctor about biomarker testing?

There are several questions that would be helpful to ask your doctor. These questions include:

1: Has biomarker testing been ordered for me? Why or why not?

This is the first question you should ask.

There may be a reason your doctor has not ordered biomarker testing. For example, you may have an early-stage cancer where the results would not clearly be helpful in guiding treatment recommendations. Or, it could be that you have a subtype of lung cancer that is very unlikely to have a targeted biomarker.

2: Will I need to have another biopsy or blood-based test for biomarker testing?

If your doctor is concerned there isn’t enough tissue for biomarker testing, then a repeat biopsy or sending off a blood-based test may be necessary.

3: Will treatment be delayed until my biomarker testing results are back?

4: Is biomarker testing covered by my health insurance?

It is appropriate to ask this and any other questions you might have about whether biomarker testing is covered by your health insurance. Most insurance providers now consider biomarker testing a standard of care for the groups of patients described above, which means it is often covered.

Can Targeted Therapy for KRAS Mutations Double as Part of Immunotherapy?

2022 ASCO Annual Meeting Research Round Up: New Research in Lung...