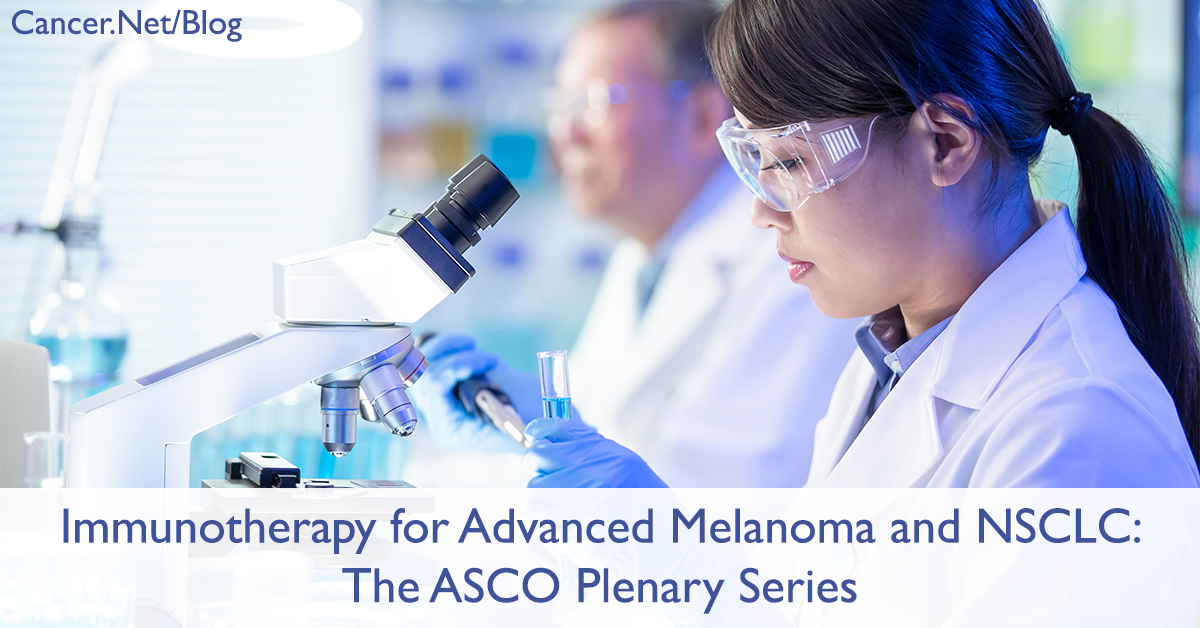 The March 2022 session in the ASCO Plenary Series features 2 studies:

Who does this study affect: People with untreated advanced melanoma.

What did this study find: A new report from the global phase II/III RELATIVITY-047 clinical trial shows that a combination of the immunotherapy drugs relatlimab and nivolumab (Opdivo) remains effective in slowing the growth of untreated advanced melanoma. The combination treatment may also shrink the melanoma and help people with this disease live longer compared with nivolumab alone.

Immunotherapy is a type of cancer treatment that boosts the body’s natural defenses to fight cancer. Nivolumab is a PD-1 immune checkpoint inhibitor that helps the body’s immune system target and destroy melanoma cells. Relatlimab is a type of immunotherapy that targets the lymphocyte-activation gene 3 (LAG-3). The LAG-3 gene controls a pathway that reduces the function of immune cells called T cells. Relatlimab releases the limits put on T cells by LAG-3. In this study, the researchers wanted to find out if targeting both PD-1 and LAG-3 pathways at the same time could slow or stop the growth of the melanoma, shrink the cancer, and help patients live longer.

This study included 714 people from around the world with untreated melanoma that was either metastatic or could not be treated with surgery. Of the participants, 355 received the combination of relatlimab with nivolumab, and 359 received nivolumab alone. The median follow-up was just over 19 months. The median is the midpoint, meaning half of the people were followed for fewer than 19 months and the other half were followed for more than 19 months.

What does this mean for patients: Supporting earlier results from this study, the combination of relatlimab and nivolumab continues to show promise as an effective first treatment for slowing or stopping the growth of advanced melanoma. It may also help people with this disease live longer.

“These findings provide additional evidence of the benefit of two checkpoints over only one and supports the combination of nivolumab and relatlimab, which had a manageable safety profile, as a potential new treatment option for patients with advanced melanoma.”

What did this study find: Results from the phase III CHOICE-01 clinical trial in China show that adding the immunotherapy drug toripalimab (TuoYi) to chemotherapy in people with untreated, advanced NSCLC slowed cancer growth and helped them live longer, particularly if their tumors had certain biomarkers, which are mutations, genes, or patterns found in a tumor’s DNA.

NSCLC is the most common kind of lung cancer, and treatment for advanced NSCLC often includes immunotherapy. Toripalimab targets the PD-1 protein expressed on immune cells. PD-1 interacts with a protein called PD-L1. PD-L1 helps cancer cells hide from the immune system, and people with advanced NSCLC often have higher levels of PD-L1. By blocking the interaction between the PD-1 and PD-L1 proteins, toripalimab helps immune cells find and destroy cancer cells.

What does this mean for patients: The combination of toripalimab with chemotherapy may help slow the growth of untreated advanced NSCLC and help people with the disease live longer, particularly if their tumors have high tumor mutational burden.

“Toripalimab plus chemotherapy represents a first-line treatment option for patients with advanced NSCLC without driver mutations.”

Building Your Fort of Support: Tips from a Breast Cancer Social...

Medical Assistant Diagnosed with Breast Cancer While Volunteering as Patient for...

What Should People With Cancer Know About Alkaline Water?

Rationale Explained for Granting EMA Authorisation for Extended Use of Nivolumab...

Seeing a Promising Future for Progress against Childhood Cancer