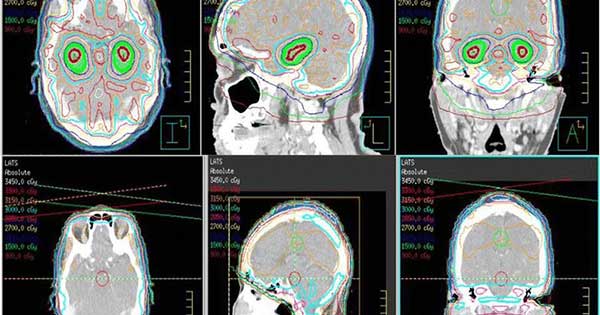 In the NCI-funded trial, patients with brain metastases were treated with the drug memantine (Namenda), which has been shown to help protect cognitive function, and whole-brain radiation therapy (WBRT). Half of the patients, however, received a technically advanced form of WBRT that specifically avoided the hippocampus, an area in the lower-middle portion of the brain.

Compared with patients who received standard WBRT, those who underwent hippocampal-avoidance WBRT were less likely to experience declines in cognitive function, said the trial’s co-lead investigator, Vinai Gondi, M.D., director of research at the Northwestern Medicine Proton Center and the Northwestern Medicine Cancer Center Warrenville. Dr. Gondi recently reported the trial’s findings at the annual meetings of the American Society for Radiation Oncology (ASTRO) and the Society for Neuro-Oncology (SNO).

The results confirm earlier studies that had suggested the hippocampus is highly sensitive to radiation, he said. They also verify that, by sparing the hippocampus, “we can achieve the objectives of protecting patients’ cognitive function, effectively managing their brain metastases, and improving neurological symptoms.”

Christina Tsien, M.D., of the Washington University School of Medicine in St. Louis, speaking at the ASTRO meeting, said that hippocampal-avoidance WBRT now represents a standard of care for patients with brain metastases.

But, Dr. Tsien cautioned, “it’s a complex era” when it comes to treating cancer that has spread to the brain. With multiple approaches and therapies, she continued, treating brain metastases is now “much more nuanced” than it once was.

The goals of and approaches to treating brain metastases can vary, depending on factors like how many tumors are in the brain and the patient’s health status, said Stuart Burri, M.D., chair of Radiation Oncology at the Levine Cancer Institute in Charlotte, NC.

Once cancer has spread to the brain, treatment is largely focused on “improving the patient’s quality of life” by alleviating the neurologic problems that metastatic tumors often cause, Dr. Burri said.

Some targeted and immune-based therapies that attack cancer cells everywhere in the body (systemic treatments) have been shown to shrink brain metastases in some patients. But this is still a small group of patients, he cautioned.

Patients with three or fewer brain metastases typically receive stereotactic radiosurgery, in which high-dose radiation is specifically targeted to individual tumors. This approach can shrink tumors and help control symptoms with less risk of harming cognitive function than WBRT. The trade off, Dr. Gondi said, is that there is a higher risk of tumors developing elsewhere in the brain with stereotactic radiosurgery than with WBRT.

Stereotactic radiosurgery is increasingly being used to treat patients with more than three brain metastases, Dr. Burri said. But many patients still receive WBRT at some point, and nearly half of patients who receive traditional WBRT experience some cognitive decline, Dr. Tsien said. While some of these problems can resolve, others that are sustained and progressive “can be life changing” for patients and their caregivers, she added.

Based on these studies, researchers with the NCI-sponsored NRG Oncology clinical trials group decided to test whether tailored WBRT that avoids the hippocampus could help limit treatment-related cognitive decline.

The approach initially showed promise in a small phase 2 clinical trial. And those findings came not long after results from a large NCI-funded clinical trial showed that memantine could slow the development of WBRT-related cognitive problems, explained Ann O’Mara, Ph.D., R.N., head of palliative research in NCI’s Division of Cancer Prevention.

The next logical question, Dr. O’Mara continued, was: “If we add memantine to hippocampal avoidance, might it reduce the effect [of WBRT] on cognitive function even more?”

The trial, called NRG-CC001, enrolled more than 500 patients with brain metastases. Participants could have any number of brain metastases, but none within 5 millimeters of the hippocampus. Most patients in the trial had lung cancer and approximately 40% of patients had brain metastases as their only site of metastatic cancer.

Participants in the trial completed several different tests commonly used to assess cognitive function when they entered the trial and again at several time points over the ensuing year.

There was no difference in how long participants treated with hippocampal-avoidance WBRT lived overall and without further spread or growth of tumors in their brains compared with those treated with standard WBRT. Illustrating the poor prognosis associated with brain metastases, nearly one-third of the patients died within 4 months of entering the trial.

At the ASTRO meeting, Dr. Gondi reported that, at each testing point in the trial, participants who had undergone hippocampal-avoidance WBRT were less likely to experience cognitive decline—which the researchers defined as a meaningful decrease in scores on any of the cognitive function tests—than those who received standard WBRT.

Overall, patients who underwent hippocampal avoidance had a 26% reduced risk of experiencing cognitive decline. Patients in this group who were age 61 or younger were less likely to experience cognitive decline than those who were older, but patients benefited from the approach regardless of age.

At the SNO meeting, the researchers presented a more detailed breakdown of the cognitive function testing results. The benefits of hippocampal avoidance, they reported, came largely in the areas of executive function—the ability to perform common daily tasks—and learning and memory. Patients also reported significant improvements in neurologic symptoms.

“We found that patients who received hippocampal avoidance reported improved cognition, less fatigue, improved ability to speak, and better preservation of their ability to remember things,” said the trial’s other co-lead investigator, Paul Brown, M.D., of the Mayo Clinic.

Overall, the trial’s finding should be viewed in the context of the use of WBRT prior to the earlier trial of memantine, he said. When the findings from the memantine trial and this recent trial are combined, he continued, the combination of hippocampal avoidance WBRT and memantine may be able to reduce the risk of radiation-related cognitive decline by more than 40% compared with WBRT used alone.

Expanding Use of Hippocampal Avoidance?

Dr. Burri agreed that the findings are very important and should change practice. Smaller studies provided convincing evidence “that you’re not doing any harm [to survival] with hippocampal avoidance,” he said. But “it wasn’t clear until these new data that it was actually superior” to standard WBRT in terms of protecting cognitive function.

Although it takes some training to be able to perform hippocampal-avoidance WBRT, Dr. Burri said, most hospitals and centers that perform radiation therapy should be able to offer it.

In the meantime, further studies are under way to better understand the role of this approach. NRG Oncology, for example, is conducting an NCI-funded trial to test hippocampal avoidance during prophylactic cranial radiation therapy in people with small cell lung cancer, in whom brain metastases are particularly common.

And studies are just beginning to look at how hippocampal avoidance WBRT performs in patients who have received prior immunotherapy or targeted therapies.

0
A young boy in England got quite the surprise when he was handed a check for a job well done! The boy’s mom, Laura-Nicole, shared...
Διαβάστε περισσότερα
World News

SABCS 2021: New Research and Updates in Breast Cancer Treatment and Side Effects

0
The 2021 San Antonio Breast Cancer Symposium (SABCS) was held from December 7 to 10 in San Antonio, Texas, and online. In this podcast,...
Διαβάστε περισσότερα
World News

0
As part of Cancer Research UK’s ongoing commitment to improving the diversity of the organisation, the charity has today published its gender pay gap...
Διαβάστε περισσότερα

0
A young boy in England got quite the surprise when he was handed a check for a job well done! The boy’s mom, Laura-Nicole, shared...
Διαβάστε περισσότερα

SABCS 2021: New Research and Updates in Breast Cancer Treatment and Side Effects

0
The 2021 San Antonio Breast Cancer Symposium (SABCS) was held from December 7 to 10 in San Antonio, Texas, and online. In this podcast,...
Διαβάστε περισσότερα

0
As part of Cancer Research UK’s ongoing commitment to improving the diversity of the organisation, the charity has today published its gender pay gap...
Διαβάστε περισσότερα

0
COMBI-i did not show a statistically significant difference in investigator-assessed progression-free survival (PFS) in the broad population of patients with BRAF V600–mutated metastatic melanoma treated in...
Διαβάστε περισσότερα

0
When 19-year-old John Wallop arrived for his 16-hour shift behind the deli counter at Wawa in Millville, New Jersey, he thought it would just...
Διαβάστε περισσότερα