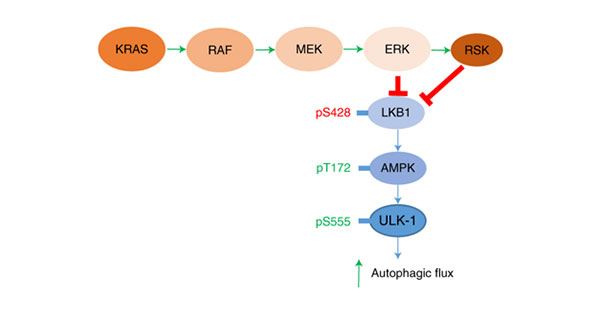 Three independent studies suggest a way to indirectly thwart a mutated gene that drives tumor growth in 95% of people with pancreatic cancer.

The changed gene, KRAS, has proven to be one of the most elusive targets in cancer research.

Currently there are no approved drugs that target mutated KRAS proteins (made from the altered KRAS gene) directly. There are drugs that target KRAS indirectly by blocking proteins that interact with it, but they have been ineffective against pancreatic cancer in clinical studies.

In these new studies, however, the researchers found that drugs that block the activity of KRAS-interacting proteins force cancer cells to rely on a way of creating energy called autophagy. They then showed that a combination of two drugs—one that indirectly targets KRAS and one that blocks autophagy—shrank pancreatic cancer tumors in mice.

“If you hit cancer cells with a single drug, they have the ability to adapt,” said the leader of one of the studies, Channing Der, Ph.D., of UNC Lineberger Comprehensive Cancer Center. “To decrease the chances that cancer cells can escape, [we] hit them with two drugs at a time.”

The findings have led to two clinical trials of such combination treatments in people with pancreatic cancer: one that is already enrolling participants and a second that is expected to launch in the near future.

Because the KRAS gene is mutated in nearly 30% of all cancers, including some types of colorectal and lung cancer, this approach potentially could be applicable to a lot of people, said Eileen White, Ph.D., of Rutgers Cancer Institute of New Jersey, who made key discoveries that set the stage for these studies.

Drugs that indirectly block KRAS are effective against some types of cancer, but in most cases the disease eventually returns.

“If you could add an inexpensive drug that is well-tolerated,” she said, referring to the autophagy inhibitor used in the studies, “and get a subset of those patients to have long-lasting responses, that would be a major achievement.”

Why Is KRAS So Hard to Hit?

Though researchers identified KRAS as an important treatment target for cancer decades ago, it has long been considered an “undruggable” protein. That’s because the protein lacks obvious places to which a small-molecule drug can bind and impair its function.

That view is changing, however, as scientists—including those that are part of the NCI-funded RAS Initiative—have been making progress on their goal to target mutant RAS proteins.

Another approach has been to target proteins with which KRAS interacts. Mutant KRAS produces continuous growth signals that get handed off from one protein to the next in a kind of chain reaction referred to as a signaling pathway.

More than six signaling pathways stem from KRAS; if one is impaired, the others can pick up the slack or circumvent it, explained one study’s lead investigator, Ji Luo, Ph.D., of NCI’s Center for Cancer Research.

That may be why drugs that block one KRAS signaling pathway can slow the growth of cancer cells but don’t usually kill them, noted Martin McMahon, Ph.D., of Huntsman Cancer Institute at the University of Utah, who led the third study.

Researchers have instead turned to a combination approach that hits multiple weak spots in the KRAS signaling pathways and other connected pathways at the same time.

These studies are “a great push forward to help establish the importance of this concept,” said Dr. White.

To identify the most effective combination, Dr. Luo and his team devised a novel strategy to target several proteins at one time using combinations of small lab-made RNA molecules that suppress the production of specific proteins (called small interfering RNAs).

The team blocked proteins in six KRAS signaling pathways and in pathways, such as the autophagy pathway, that help cells survive stress caused by mutant KRAS. All in all, they investigated the effects of nearly 400 different protein combinations in normal human cells and in human KRAS-mutant pancreatic and colorectal cancer cells.

The researchers eventually discovered the optimal combination that killed cancer cells without harming healthy cells: targeting an autophagy protein and two proteins in a RAS signaling pathway known as the MAPK pathway.

They then showed that eliminating the autophagy pathway made KRAS-mutant cancer cells more sensitive to treatment with trametinib (Mekinist), a drug that blocks a protein in the MAPK pathway.

The study, published February 1 in Proceedings of the National Academy of Science, was part of a long-standing collaboration between Dr. Luo’s lab and NCI’s RAS Initiative.

Dr. Der and his colleagues reached a similar conclusion through different methods. In their study, published March 4 in Nature Medicine, the researchers asked whether mutant KRAS was to blame for the high levels of autophagy commonly observed in pancreatic tumors.

They were surprised to find that, in KRAS-mutant pancreatic cancer cells, blocking KRAS or the MAPK pathway sped up autophagy while slowing other energy-producing pathways.

The team speculated that this disruption of energy production may cause pancreatic cancer cells to rely more heavily on autophagy—and therefore become more vulnerable to drugs that target it.

They turned to an autophagy inhibitor called hydroxychloroquine and a drug that blocks a protein in the MAPK pathway. In mice transplanted with KRAS-mutant human pancreatic tumors, treatment with both drugs together slowed tumor growth and extended survival more than either drug alone.

And the combination was synergistic, meaning that the combined effect of the two drugs was greater than simply adding the effects of each drug on its own.

Evidence in Other Cancer Types and the First Patient

Dr. McMahon and his team added more evidence to support this approach and carried the hypothesis even further. Their findings were also published March 4 in Nature Medicine.

These researchers found that the combination of hydroxychloroquine and trametinib almost completely eliminated KRAS-mutant pancreatic tumors in mice.

The two-drug combination also shrank tumors in mouse models of melanoma and colorectal cancer harboring a mutation in another RAS gene or the gene for a protein in the MAPK pathway.

The only obvious side effects from the treatment in the mice were rash and hair loss—both of which were lessened when the hydroxychloroquine dose was decreased.

While carrying out these lab experiments, study investigator Conan Kinsey, M.D., Ph.D., of Huntsman Cancer Institute, was also caring for a patient who was showing signs that his metastatic pancreatic cancer had come back. After getting surgery and several lines of chemotherapy, the patient had run out of treatment options.

Hydroxychloroquine and trametinib are approved by the Food and Drug Administration for the treatment of malaria and melanoma, respectively.

In compliance with ethical guidelines, Dr. Kinsey offered the patient compassionate use and off-label treatment with trametinib and hydroxychloroquine, and the patient accepted.

Within 2 months, the patient’s blood levels of CA 19-9, a marker for pancreatic cancer, fell by 95%. After 4 months, the amount of cancer in his body was reduced by 50%.

The patient experienced fatigue and a rash from the treatment. Though the investigators monitored him closely for other side effects associated with the drugs, none were observed.

Although the patient ultimately died from complications of the disease, “he got 6 to 7 months of good-quality life at a point where he had expended all of his therapeutic options,” noted Dr. McMahon.

While all three teams expressed excitement over this novel approach, they also cautioned that there is still a long way to go before they know what kind of impact it might have.

For example, Dr. Luo noted that only some of the KRAS-mutant cancer cell lines his team tested were sensitive to combined suppression of the MAPK and autophagy pathways, suggesting that not all tumors will react the same way.

But, on the basis of their findings thus far, Dr. McMahon said he’s hopeful that the hydroxychloroquine and trametinib combination will be an effective therapy for some patients with pancreatic cancer.

His team plans to analyze tumors of clinical trial participants to try to identify biological characteristics that may indicate which people are more likely to respond to the treatment. Such an analysis could reveal potential ways to improve the approach, he said.

Tucatinib Added to Trastuzumab and Capecitabine Continues to Demonstrate a Significant...

Oral Cancer Taught Me How Much Words Matter

How will new cancer medicines be approved in the future?

Seeing a Promising Future for Progress against Childhood Cancer

ESMO’s Expert Consensus: Do Not Discontinue or Delay Cancer Treatment That...