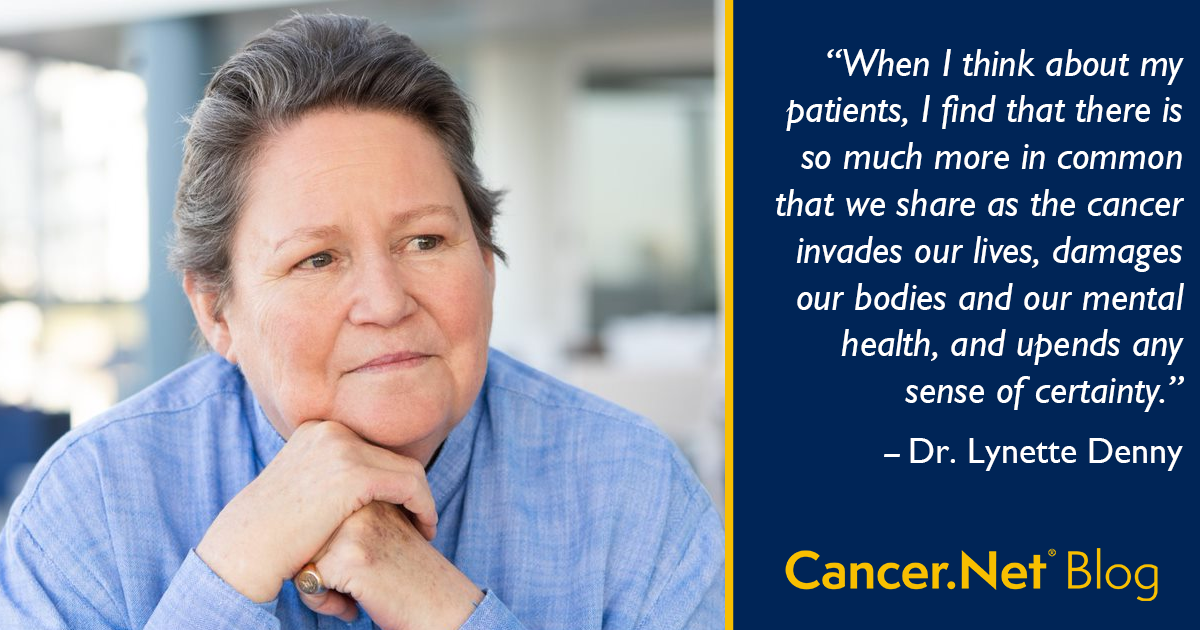 Lynette Denny, MBChB, MMED, FCOG, PhD, FRCOG, is a gynecologic oncologist who has been working in the field of cervical cancer prevention since 1995. Dr. Denny’s tenure as head of obstetrics and gynecology at the University of Cape Town in South Africa ended in April 2022, and she is now a professor of special projects in the Department of Obstetrics and Gynaecology at the university. Dr. Denny is also the director of the South African Medical Research Council’s Gynaecological Cancer Research Centre and was recently awarded the Order of the Baobab by the President of South Africa for “distinguished service to our country.” View Dr. Denny’s disclosures.

“So, what actually happened?” I kept asking myself months after being diagnosed with breast cancer, developing post-operative complications and a stinking wound, and undergoing 6 months of chemotherapy. I found myself hairless, dazed, and bewildered. It was like a bad dream.

So, how did it all begin? In June 2011, the alarm clock rudely awakened me before the crack of dawn. I don’t know why, but I examined my breasts and felt a lump. “Need to do something about that,” I thought. But first, there was another busy day, week, and month ahead. I forgot about my body needing maintenance, and I had little patience or time to give it the attention it needed.

Nearly 6 weeks later, the rude alarm clock woke me again and, for some reason, I examined my breasts again. This time, there was no denying the lump I felt. After all, I am an obstetrician and gynecologist (OBGYN) and a gynecologic cancer specialist who has examined the breasts of countless patients over the past 20 years. So, I contacted my colleague who was head of breast surgery in my hospital and, in no time, my diagnosis was confirmed, the tests were done, and my operation was scheduled.

Ten days later, I woke up with both breasts removed. The next few weeks were and remain a blur of disasters, including post-operative sepsis and a family issue involving one of my closest relatives. Then, there was the chemotherapy. Each day, I folded deeper and deeper into myself, shutting down, hiding under a deep layer of armor. I felt no real pain except for ripples of fear that were quickly silenced with cliches and false reassurance.

Getting back to work after cancer

At the time of my diagnosis, I had just been made acting head of the Department of Obstetrics and Gynaecology and was formally appointed to the post in January 2012. This meant a whole heap of new roles, responsibilities, duties, meetings, and commitments. I had no time and no space for my cancer.

So, 6 months after treatment, I was back into work full speed ahead: holding clinic, performing surgery, teaching, researching, traveling, disseminating research findings, writing papers, and collaborating. I experienced many intervening health problems during that time and was frustrated with my body always demanding so much attention. “Leave me alone, please, I have work to do,” I would say in silent note-to-self communications. But as fast as I would crash physically, I would recover just as quickly. Fall and rise became my life’s pattern.

After my diagnosis and treatment, life continued unchanged with no adjustments to the daily order of things. In August 2020, my oncologist discharged me 9 years post-diagnosis, and I could officially go forth and be free. It seemed this seriously annoying imposition on my life was over.

In November 2020, it became time for cancer to “be the disease that doesn’t knock before it enters,” as Susan Sontag said in Illness as Metaphor. I had excruciating back pain that took my breath away with how severe it was. In the midst of the COVID-19 pandemic with restrictive access to medical tests and imaging, I managed to get a magnetic resonance imaging (MRI) scan done. And there it was: a huge cancer involving my thoracic vertebrae that was encroaching on my spine and was very close to causing spinal compression, according to my oncologist.

First, there was panic. Then, I received an emergency admission to the hospital for 2 weeks of radiation therapy followed by a major surgery that involved the insertion of rods and screws and a huge brace to hold it all together. To me, it was another massive interference in my busy, busy, busy life. I found it so totally annoying. But all of my attempts at denial were thwarted by side effects, many of which are too horrible and too humiliating to mention.

I would experience moments of dreadful self-pity and terrible fear of losing my independence and losing my place in the world. I would feel swaths of profound grief and helplessness against this disease that was so much more powerful than I and was trying to crush my lifeforce with anaconda-like strength. Some nights were drenched in tears, hopelessness, a sense of failure, and regret. “Is this what life is?” I would think. “Really? How terribly disappointing. All that work, all that passion, and for what? Despair.”

But one morning, my lifeforce fought back. “This far and no further,” she proclaimed. “You will get up, you will stand, and you will walk back into this world with determination, gentleness, and grace.”

There and then began the journey to which I am still deeply connected. The journey of “this is what it is” and “now is the time to interrogate, navigate, and integrate.” Now, I am to be curious and be here. No more rigid, life-defying armor. Today, I have dropped the metaphor and the rhetoric of the war paradigm when talking about cancer. War implies winners and losers. And while it may motivate some people with cancer to develop a “fighting spirit,” for many others the metaphor creates fear and guilt and leaves them feeling disempowered, bewildered, and hopeless. For example, it may cause someone to think, “I have failed my family because I did not win the war.”

It has now been 27 years since I first started caring for people with gynecologic cancers. Along with my team, we have operated on and treated thousands of patients, all uninsured and supported by the public health system, and most living in poor socioeconomic circumstances. While we have been able to provide care for patients along the entire cancer continuum, the impact of cancer on the lives of the patients we have treated is vast, complex, and multifactorial. The burden cancer has placed on my patients’ lives ranges from severe financial distress, also called “financial toxicity,” to loss of employment and income; threats to relationships, including with family and close community members; and psychological, emotional, and spiritual anguish.

Many of my patients come from geographically distant areas and have often had to face huge obstacles to reach and stay in care. I have seen firsthand how cancer magnifies the many disparities in health care experienced globally that cause immense and unnecessary suffering.

The difference between what many of my patients experience and what I have experienced in my cancer journey is the timeliness and ease of access to care and information that I have had, along with the huge benefits of being insured with income protection. These and other factors have made my cancer journey less onerous, less strenuous, and more bearable. But still, when I think about my patients, I find that there is so much more in common that we share as the cancer invades our lives, damages our bodies and our mental health, and upends any sense of certainty. This is a journey for us all to share.

How the history of medicine influenced our perception of cancer

Cannabis, cannabinoids and cancer – the evidence so far