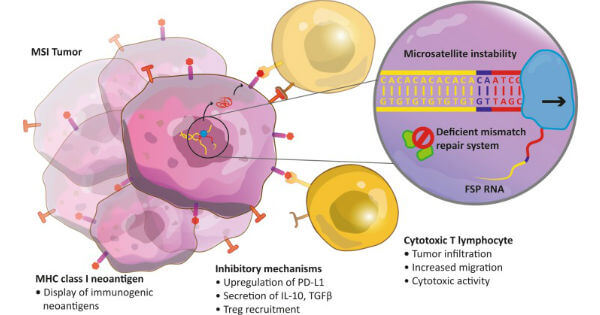 On July 10, the Food and Drug Administration (FDA) approved the combination of two immunotherapy drugs—ipilimumab (Yervoy) and nivolumab (Opdivo)—for the treatment of some patients with metastatic colorectal cancer who have been treated previously with standard chemotherapy drugs.

Tumors that have either of these genetic features tend to have high rates of DNA mutations. Some of these mutations may lead to the production of many abnormal antigens that can be targeted by immune cells.

Researchers have found that several immune checkpoint inhibitors are effective in patients with MSI-H or dMMR tumors, and this work has led to FDA approvals.

In 2017, FDA approved the checkpoint inhibitor pembrolizumab (Keytruda) for the treatment of MSI-H or dMMR tumors, regardless of where in the body the cancer started. This was the first FDA approval based solely on the presence of a genetic feature in a tumor.

The approval was a step forward for precision medicine, noted James Gulley, M.D., Ph.D., head of the immunotherapy section of NCI’s Center for Cancer Research.

A few months later, FDA approved nivolumab for patients with MSI-H or dMMR metastatic colorectal cancer that has progressed after chemotherapy.

The new FDA approval was based on results from the CheckMate-142 study, which was funded by Bristol-Myers Squibb, the manufacturer of ipilimumab and nivolumab.

Among 82 patients in the trial who received the combination immunotherapy, 3 had complete responses and 35 had partial responses, for an overall response rate of 46%. In addition, 89% of the responses lasted 6 months or longer, according to FDA.

The FDA statement noted that the overall response rate among a similar group of 58 patients who received nivolumab alone was 28%, with 67% of the responders having responses that lasted 6 months or more.

The most common side effects among the patients receiving ipilimumab and nivolumab included fatigue, diarrhea, fever, musculoskeletal pain, and abdominal pain. The combination immunotherapy had a “manageable safety profile,” the researchers wrote in a report on the CheckMate-142 study earlier this year.

Although CheckMate-142 did not include an arm testing pembrolizumab in the same patient population, Dr. Gulley noted that the response rates for both are similar (46% for the combination and 40% for pembrolizumab alone)—and higher than that for nivolumab alone (28%).

“This combination immunotherapy is an important additional option for patients,” he said, noting that pembrolizumab, as a single agent, may have fewer side effects than the two-drug combination.

“We don’t know if there are patients who would respond to nivolumab and ipilimumab who wouldn’t respond to pembrolizumab or vice versa,” Dr. Gulley continued.

One Family’s Mission to Stop Hair Loss from Chemotherapy: Your Stories...

Dad Creates Inclusive Children’s Book For Daughter With Disability And Others...

New on NCI’s Websites for November 2021

Suzanne Somers Discusses Her Cancer Diagnosis And Thinking Of Her ‘Mortality’