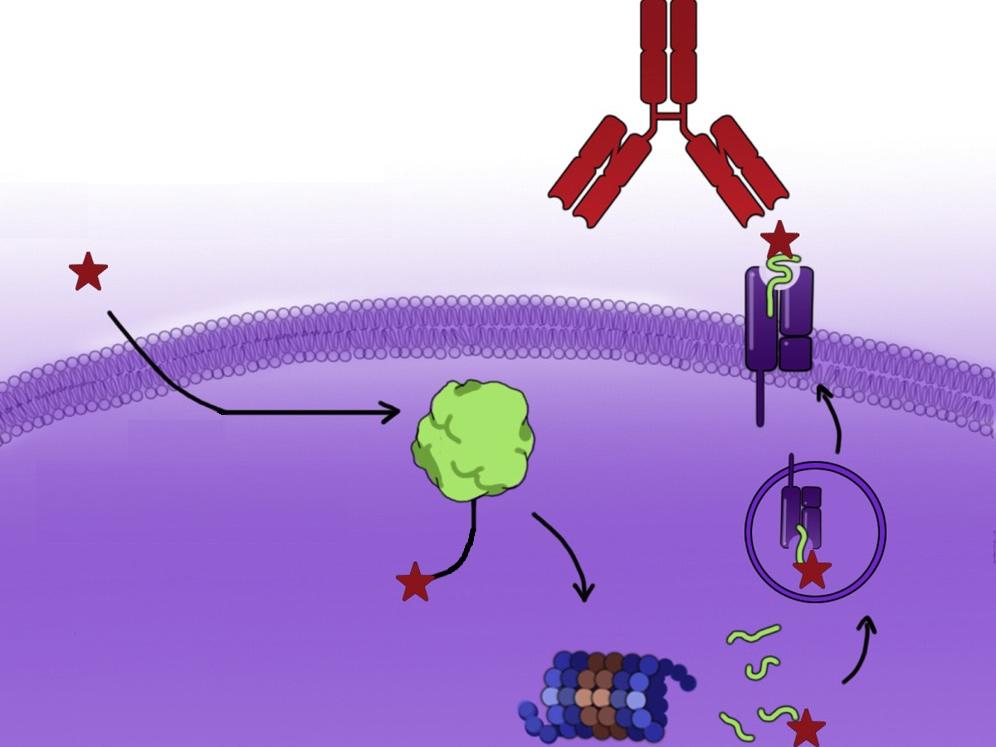 Some of the deadliest cancers have mutations in a gene called KRAS. The recent development of drugs that can kill cancer cells with these mutations has been heralded as a major breakthrough. But in nearly all patients, tumors eventually become resistant to these drugs, and they stop working.

Two research teams have now developed a way to overcome this resistance that may enable KRAS-targeted drugs—and perhaps drugs that target other mutant cancer-causing proteins in cancer cells—to pull double duty as an immunotherapy.

The new approach takes advantage of the natural process by which cells break down proteins into fragments called peptides. Both teams found that, as a result of this process, fragments of the molecule that is formed when KRAS-targeted drugs bind to the mutant KRAS protein move to the surface of a cell. Once there, it can potentially flag the cell for destruction by the immune system.

In the UCSF study, the researchers engineered an antibody that helped kill cancer cells that were resistant to an experimental KRAS-targeted drug known as ARS1620.

What’s exciting about this approach is that it “combines targeted therapy with immunotherapy,” said Kevan Shokat, Ph.D., of UCSF, who co-led the study. “Usually, these two things don’t come together.”

In the NYU Langone study, the research team engineered an antibody that helped kill cancer cells that were resistant to the recently approved KRAS–targeted drug sotorasib (Lumakras).

“Even when genetic and other changes frustrate targeted therapies, they often still attach to their target proteins in cancer cells, and this attachment can be used to label those cells for immunotherapy attack,” Shohei Koide, Ph.D., of NYU Langone, who co-led the study, said in a news release.

Ji Luo, Ph.D., of NCI’s Center for Cancer Research, who was not involved in either study, called the new approach “very clever.” Dr. Luo cautioned, however, that these are proof-of-principle studies and that more research is needed before this approach can be tested in humans.

KRAS is involved in controlling how cells grow and their ability to survive. It normally cycles between off and on states as needed, but the G12C mutation keeps KRAS in the on state, triggering uncontrolled cell growth. For many years, researchers tried unsuccessfully to develop drugs that would block the abnormal KRAS protein from sending growth signals.

Finally, nearly a decade ago, Dr. Shokat and his colleagues were the first researchers to show that it was possible to develop a drug that could attach itself to the KRAS G12C protein and disable it.

Not all tumors with a KRAS G12C mutation respond to these drugs, however. And even those that do tend to quickly develop resistance to them.

Immunotherapy, which uses the immune system to fight cancer, has been proposed as an approach to overcome this resistance. However, studies combining sotorasib with a type of immunotherapy called checkpoint inhibitors found that the combination treatment could lead to severe side effects.

For these new studies, the question was whether immunotherapy could be harnessed in a different way, to go after tumor cells specifically. In particular, both teams wanted to see if the mutant KRAS–targeting drug could act as a hapten—that is, as a small molecule that can elicit an immune response when attached to a larger molecule, such as a protein.

“We thought, if this drug becomes part of the protein, and the protein comes up on the cell surface, that’s something the immune system could see,” Dr. Shokat said.

In the UCSF study, the researchers used ARS1620, which was the KRAS G12C inhibitor furthest along in testing when they began the study. They found that when ARS1620 bound to mutant KRAS protein inside cancer cells, the drug-protein molecule, or complex, is degraded and a fragment of the resulting structure (called a haptenated peptide) is displayed on the surface of the cancer cell. Once there, it acts like a beacon for the immune system.

Normally, the immune system has a difficult time distinguishing between normal and cancerous cells, because the changes that turn a cell cancerous are hidden within the cell.

“[This approach] creates an ‘eat-me’ signal” for the immune system, said Charles Craik, Ph.D., also of USCF and one of the lead researchers on the study.

The researchers then tested billions of human antibodies and found one that binds to the haptenated peptide on the surface of the cell. They used it to engineer a type of antibody, known as a bispecific T cell engager, to link the complex on the cancer cells to T cells, a type of immune cell, in the vicinity of the tumor.

In lab experiments, the antibody helped the T cells find and kill KRAS G12C mutant cancer cells that were treated with ARS1620. The approach worked whether or not the cells were resistant to the drug.

In the NYU study, just as in the UCSF study, when KRAS G12C mutant cancer cells were treated with sotorasib, fragments of the mutant KRAS–sotorasib complex traveled to the cell surface. The research team, led by Dr. Koide and Benjamin G. Neel, M.D., Ph.D., however, took a somewhat different approach with their engineered antibody drug, which they call a HapImmune antibody.

Their antibody only binds to the sotorasib–KRAS G12C protein complex on the cell surface when it is part of another specialized complex, known as a major histocompatibility complex, or MHC. Cells use MHC complexes to tell the immune system that what they are displaying is dangerous and needs to be eliminated.

In laboratory studies, this antibody successfully killed lung cancer cells with the G12C KRAS mutation that were resistant to sotorasib.

Expanding to other KRAS-targeted drugs

Dr. Luo pointed out that several issues need to be addressed in additional studies as well as in animals before this type of antibody therapy can be tested in clinical trials.

Drs. Koide and Neel of NYU Langone showed their approach can potentially get around this challenge. Because the HapImmune antibodies bind to the drug–KRAS G12C complex only when it’s part of an MHC, they only attacked cancer cells and did not bind to free-floating drug. In the study, the antibody killed sotorasib-resistant cancer cells even when sotorasib levels were similar to what would be seen in patients.

The UCSF team is also working on ways to overcome the binding issue and are testing their approach with sotorasib and other drugs that target mutant KRAS. For example, they have identified antibodies that recognize the sotorasib-modified protein complex, including one that binds to the drug–protein complex but not to the drug by itself.

With those antibodies, “it’s about a 350-fold difference in terms of binding to the free drug,” Dr. Craik said.

He pointed out, however, that this approach would not work in cases where, for example, additional mutations in the gene block the drug from binding to the mutant protein, cutting off the drug’s ability to form the complex that produces the eat-me signal.

In an editorial accompanying the UCSF study, William A. Freed-Pastor, M.D., Ph.D., and Andrew J. Aguirre, M.D., Ph.D., of Dana-Farber Cancer Institute, said that it will be important to test whether the antibodies can be combined with KRAS-targeted drugs without causing severe side effects.

They also note that antibody drugs could potentially be developed to target mutations in other genes, which “opens up an exciting new area for drug discovery.”

As the NYU study showed, that is already happening. In addition to developing antibodies that kill cancer cells with KRAS mutations that have been treated with targeted therapies, the NYU team has also developed antibodies that kill cancer cells treated with targeted therapies directed against other mutant cancer-fueling proteins. They include osimertinib (Tagrisso), which targets mutant versions of the EGFR protein and is commonly used to treat lung cancer and ibrutinib (Imbruvica), which targets the normal BTK protein and is used to treat leukemia and lymphoma.

Dr. Neel noted that, with this new immunotherapy approach, there’s also the potential that the targeted drugs don’t need to be able to kill cancer cells, only to be able to bind to their target.

“A given drug would only need to flag cancer cells, not fully inhibit them,” he said in a news release. That would offer “the possibility of using drugs at lower doses” and decreasing the risk or severity of side effects.”

Metformin May Affect Risk of Breast Cancer in Women with Type...

What Cancer Caregivers Should Know About Hospice Care at Home: A...

Science Surgery: ‘How are children’s cancers different from adult’s cancers?’