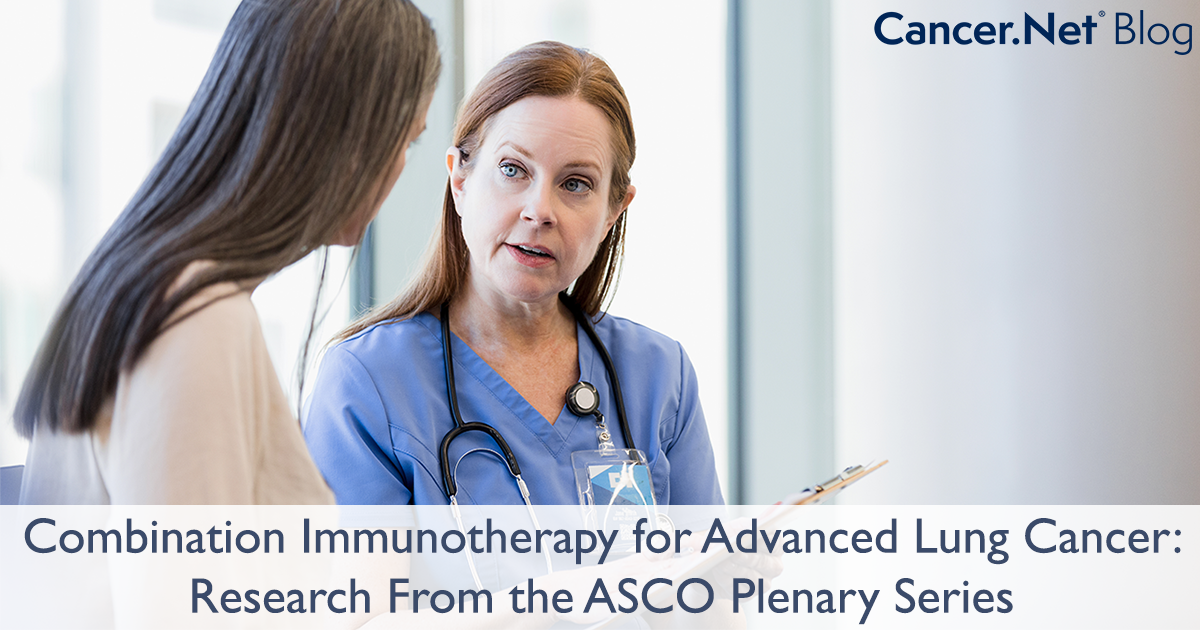 The December 2022 session in the ASCO Plenary Series features a study in advanced lung cancer.

What did this study find? Data from the phase 2 ARC-7 study showed that an immunotherapy combination worked twice as long as using a single immunotherapy drug in the treatment of stage IV NSCLC with a high level of PD-L1 expression.

Immunotherapy is a fast-growing field in the treatment of advanced NSCLC, but the existing treatments tend not to work for a long time for many patients. Immunotherapy is a treatment that uses the body’s natural defenses to fight cancer by improving the immune system’s ability to find and attack cancer cells. In this study, the researchers used combinations of experimental immunotherapy drugs to see if they stopped the tumors from growing. Domvanalimab is a monoclonal antibody that targets the TIGIT receptor. Previous studies have had difficulty proving that the TIGIT receptor is an effective target for the treatment of lung cancer. Zimberelimab is an immune checkpoint inhibitor that targets PD-1. Etrumadenant is an immunomodulatory drug that targets adenosine receptors.

This study included 150 participants. At the time when the data were analyzed, the researchers had results from 133 patients. The participants had been evenly distributed among 3 groups:

What does this mean for patients? This is an early study, but it shows that advanced lung cancer responds to combinations using domvanalimab and that the cancer was stopped for twice as long as compared with zimberelimab used alone. Further phase 3 studies are in progress to study whether this treatment is more effective than other standard treatments for NSCLC. This study may also help show that TIGIT is an effective target for the treatment of NSCLC.

“The current standard-of-care for many patients with stage IV non-small cell lung cancer is a single immunotherapy drug but only a fraction of patients will truly benefit over the long term. Identifying novel combination treatments is critical to improving patient outcomes. We are particularly encouraged by the number of patients benefiting at 6 months as evidenced by tumors being stable or shrinking. It should be noted that this is an interim analysis and the data will continue to mature with longer follow up.”

Mom Walks In To Comfort Scared Son After Surgery And Sees...

How to Prepare for Lung Cancer Treatment to Help With Recovery

This Amazing Woman Can Smell Alzheimer’s, Parkinson’s, and Cancer Years Before...

Antitumour Activity and Favourable Safety Demonstrated After Treatment with Nivolumab and...

Oral Cancer Taught Me How Much Words Matter