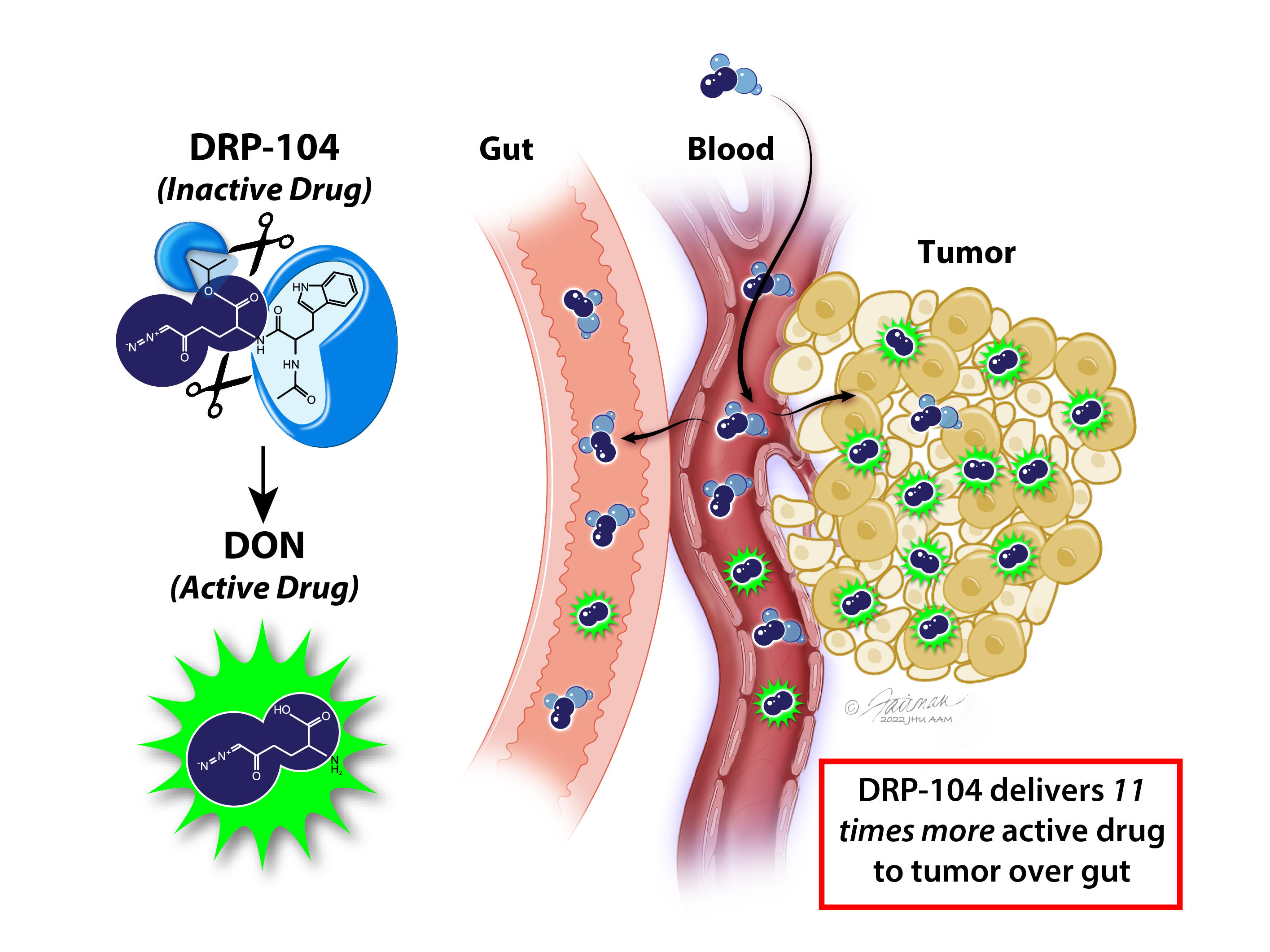 Many drugs tested as cancer treatments have shown great promise in shrinking or eliminating tumors but failed in one crucial aspect: They also damage healthy tissues, causing serious side effects.

Damage to normal tissues and organs can limit the dose of a drug or the amount of time a drug can be given, or exclude it from further testing outright. In a new study, NCI-funded researchers designed a novel way around this problem for one drug. They modified a once-promising chemotherapy drug that had been abandoned due to damage it causes in gut tissues into a compound with “on” and “off” switches.

The “on” switch was designed to be triggered by enzymes found in tumors but not normal tissues, converting the compound into an active cancer drug. The “off” switch is activated by molecules in the gastrointestinal tract, making the compound difficult to convert into an active drug and avoiding unwanted tissue damage.

When tested in mice, the new drug, called DRP-104, delivered 11 times more cancer-killing compound to tumor cells than to cells in the gut. DRP-104 was as good at eliminating tumors as the original drug. But it didn’t cause any substantial damage to normal gut tissues.

“This enabled us to get this therapy back into [clinical trials],” said Barbara Slusher, Ph.D., of Johns Hopkins University, who co-led the study with Rana Rais, Ph.D. DRP-104 is now being tested in an early-phase study in people with advanced cancer.

In addition to directly killing tumor cells, the new drug also had another, equally important, effect: It boosted the ability of a type of immune cell called a CD8+ T cell to kill cancer cells, helping to prevent tumors from coming back, the research team reported on November 18 in Science Advances.

“To have a drug that kills cancer cells but activates immune cells is unique,” Dr. Slusher said.

Targeting drug delivery specifically to tumors has proven to be an effective treatment approach, said Weiwei Chen, Ph.D., of NCI’s Division of Cancer Treatment and Diagnosis, who was not involved with the study. Many drugs now use what are called carrier molecules, like antibodies, to deliver toxic drugs to their tumor target.

But with DRP-104, Dr. Chen continued, “this is a very different form of tumor-targeted delivery.”

Cutting off a tumor’s fuel source

A hallmark of tumors is their insatiable appetite for energy, to fuel their rapid growth and division. So drugs that disrupt cancer cells’ energy supply, called metabolic inhibitors, are a promising avenue for development.

In particular, cancer cells are heavily reliant on an energy source called glutamine. Targeted drugs have been developed that block one particular enzyme involved in glutamine metabolism, Dr. Slusher explained.

“That works for a little bit,” she continued. “But the cancer cells [eventually] figure out how to work around it,” she said.

DON, the chemotherapy drug that was the basis for DRP-104 and was first studied by NCI in the 1950s, works differently. It’s extremely similar in its chemical makeup to glutamine, and this similarity allows it to gum up the works of the entire system that cancer cells use to turn glutamine into energy. In early studies in people with cancer, it showed a promising ability to shrink tumors.

But DON also caused devastating damage to the gut, including sores, bleeding, and diarrhea, leading it to be abandoned.

To see if modifying DON chemically could allow it to get to tumor tissue safely, the researchers developed a series of prodrugs for testing. Prodrugs are compounds that are harmless when first taken into the body. But once they arrive at appropriate locations in the body, they’re broken down to release an active drug.

Prodrugs aren’t a new concept in cancer treatment. Examples of prodrugs currently in wide use include abiraterone acetate (Zytiga), which is used to treat some types of prostate cancer, and capecitabine (Xeloda), a mainstay of colorectal cancer treatment.

But these drugs only have an “on” switch—a way for the body to turn them into the active chemotherapy when they reach tumor cells. Dr. Slusher and her team wanted to give their drug an extra layer of safety—the “off” switch—to further protect the gut.

The researchers created hundreds of potential DON-based prodrugs and winnowed them down through a series of lab tests. The most promising, DRP-104, had two chemical groups attached to the original DON compound.

In cancer cells, these chemical groups are removed by two specific enzymes (esterases and serine proteases), releasing DON, which can then bind to and shut down multiple enzymes involved in breaking down glutamine for energy. But the enzymes in healthy gut cells remove only one of the added chemical groups. As a result, DRP-104 folds into an inactive molecule that traps the DON inside.

In additional experiments, both DON and DRP-104 caused tumors formed from human lymphoma cells to disappear in mice after 2 weeks of treatment. But, as was seen in the earlier human trials, DON caused substantial damage to the gut of the mice, leading to severe weight loss or even death. In contrast, none of the mice given DRP-104 showed serious damage to the gastrointestinal tract.

An earlier study in which Dr. Slusher was involved, led by Jonathan Powell, M.D., Ph.D., also from Johns Hopkins, suggested that DRP-104 might also affect the immune system’s response to tumors. That study found that while inhibiting glutamine kills cancer cells, it simultaneously causes certain T cells to switch to another energy-producing pathway that makes them much more active.

So in this new study, the researchers also tested DRP-104 in combination with an immune checkpoint inhibitor. They found that the combination was substantially better at shrinking tumors in the mice than either drug alone. Mice that received the combination also lived longer.

And when mice whose tumors had disappeared after receiving both drugs were reimplanted with the same cancer cells 2 months later, their immune systems recognized the danger and eliminated the cells before they could grow. DRP-104 had triggered immune-system memory, which then boosted CD8+ T cells that could kill tumor cells, effectively serving as a vaccine against recurrence, Dr. Slusher said.

The ongoing trial in people is taking a similar approach, combining DRP-104 with the immune checkpoint inhibitor atezolizumab (Tecentriq), as well as testing it alone. Several other studies in mice have also suggested that combining metabolic inhibitors with immune checkpoint inhibitors like atezolizumab produces a stronger response against tumors than either drug alone, Dr. Slusher explained.

“It’s going to be important to see how this works in [early] trials,” said Dr. Chen. Glutamine metabolism plays an important role in organs besides the gut, she explained, so whether doses of DON released by DRP-104 could cause problems in other tissues remains to be determined.

But if DRP-104 spares other organs and tissues from damage due to DON, “I think this could be a really exciting path forward for this drug,” she said.

Using the prodrug approach to revisit other drugs like DON that showed promise but had unacceptable side effects is definitely worth pursuing, Dr. Slusher said.

“That’s what our lab is doing now,” she said. “We’re going back to other toxic compounds that were active [against cancer] and seeing if we can divert them to the tumor, not the organs where they caused damage.”

How Adolescent and Young Adult Cancer Survivors Can Cope With the...

Rapid, Robust and Durable Antitumour Activity of Pralsetinib in Patients with...

Data Shows Women Are Not Getting Access To An Important Part...

How Adolescent and Young Adult Cancer Survivors Can Cope With the...